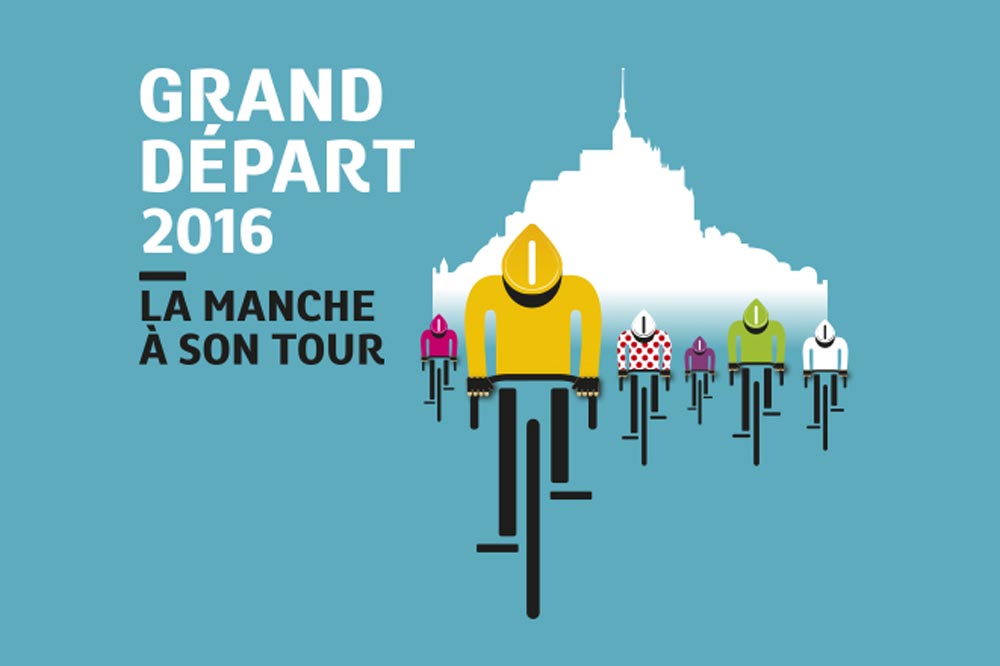 Grand Départ of the 2016 Tour de France: the

The details for the Grand Départ of the 2016 Tour de France were announced at mid-day by Tour de France Director, Christian Prudhomme, and Jean-François Le Grand, President of the Manche General Council in the heart of the Mont-Saint-Michel Abbey. The peloton will set off on Saturday July 2, 2016 from the foot of the "Marvel of the Western World" for three days of racing in the department that will host start of the Tour de France for the first time.

In the aftermath of the Grand Départ in Corsica, Yorkshire and Utrecht in Holland in 2015, a spectacular visual feast will be part of the program for the beginning of the 2016 Tour, which will set off from the foot of the Mont-Saint-Michel. The riders will first follow the bay then, after crossing the Cotentin Peninsula, will head to Utah Beach, one of the 6 June, 1944 landing beaches, situated at Sainte-Marie-du-Mont. This mainly coastal route could expose the riders to wind gusts, but the totally flat profile will most certainly be to the advantage of the teams of the top sprinters.

The 2016 Tour will waste little time in posing a challenge to the contenders. As early as day two of the race, Sunday July 3, 2016, the leaders will have to make themselves and their intentions known and head into battle. After leaving Saint-Lô, the race will make its way towards Coutances then back to the coast with the Channel Islands in the background. But in approaching La Hague, the riders will have to prepare for a more difficult time. The crossing from Cherbourg to Octeville will bring the peloton, or what is left of it, towards the tough La Glacerie climb. At the top there will be seconds to take after a three kilometer ascent with a 14% grade section.

After crisscrossing the department and skirting its coastline, the Tour de France peloton will say goodbye to the Manche on Monday July 4, 2016. Stage three will start from the west coast port and seaside resort of Granville, for a destination that will remain unknown until October 20, 2015, the date of the 2016 Tour de France presentation.

Christian Prudhomme, Tour de France Director: “The Manche is a very beautiful department with breath taking scenery. It offers varied terrain that will favor the sprinters at Utah Beach, and allow the punchers their chance to standout in the hills above Cherbourg-Octeville. Let us not forget the Mont-Saint-Michel that will majestically enhance the very first pedal strokes of the riders of the peloton, three years after it was the backdrop for the 100th Tour de France.”

Jean-François Le Grand, President of the Manche General Council: “It was written that the history of cycling, the Tour de France and the Manche would one day converge. We are proud to offer cycling a sumptuous setting, to promise the Tour de France a warm and passionate welcome and to offer the Manche all the glory it deserves. The coming together of the three during the 2016 start will be magic.”