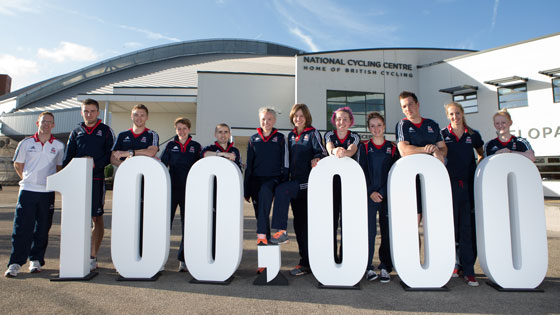 British Cycling’s membership has surpassed 100,000 for the first time in the organization’s history – with the total number of members having doubled since London 2012.

The milestone is a significant step for British Cycling, cementing the organisation’s standing as the largest organisation representing cyclists in Britain.

“I have been a member of British Cycling since I was a teenager. It is incredible how cycling has evolved as a sport in the years since I saw Chris Boardman win gold in Barcelona in 1992.

"Back in those days it felt as if I was the only person on a bike. Today cycling is mainstream and it’s great to see”.

The achievement has been labelled ‘“remarkable” by Olympic gold medallist and British Cycling member Laura Trott, with the success of the Great Britain Cycling Team helping to inspire thousands of people to get on their bikes for fun, fitness or competition.

“It is remarkable to see so many people now riding bikes. With significant investment in creating more welcoming roads and junctions, we really could transform Brits into a nation of cyclists.”

British Cycling’s membership has grown dramatically since 2005, when it stood at just over 15,000 people. Continuous double-digit growth every year since has contributed to the remarkable figure of 100,000.

British Cycling’s president Bob Howden, said:“Our volunteers, clubs, and organisers at all levels have done an amazing job in supporting the growth of our sport to ensure that the inspiration created by our athletes has translated into record numbers of members and participation at all levels.

“With help from our principal partner Sky, UK Sport and Sport England, we have had two successive Tour de France winners in the last two years plus an array of Olympic and Paralympic medals and massive growth in participation at all levels.

“In reaching 100,000 members, we have once again highlighted our ability to achieve ambitious targets. With our members’ backing, we will continue to strive for further elite success, more people cycling more often and greater diversity across the sport as we continue to make cycling appealing to all people.”

“It cements our position as the largest cycling organisation in the country and provides us with a solid platform in our efforts to transform Britain into a true cycling nation.

“We are supporting our membership activities at all levels – from the Great Britain Cycling Team and our talent pathways to entry level racing, young people’s coaching, club racing and our recreational cycling programmes which are helping people to start and stay cycling with British Cycling. However you ride a bike, British Cycling can help you get the most out of it.

“Critically, we are standing up for all cyclists in our efforts to persuade national and local government to invest in cycling. From lobbying for safer roads and junctions to campaigning for all children to learn to ride a bike at school, we are working on behalf of our members to ensure that cycling’s full potential is realised.

“I want to thank everyone involved in cycling for their work to get us here today, particularly those who volunteer in the sport as the growth is predominately being driven by clubs and events participation. We couldn’t have achieved this milestone without them.”

This year, British Cycling launched a new fan product to reflect the growing demand from cycling fans to support the Great Britain Cycling Team at major events. People who sign up to become an official British Cycling Fan can get exclusive offers, including advance priority ticket sales for Britain’s premier cycling events, including the upcoming Track World Cup.

British Cycling has today released an infographic to tell the story of the unique nature of the organisation’s membership.