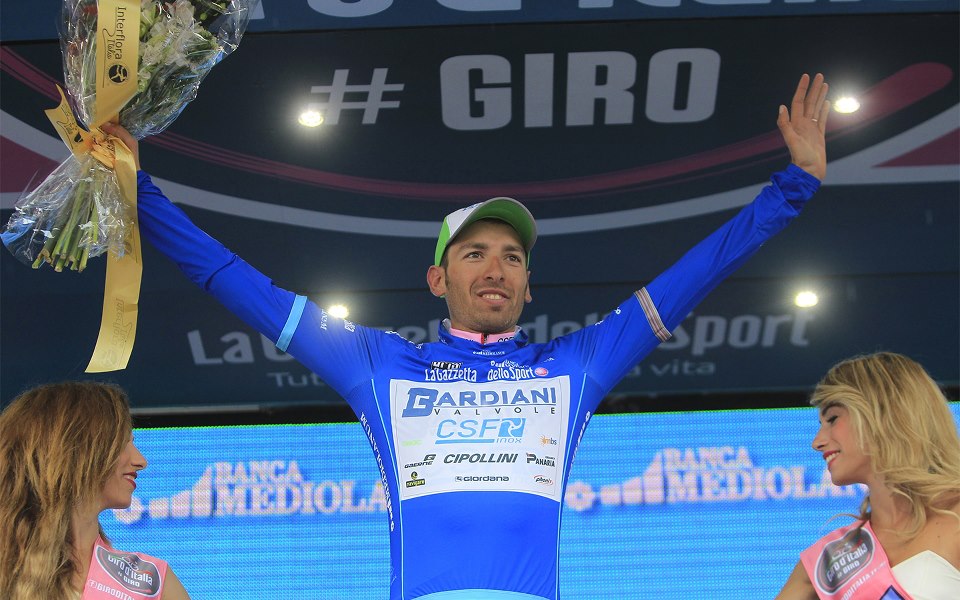 Pirazzi was part of a latent breakaway group containing 26 riders, that didn’t get underway until after nearly two hours of racing.

Meanwhile, Nairo Quintana continued to hold onto the overall race lead, with a substantial gap of 1:41 over Rigoberto Uran and 3:21 over Cadel Evans (BMC Racing).

With 30 kilometers remaining, Thomas Gendt attacked from within the lead group of riders – to go on and tackle the climb of the Muro di Ca’ del Poggio alone. However, as the route began to pitch upward, the Belgian rider started to slow considerably.

From there, Pirazzi emerged from the fractured chase group, and subsequently caught De Gendt just before the summit.

With just over a kilometer remaining, and no rider willing to risk an attack on his own, Pirazzi made his move – immediately opening up a small gap. And, with the four riders behind him failing to organize a counter chase until the final 100 meters, it was too late to catch the Italian rider.

Pirazzi crossed the finish line just ahead of his four breakaway companions to win his first ever Giro d"Italia stage.

The Giro resumes tomorrow, with a 171 kilometer stage from Belluno to Rifugo Panarotta, which contains three categorized climbs – ending with a summit finish.