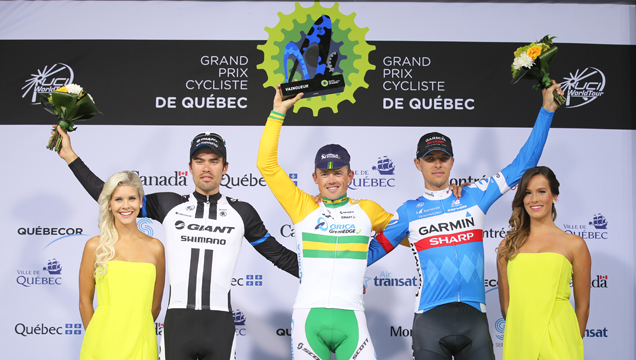 Simon Gerrans surged in the slipstream of Dutchman Tom Dumoulin in the finale to snatch his second victory in the Grand Prix du Quebec on Friday.

Helped by a great collective effort by his Orica Greenedge  team-mates all day, the Liege-Bastogne-Liege winner again triumphed on Grande Allee, like in 2012, with the Australian champion jersey on his back.

Dumoulin had moved just as the race was riding past Porte St Louis and looked ideally placed before Gerrans, led in the finale by Jens Keukeleire, surged in punishing fashion. He also became the first rider to win one of the GPCQM races twice.

"It went perfectly well. I waited for the finale and my team-mates protected me well until the last lap when the favorites got together.
"It’s a very special victory for me as I had great memories from two years ago," he said.

After several vain attempts, the break of the day developed after 14 kilometres and involved Slovenia’s Jan Polanc (Lampre), Italy’s Moreno Moser (Cannondale), Dutchman Dennis van Winden (Belkin) and Japan’s Yukiya Arashiro (Europcar). The four received the go-ahead from the peloton to proceed and their lead topped at 10:42 before the bunch decided to react and reduce the gap.

While Van Winden collected points for the GPM, foliowed by Arashiro, the break was reined in after 140 km as the peloton raised the tempo, led by teams Orica Greenedge, Garmin Sharp and BMC.

But the group never managed to build a gap of over 20 seconds and they were run down at the foot of the last ascent of the Cote de la Potasse as the favorites started to move.

Tom Dumoulin’s attack was blistering but Gerrans was keeping a close watch and played it to perfection in the last 150 metres to win in commanding fashion.

The ambitious Australian made it clear he was now targeting the Grand Prix de Montreal on Sunday, in which he will be a logical favorite.

"I still have two major goals before the end of the season: Montreal on Sunday and the world championships in two weeks."