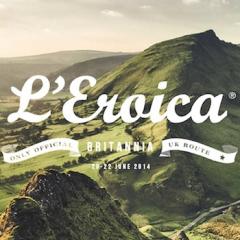 We present L’Eroica Britannia ‘the most handsome bike race in the World’ alongside a 3 day bike and style festival in the green, very pleasant and spectacular lands of the Peak District National Park, UK.

Come to Bakewell the ‘ancient capital of the Peak’ in the heart of The Peak District National Park and join us on our Great British Adventure, 3 weeks before The Tour de France comes to the UK.

Over the 3 days we’re celebrating a very British take on the values of territory, sustainability and the joys of food and drink. The festival’s pinnacle is on the 22nd June with our ‘Great British Adventure’ as we embrace the romantic idea of heroic cycling as it once was, placed alongside aspects of lifestyle, belonging and the Great British Countryside with a 3 route bike tour of The Peak District.

Staying true to L’Eroica Italy – our riders need to observe Ride Day Rules – we call them the ‘Good to Knows’.

Choose from 3 routes all with jaw dropping British scenery resplendent in the English Summertime.

Adventure through – The Monsal Trails. All routes go along and through these incredible marvels of Victorian engineering, our own ‘Strade Bianchi’ – excitingly incorporating a series of outstanding viaducts and tunnels. Enjoy exclusive access into the World famous Cromford Mills Heritage Site, the first water-powered cotton spinning mill in the world also the first to successfully implement the combination of power, machinery and human endeavour which became the basis of modern industrial production. Exclusive: We have gained special permission from the Duke of Devonshire to ride through many of the private routes of the Chatsworth Estate, offering an exclusively private aspect of one of the most famous estates in the UK. Be FIRST to the food stop: each village is a mini gastronomic festival in its own right overflowing with local delights and beer!

All three rides open the eyes and ears of our adventurers to the beauty of the Peak District.

Known as the perfect English market town, it has charm a plenty with its stone buildings formed around little courtyards and its medieval bridge spanning the sparkling Wye. The Start / Finish of the Ride and the host venue for the Festival.

Join us at ‘Little Royal’ Bakewell, pitch your tent and get involved with the best of bicycle heritage and vintage cycle-style. See current bike brands, heritage driven fashion, live entertainment, food and drink markets making this much more than ‘just’ a bike festival. Come and be part of the true L’Eroica values of sustainability, territory, food, heritage and drink set within the lush and rolling lands in the ‘ancient capital of the Peak’ along the banks of the sparkling waters of the River Wye.
A family friendly festival.