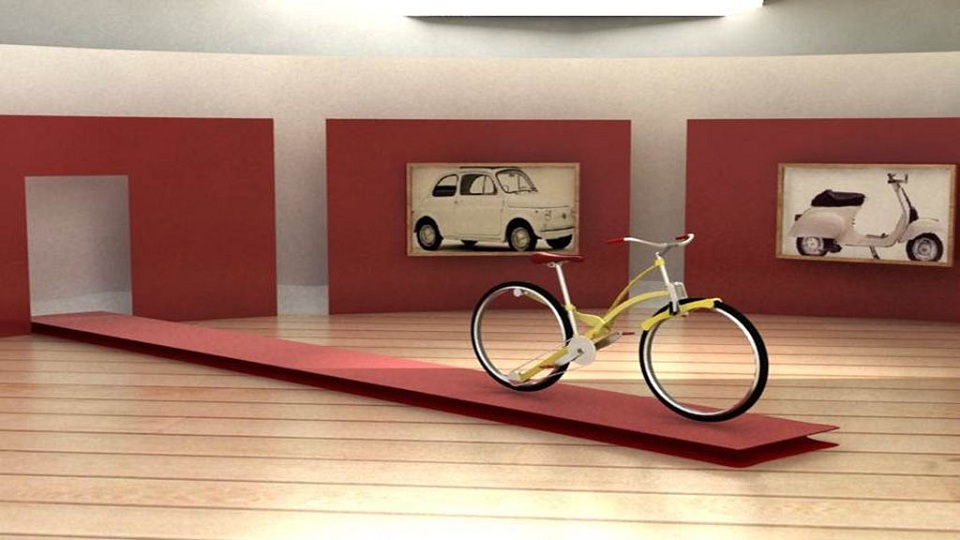 The idea of a folding bike has undertaken numerous studies that focus on reducing the weight and dimensions which have led, however, to realize too small sized bicycles. They have a small frame and wheels at the expense of stability, for the sake of compactness and portability during transport. The minimum size of the frame, in fact, penalizes the rider position while driving and the small size of the wheels significantly are affected by variations in terrain. On the other hand, the traditional bicycles, avoid these problems, but the rigid chassis makes them inflexible during transport on public transport.

The objective of this project is to have a cycle with standard dimensions ( wheels 26 “) and have a small package during transportation. The wheels have no spokes, the minimum size in closing, the system folder with the single movement, the packaging container can also be used as a backpack, are innovations of this script.

The starting point of this research is the study of art that starts from an overview of the urban individual mobility to reach, then, the folding bicycle.

It has been adopted a system of anchoring of wheels composed of small wheels held by a small frame and a specific quick clamping device. They allow you to fold the bike quickly and easily, using its special package like a trendy backpack.

Some studies have been done about characteristics of both components of frame and wheels to analyze their behavior during the application of loads (interference and FEM analysis). In conclusion, the project may pave the way for a new system of mobility outside the classical schemes, widely accessible and easily transportable. Personal style and extreme versatility give dynamism to the traditional bicycle, the subject increasingly required in this environmentally friendly age.

Born in the province of Salerno,  Battipaglia, the  3th January  1984. In the last years of university studies at the Politecnico di Torino, conveys their creativity and skills in the development of the folding bike, without rays which becomes a shoulder backpack and trolley.

On 17th March 2010 he earned a degree in Automotive Engineering  at the Politecnico di Torino  with a thesis on bike patent (vote 109/110).

In October 2010, the Order of Engineers of Turin awarded him with the first place for “IDEA-TO” as the “best innovative thesis of 2010.”

Extends the patent already filed in Europe and USA.

In the years from 2008 to 2010 worked strenuously with enthusiasm to the project, also involving experts and the study of professionals Techno Design.

In December of 2011 ends the construction of the prototype, made ​​of aluminum alloy  with the support of company specializing in precision engineering Palmec snc.