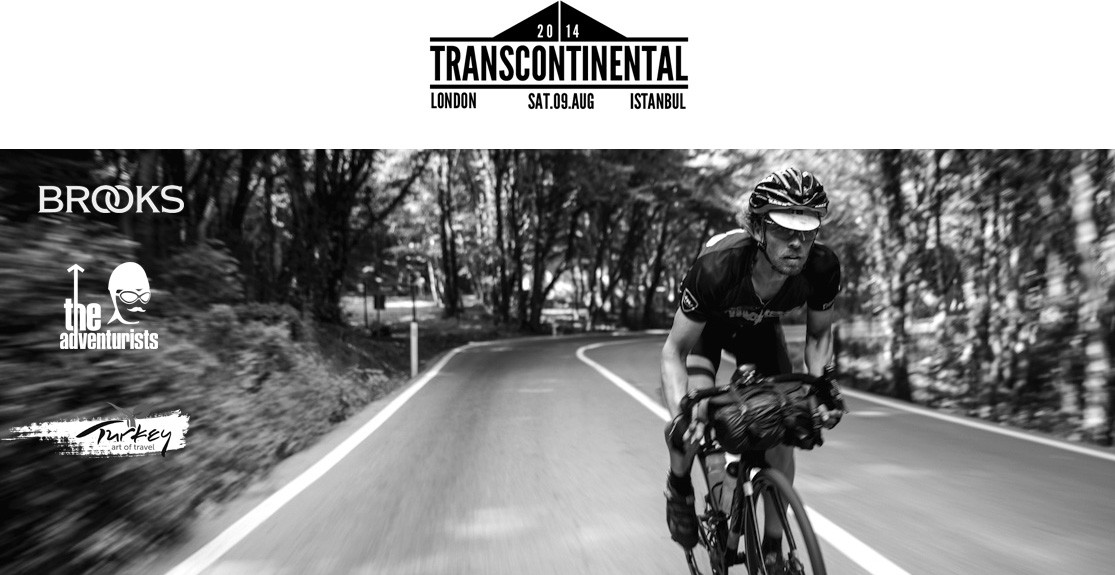 On August 10th, 88 riders assembled in London for  the start of this year’s  Transcontinental race.

A mixture of 16 nationalities, with significant showings from Belgian, German, Greece and Italy,

meant that about half the field had travelled from outside the UK to make the start in the British capital.

Here are some race details and images, as we follow this year’s event.

Riders received their personal satellite tracking devices which will transmit at twice the 2013 frequency for improved tracking rates and were given details of the three controls.

Removed from the second edition are the cobbles of flanders and the Muur Van Geraardsbergen.  Riders will take a southerly exit from the channel, staying in France to steer around Paris to end up in Montgeron which is home to the starting line of the very first Tour de France in 1903.  Today the Cafe Reveil au Matin which hosted the auspicious meeting of likely challengers is a very different place, there is little of the original character remaining and it has been restyled as a Brazilian themed restaurant, but the history is significant and it is here that the riders will get their Brevet Cards signed for the first time.

Onwards to control 2.  The East side of the Stelvio Pass will again feature; being something of a defining feature of the race.  Racers will be plotting a trajectory from much further South however and it will be an altogether different ride from last year, until they are well into the Alps.

Once again they will have to climb to reach the Cima Coppi – be it via Fluela Pass and Oftenpass, or via another route and many of them will make their way down via the same route to progress on through Italy and to the Balkans.

Ferries are permitted again and will provide dilemma and discussion over the best way to tackle the Adriatic.  The Dalmatian coast is a beautiful ride, but not an easy one.  Navigation is at least simple and versus the flatter spin across Italy there is less risk of delay to missed or rescheduled ferries.  Another option is moving inland through Croatia but riders aren’t going to be able to hide from some substantial climbing getting into Montenegro that way.  There’s a reason they call it that.

Control three is the beautiful climb from Kotor Bay to Lovcen National Park via 25 switchbacks, from here the decisions to be made are to head west inland through the mountains of Montenegro and through Serbia or Kosovo to Bulgaria, or to head south through Albania and into Northern Greece.

On Saturday morning at 8 am sharp Big Ben chimed the start of the race.  Riders nervously counted seven strikes before putting their best pedal forward on the eighth.  Favourable winds pushed the those destined for Dover in a South Easterly direction making even the more ambitious sailing schedules achievable and a few wish they’d been more bold at booking time.  Quick out of the blocks and confident enough to bag a noon sailing were likely contenders Richard Dunnett, Josh Ibbett and Kristof Allegaert.  Also on board was Michael Woolridge who was giving them an early run for their money.

The 12:55 sailing from Dover disembarked 40 minutes late adding to the margin further and putting the leaders approximately one and a half hours ahead of the chasing pack after the first seven hours.

To the west another group of riders had taken a southerly exit out of London over the downs and experienced cross winds as they made their way to Newhaven but sailings to Dieppe occur only twice a day, saving energy and an easy 90km ride to wait for the 10:30pm sailing was the order of the day.  Waiting for the sailing would put them back around 8 hours but ultimately save them 100km.  Further west still a third group of riders had opted for Portsmouth and while they didn’t have the same wait they were riding into the wind and taking a 5hr crossing.  Some had the plan to take a nap and save themselves needing to sleep later.  They would also arrive on French soil with a shorter, faster run into Paris and avoid needing to negotiate its middle.

Of the strategies Dover – Calais was clearly the favourite of the serious racers, choosing not to spend any time waiting and more time cycling, putting down the extra miles in much less time than would be saved.  Arguments of fresher legs for those who rode shorter distances won’t stick the longer the clock runs and the more miles that accumulate for all.  It was Michael Woolridge of the four front runners who stopped first near Amiens, 120km North of Paris for a 6 hr stop.  Kristof Allegaert also stopped to the North of Paris near Beaumont around midnight local time, while Ibbett and Dunnett pedalled into day two and through the centre of Paris towards the first Control.

In the early days of bicycle racing there was a time when plucky riders took on long hard stages alone with no team cars and no soigneurs to look after them.  They were hardy and desperate men who ate what they could get, slept when they could and rode all day.  They weren’t professional athletes or men of means, they were “mavericks, vagabonds and adventurers” who picked up a bicycle and went to seek their fortune.

The founders of the Tour de France wanted to create a race of thousands of miles of cycling, whatever the weather and road conditions where “even the best will take a beating”  Often they would race through the night to distances of over 400km each day in stages that would take more than 18 hours.  Henri Desgrange, the father of the tour once noted that “the ideal Tour would be a Tour in which only one rider survives the ordeal.”

Running from the streets of London, to the tip of Asia via Parisian Suburbs, the high cols of the Eastern Alps and the rugged dalmatian coast, the Transcontinental is part Brevet, part Ultra Marathon and part Bikepacking Race.  Call it what you will, it fills a need for those who want to see a distance race of a magnitude and difficulty that would rival the so called toughest races on earth but without the ecological footprint of vehicle support and a cost of entry that would exclude Desgrange’s tourist routiers.  For us though it also pays homage to those courageous souls of yesteryear and re-kindles the adventurous spirit of the early grand tours .

One stage – The clock never stops.  Racers chose where, when and if at all to rest.

No Support – Racers can only use what they take with them, or what they can find en-route at commercially available services.

No Route – Between London and Istanbul only two mandatory controls ensure that racers visit some of the most famous pieces of road in Europe and connect with the suffering of their forebears.  The rest is up to them.

Live Tracking – Unlike the races of the 1900s, which featured much skull-duggery and deviousness which eventually saw the stages made shorter and more controlled and bike racing become more professional, through the miracle of modern satellite technology and the interweb we can check up on our riders progress wherever they may be.  So too can you wherever you may be.  Don’t forget to share.