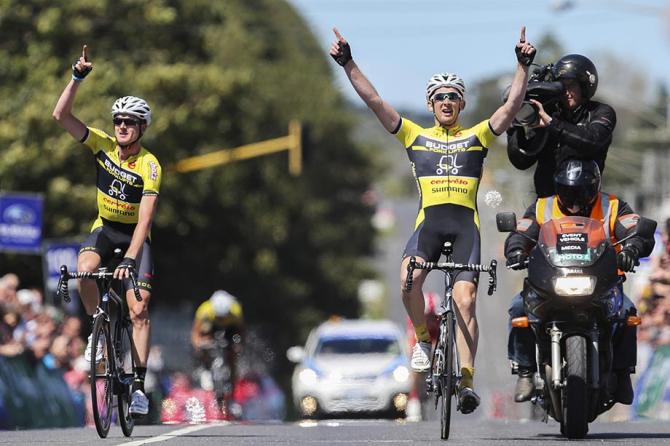 cycling classic in a team trifecta, sealing his victory ahead of his Budget Forklifts team-mates Jack

Horgan attacked a reduced peloton with five kilometers remaining, chasing down a fading breakaway group before powering ahead to the finish line sealing line honours in his maiden Melbourne to Warrnambool.

“I’m absolutely ecstatic,” said Horgan who also took out the Tour of the Great South Coast which concluded in Warrnambool in August.

“I have never done this race before but it’s been a big target of mine, I’ve worked hard towards it and it’s really meaningful to win a race I’ve wanted so much,” said an emotional Horgan who had clinched the win in front of his partner who had travelled from New Zealand to watch.

Inside the final two kilometers, Horgan was joined by team-mate Anderson with the two working together to the finish before Anderson pushed his team-mate forward ensuring a one-two victory.

Kauffman rounded out the podium when he attacked the remaining breakaway riders and soloed into third place five seconds after his team-mates. The trio made history with their efforts – the result marking the first time that the podium had been made up of only one team or club in the races’ 118 year history.

“I definitely won’t regret as Sam is one of the nicest guys you will come across," Anderson said. "Either of us could have had it today and hopefully that’s a little bit of payback from some of the help he has given me this year,” said Anderson who is set to join the Pro Continental ranks with Drapac next year.

From there Horgan made a solo move before Anderson and later Kauffman followed.

“As we were coming across to the group we could see them slowing up and playing cat and mouse,” explained Horgan. “We caught them at about three kilometres to go and I attacked straight away, I didn’t hesitate.

“I had a gap by myself up the final climb, I turned around and it was Jack coming across to me and we both buried ourselves to get to the finish.”

The historic race took riders on a 256 kilometer journey from Werribee to Warrnambool with 136 riders from 238 starters completing the gruelling day.

Some favourable winds allowed Horgan to complete the race in a course record time of six hours and 32 minutes.