2013 Super Prestige Cyclocross Round 1 at Ruddervoorde 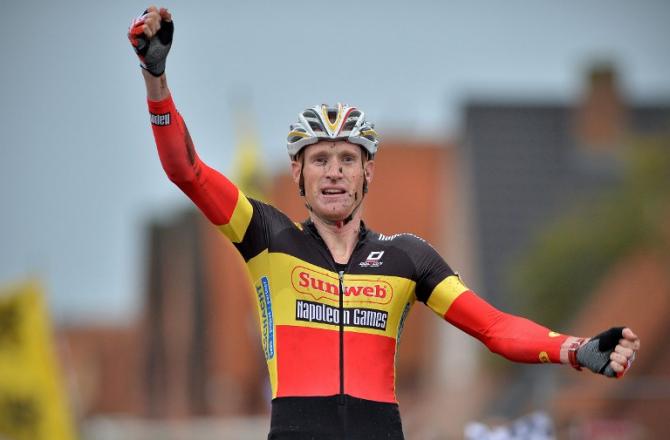 Klaas Vantornout won round 1 of the 2013 Super Prestige Cyclocross in Ruddervoorde, Belgium today – distancing himself from World Champion Sven Nys and Tom Meeusen by a few seconds in the final lap.

After leading earlier in the race, Niels Albert drifted to fifth, behind Lars van der Haar, who won yesterday’s first round of the elite men’s World Cup series.

Vantornout set the pace from the outset of the race – taking the hole shot and subsequently creating a gap over his rivals. By the end of the opening lap Vantornout was joined by Nys, Van der Haar and Meeusen at the head of the race with Albert chasing alone in fifth place.

At one point during the second lap, Albert bridged his way to the leading group of four – and then went on the attack. By the end of the third lap, the Belgian rider had created a gap of 8 seconds over Vantornout, Nys, Van der Haar, and Meeusen.

By the fourth lap, Albert had  extended his lead over the chase group by several more of seconds. However, on lap five Vantornout dropped his chase companions and bridged across to Albert. Nys and Meeusen rode together in pursuit of the two leaders while Van der Haar was dropped and left to ride alone in fifth place. Nys proceeded to distance himself from Meeusen, and by the end of the fifth lap he had reached Albert and Vantornout at the head of the race.

Nys then initiated an attack with only Vantornout initially able to respond. Albert and Meeusen tried to keep the two leaders in sight, while Van der Haar moved to within a few  seconds of them. However, he was unable to close the gap.

On the penultimate lap Meeusen dropped Albert and once again found himself at the head of the race with Nys and Vantornout. Barely able to hang unto Nys or Vantornout, Meeusen managed to stay with them  each time they upped the pace.

Meanwhile, Van der Haar caught Albert and the pair entered the last lap 14 seconds down on the lead trio.

The stage concluded with a showdown of power in the final lap, wherein Vantornout proved to be too strong for Nys and Meeusen.