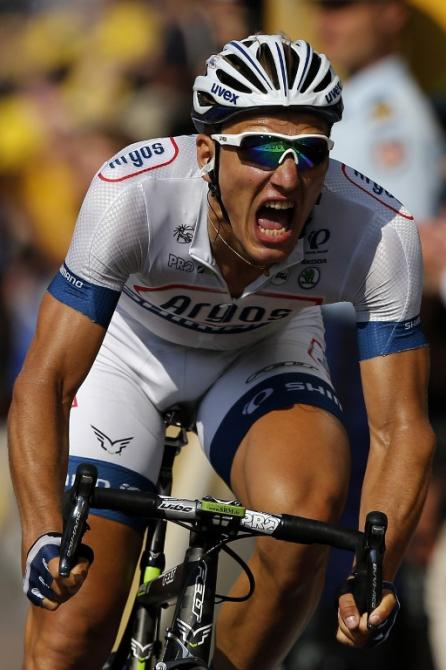 Marcel Kittel scored a second victory in this year’s Tour de France by winning stage 10 in Saint-Malo today. The German rider was the first to cross the finish line in a bunch sprint – nixing Andre Greipel in the final 100 meters.

With 27 kilometers remaining, the peloton had reduced their lead to less than a minute.

As the main field was starting to come back together, Saxo-Tinkoff tried to split the group again, along with an effort by the Garmin team to move riders Talansky and Martin up to the front. However, once the Lotto Belisol, Omega Pharma-Quickstep and Argos-Shimano teams took control, the remaining members of the breakaway were caught in the final 6 kilometers.

At one point, it appeared as though Lotto Belisol would deliver Greipel to victory, but the German champion opened up the sprint too early and was subsequently overpowered by Kittel just before the line.

Chris Froome retained his overall race lead. He even managed to gain a few seconds over his rivals after today’s finish.