Federico Bahamontes the “Eagle of Toledo” 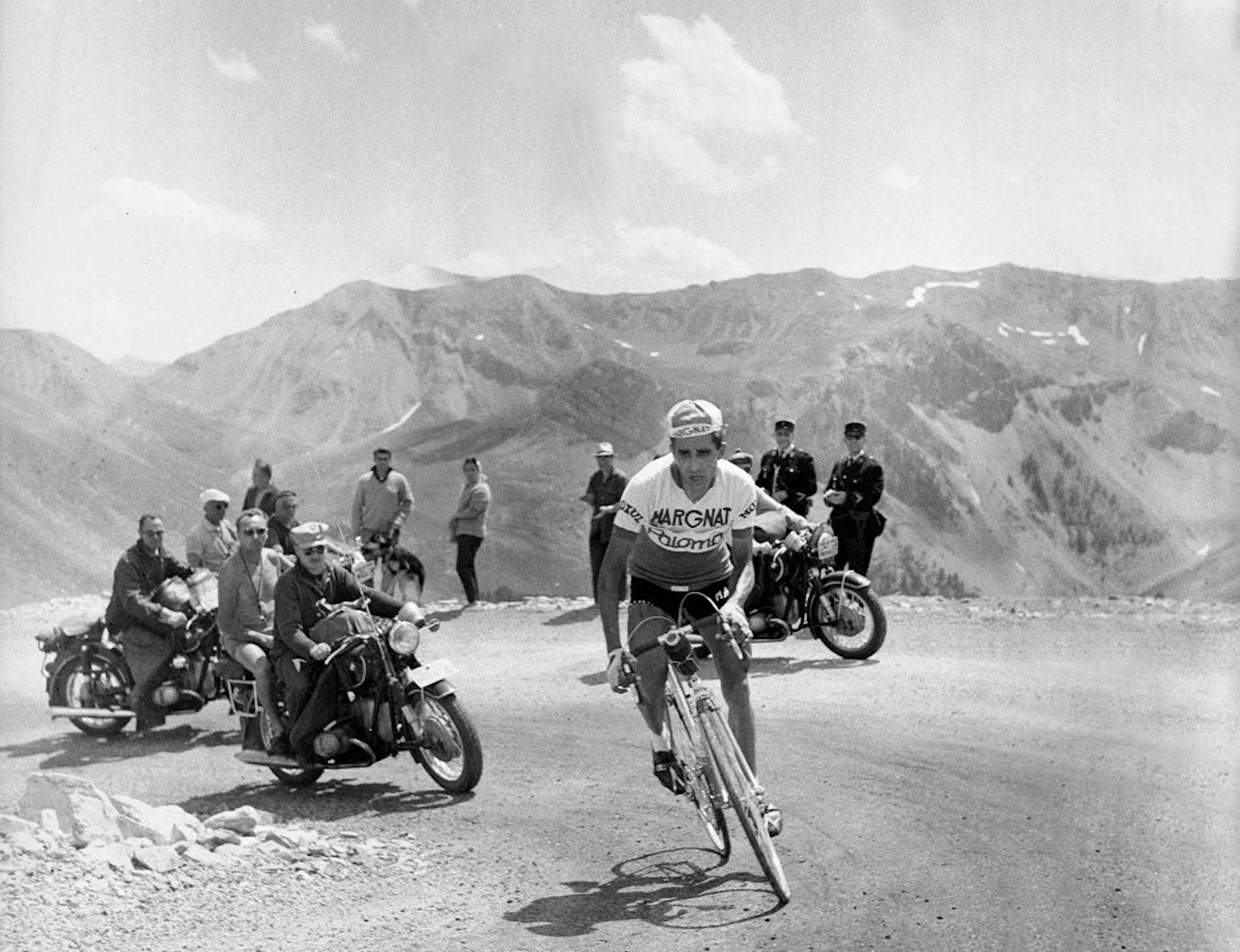 A belated happy birthday to Federico Bahamontes, who was born on July 9, 1928.

Nicknamed the “Eagle of Toledo” for his climbing prowess, Bahamontes was one of the most consistent climbers in the history of the Grand Tours.

Bahamontes’ first and only Grand Tour victory came in 1959, when he won the Tour de France ahead of Henri Anglade and Jacques Anquetil of France.

Previously, the Spanish rider finished second in the 1954 and 1957 Vuelta a Espana, followed by two podium finishes in the 1963 and 1964 Tour de France behind Jacques Anquetil and Raymond Poulidor of France.

In addition, Bahamontes shared the Mountains Jersey title with Charly Gaul of Luxembourg and M. Del Rio of Italy in the 1956 Giro d’Italia.

In the seven French Grand Tours he raced in, Bahamontes won the mountains jersey in all but one.

But, perhaps Bahamontes most memorable moment was when he vanquished his rivals during one of the major climbs in the 1954 Tour de France, and then stopped for ice cream and waited for them to catch up.

Bahamontes’ last podium finish in a Grand Tour event was in the 1964, when he finished third in the Tour de France. He retired the following season at the age of 36.

Bahamontes was born in Santo Domingo-Caudilla, Toledo, Spain. As a result of his family being devastated by the Spanish civil war, his father decided to move the family to Madrid as refugees, who later opened up fruit and vegetable stand.

“My father was neither a red nor a fascist – he simply didn’t like the idea of people coming along and demanding he give away olives, butter and chickens into which he had put too much work, so we left Toledo,” Bahamontes said.

The young Bahamontes began racing in the late 1940s, winning his first race on July 18, 1947, while wearing nothing more than a baseball jersey.

This date would prove to be a portend for Bahamontes, who would go on to win the Tour de France on same day – 12 years later.

Bahamontes rise to prominence came in 1950, when he won the Spanish Amateur National Road Championship, which was followed by victories in the lesser-known races of the Tour d’Ávila and Vuelta a Albacete, over the next two seasons.

After winning his first mountains jersey in the 1953 Tour of Asturias while still a young amateur, the Spanish cycling federation picked Bahamontes to race in the following season’s Tour de France. And, while the 23-year old fledging pro didn’t win the Tour, he did succeed in winning the mountains classification, thus earning the nickname the “Eagle of Toledo” by the cycling press.

From there, Bahamontes went on to win the mountains classification in all three Grand Tours, but an overall victory continued to elude him until 1959.

Bahamontes was not initially considered a favorite to win the overall title in the 1959 Tour de France, but he benefited from an early escape on a stage in the Pyrenees, followed by a mountain time trial to the Puy-de-Dôme.

While in the Alps, he worked closely with fellow climber Charly Gaul to extend his lead into Grenoble. Meanwhile, although French riders Henry Anglade and Jacques Anquetil were successful in cutting their deficits, neither were able to make up enough time to threaten Bahamontes’ overall lead. He won by more than four minutes over Anglade, while claiming the King of the Mountains title as well.

In the aftermath, critics accused Anquetil of conspiring to let Bahamontes win rather than his compatriot Anglade, citing internal rivalries amongst the French delegation.

Bahamontes got no further than the first few stages in next year’s Tour de France, before abandoning due to fatigue. But, he redeemed himself two years later with another King of the Mountains title in 1962.

However, Anquetil would exact his revenge during the next two Tours, relegating Bahamontes to second and third place on the podium.

During the 1963 race, both Bahamontes and Anquetil performed well in the Alpine stages, finishing first and second in one stage just three-seconds apart. But, the Spaniard’s efforts to retain his mountains leadership rebounded on him, as he was unable to break away from Anquetil on the stage to Chamonix.

This combined with a victory in the time trial sealed a fourth Tour de France victory for Anquetil, while Bahamontes finished more than three and a half minutes behind his French rival.

Bahamontes insisted he lost the race because of collusion between Anquetil and the Tour organizer, Jacques Goddet, saying, “they gave him (Anquetil) an extra second at the end of stage 17, where he’d got all the peloton to work for him and a motorbike had given him a hand as well. I had the yellow jersey but there was no point continuing to fight even with just four days to go. There was a time trial the following day, and I knew the whole thing had been set up against me.”

The following year, Anquetil claimed his his fifth Tour de France by a margin of almost five minutes over Bahamontes, while Raymond Poulidor took second place.

However, Bahamontes at least had the satisfaction of winning his sixth King of the Mountains jersey, along with two more stage wins, bringing his total of Tour de France stage victories to seven.

The 1965 Tour marked the end of Bahamontes’ career, which saw the Spanish icon flounder in the mountains, a place where he had once flown.

He finished the stage to Bagnères de Bigorre, at the foot of the Tourmalet, barely inside the time limit.

The next day he tried a colorful attack on the Col du Portet d’Aspet, only to get off his bike and abandon the Tour de France forever.

Bahamontes retired to run a bicycle and motorcycle shop in Toledo, where it’s rumored that he continued to receive letters on a weekly basis for years, some addressed to “F. Bahamontes, Spain” and sometimes to his name and with a picture of an eagle

He is mentioned in the French film Le Fabuleux Déstin d’Amélie Poulain, known in English as Amélie.

In the film, Amélie discovers a hidden box of toys and souvenirs that was left behind by a previous resident. She searches and finds the box’s owner, now a middle-aged man, who is reminded by its trinkets of a time in boyhood when he listened by radio to Bahamontes’ ride to victory in the 1959 Tour de France.

In 2013, which coincided with Bahamontes 85th birthday and the 100th edition of the Tour de France, he was named the best climber in the history of the French Grand Tour by a jury selected by L’ Équipe magazine that included legends such as five-time Tour de France winner Bernard Hinault, as well as the general director of the Tour de France Christian Prudhomme.

The award was presented to Bahamontes by French President François Hollande at the time.