Remembering Tom Simpson After that Fateful Day on Mont Ventoux 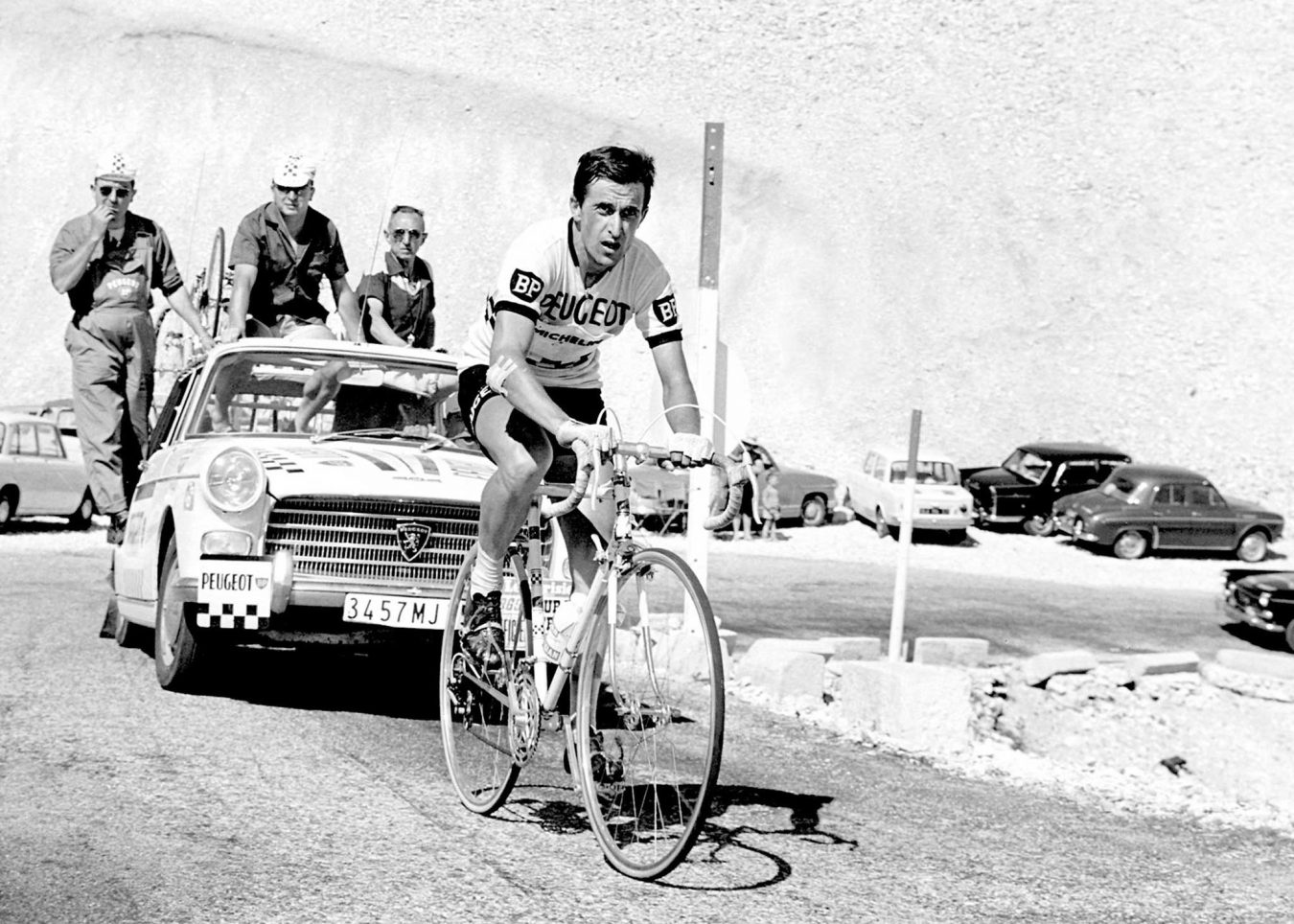 The thirteenth stage of the 1967 Tour de France measured 211.5 km (131.4 mi); it started in Marseille, crossing Mont Ventoux (the “Giant of Provence”) before finishing in Carpentras. At dawn Tour doctor, Pierre Dumas, met journalist, Pierre Chany, near his hotel.

Dumas noted the warm temperature, “If the boys stick their nose in a ‘topette’ [bag of drugs] today, we could have a death on our hands”. At the start line, a journalist noticed Simpson looked tired and asked him if the heat was the problem. Simpson replied, “No, it’s not the heat, it’s the Tour.”

As the race reached the lower slopes of Ventoux, Simpson’s team mechanic Harry Hall, witnessed Simpson, still ill, putting the lid back on his water bottle as he exited a building. Race commissaire (official), Jacques Lohmuller, later confirmed to Hall that he also saw the incident and that Simpson was putting brandy in his bottle. Near the summit of Ventoux, the peloton began to fracture.

Simpson was in the front group before slipping back to a group of chasers about a minute behind. He then began losing control of his bike, zig-zagging across the road.

A kilometer from the summit, Simpson fell off his bike. Team manager Alec Taylor and Hall arrived in the team car to help him. Hall tried to persuade Simpson to stop, saying: “Come on Tom, that’s it, that’s your Tour finished”, but Simpson said he wanted to continue. Taylor said, “If Tom wants to go on, he goes”. Noticing his toe straps were still undone, Simpson said, “Me straps, Harry, me straps!”

They got him on his bike and pushed him off. Simpson’s last words, as remembered by Hall, were “On, on, on.” Hall estimated Simpson rode a further 500 yards before he began to wobble, and was held upright by spectators; he was unconscious, with his hands locked on the handlebars. Hall and a nurse from the Tour’s medical team took turns giving Simpson mouth-to-mouth resuscitation, before Dumas arrived with an oxygen mask.

Approximately forty minutes after his collapse, a police helicopter took Simpson to nearby Avignon hospital, where he was pronounced dead at 5:40 p.m. Two empty tubes and a half-full one of amphetamines, one of which was labelled “Tonedron”, were found in the rear pocket of his jersey The official cause of death was “heart failure caused by exhaustion.

On the next racing day, the other riders were reluctant to continue racing and asked the organizers for a postponement. France’s Stablinski suggested that the race continue, with a British rider, whose team would wear black armbands, allowed to win the stage. Hoban won the stage, although many thought the stage winner should have been Denson, Simpson’s close friend. Media reports suggested that his death was caused by heat exhaustion, until, on 31 July 1967 British journalist J. L. Manning of the Daily Mail broke the news about a formal connection between drugs and Simpson’s death.

French authorities confirmed that Simpson had traces of amphetamine in his body, impairing his judgement and allowing him to push himself beyond his limits. His death contributed to the introduction of mandatory testing for performance-enhancing drugs in cycling, leading to tests in 1968 at the Giro d’Italia, Tour de France and Summer Olympics. Simpson was buried in Harworth Cemetery, after a service at the 12th-century village church attended by an estimated 5,000 mourners, including Peugeot teammate Eddy Merckx, the only continental rider in attendance.

The epitaph on Simpson’s gravestone in Harworth cemetery reads, “His body ached, his legs grew tired, but still he would not give in”, taken from a card left by his brother, Harry, following his death.