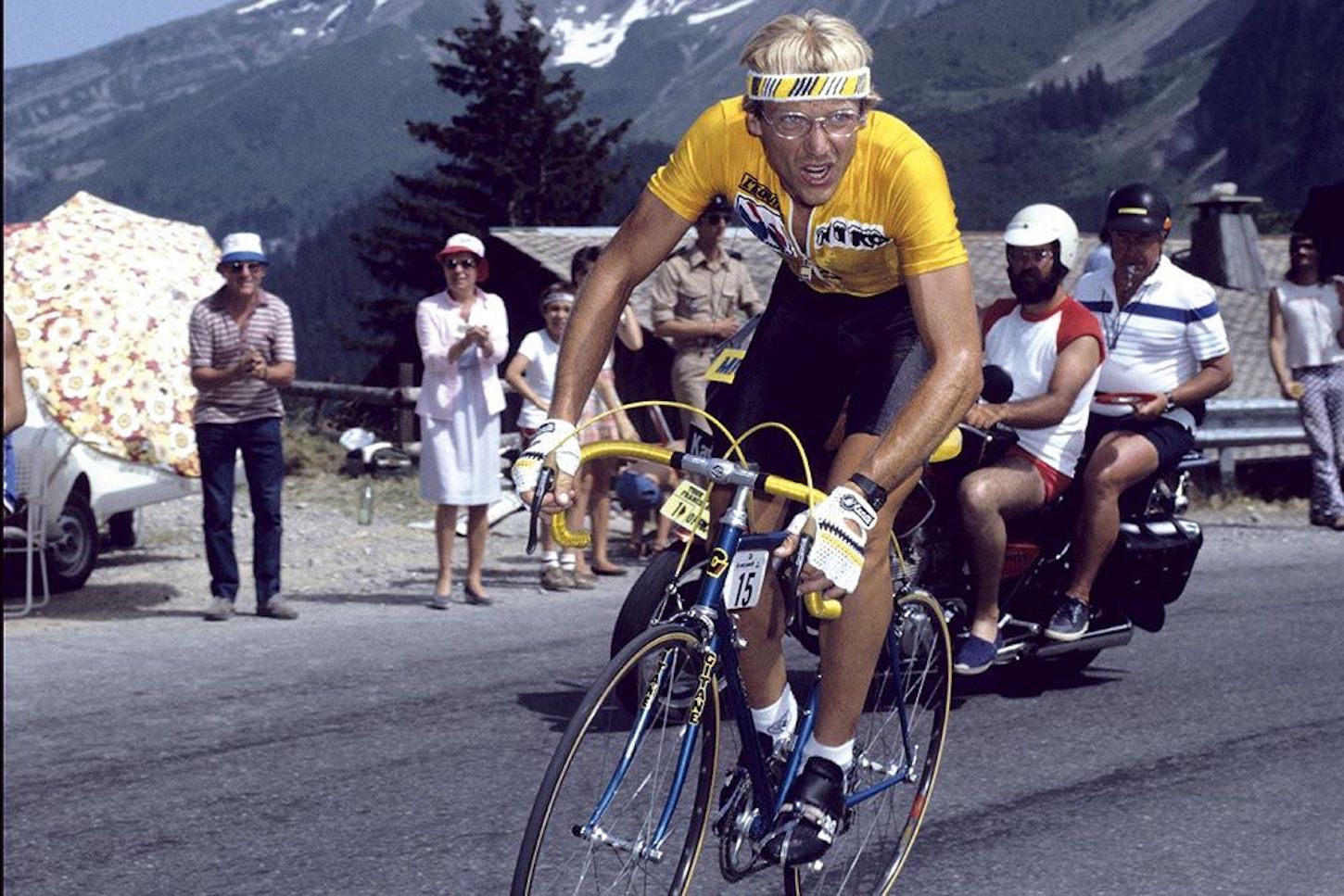 The French rider is best remembered for his Grand Tour triumphs, winning the Tour de France in 1983 and 1984, along with the Giro d’Italia in 1989.

Fignon was born in Montmartre, Paris. His family later moved to Tournan-en-Brie in 1963, where he lived until he left for Paris at a later age.

While his first interest in sports lied in soccer, the young Laurent was later introduced to cycling by his friends.

Without his parents consent, Fignon entered and won his first official amateur race in 1976. This led to four more victories that same year.

It wasn’t until his third year of racing that his parents embraced his decision to race full-time, after the fledgling pro won 18 out of the 36 races he entered.

Still, Fignon’s parents insisted that he continue his education, seeing to it that he enrolled at the University of Villetaneuse to study Structural and Materials Science.

However, Fignon found it nearly impossible to focus on his studies, with his only desire being cycling. As a result, he left the university and later joined the army to fulfill his military service.

Fignon was posted at the Bataillon de Joinville, which was known for its sporting reputation. This only served to further bolster his desire to become a professional cyclist.

Fignon rode his first professional race in 1981, the Tour of Corsica, which allowed amateur cyclists to ride alongside professionals.

Early on in the race, the ambitious Fignon made a bold attempt to hold onto the wheel of none other than Bernard Hinault, which he succeeded in doing so for most of the race.

This caught the attention of one of cycling’s foremost team directors, Cyrille Guimard, who later offered him a spot on his Renault-Elf-Gitane team for the next season to ride in support of its captain, Hinault.

Fignon’s entrance into the pro peloton came by way of the Giro d’Italia, wherein the young neo-pro earned himself the coveted maglia rosa (pink jersey) for a day, following a heroic breakaway effort during the second stage.

He lost the jersey the following day, but this earned him the trust of Hinault, who came to rely on the young Frenchman’s support in the mountain stages.

Fignon later claimed his first professional victory that season, after winning the Critérium International. But, the following season would prove to be the most pivotal in his career.

Guimard initially didn’t want to send Fignon to the Tour de France, because two Grand Tours might prove to be too much for a 22-year-old rider.

However, when Hinault announced that he would not be defending his Tour de France title due to injury, this left the Renault team without a leader. Therefore, Guimard had no choice but to add Fignon to the team’s selection, hoping that he might win a stage or even compete for the best “debutant category”.

Yet, Fignon surpassed everyone’s expectation, when after the first mountain stage he moved up into second place in the overall classification behind Pascal Simon.

On the tenth stage, Simon crashed badly and broke his shoulder. And, despite fiercely defending his maillot jaune (yellow jersey) during the next few stages, Simon continued to lose time to his young French rival.

Alas for Simon, Fignon was able to gain so much time during the stage 15 mountain time trial, he was within one minute of the leader.

On the seventeenth stage, Simon essentially gave up, allowing Fignon to take over as the race’s new leader.

From there, Fignon went on to thwart any challenges from his opponents and win the Tour de France, making him the youngest rider to claim victory in the French Grand Tour since 1933.

In 1984, Hinault moved to the new La Vie Claire team, established by the French entrepreneur Bernard Tapie and directed by Swiss coach Paul Koechli, while Fignon stayed with the Renault team and became its new team leader.

During the 1984 Giro d’Italia, Fignon was in the lead near the end of the race, with Italian Francesco Moser in second place. The highest mountain stage, where Fignon could have extended his lead as the better climber, was cancelled by race organizers “due to bad weather”.

In one of the more outrageous actions ever seen in a major race, camera helicopters were allowed to fly close to the riders during the final time trial.

In the case of Fignon, a helicopter was allowed to fly in front of him, seemingly creating a headwind, while it auspiciously hovered behind Moser as to create a tailwind. And, despite Fignon repeatedly shaking his fists at the obstructing aircraft, they refused to move off.

Moser ended up gaining enough time to take the overall race lead, with Fignon being moved back to second place. He later said the experience made him tougher, and prepared him for the hardships to come.

The 1984 Tour de France would mark an epic battle between Fignon and his former team leader, Hinault.

Hinault won the prologue, but Fignon won back time when his team won the time trial event during stage three.

After a heroic escape during the fifth stage, Fignon’s teammate Vincent Barteau was leading the race.

Fignon later won the stage 7 time trial, beating Hinault by 49 seconds, while Barteau continued to lead the race until the Pyrenées.

Fignon again vanquished Hinault during the stage 16 time trial, this time by more than half a minute.

During the seventeenth stage, Hinault attacked no fewer than five times along the penultimate climb, but a vigilant Fignon was able to mark his rival’s every move.

The battle between the two riders reached its apex when Fignon later commenced an attack of his own toward the end of the climb, distancing Hinault, who finished almost three minutes back.

In the meantime, Barteau was so far behind during the stage, that Fignon was thrust into the race lead.

Fignon went on to win three more stages and the overall victory by a staggering ten minutes over Hinault.

With his air of indifference during interviews and his crushing dominance, the once understudy was hailed as France’s newest superstar.

Despite coming into the 1985 season feeling stronger than ever, a knee injury forced Fignon to miss that year’s Tour de France.

The following season Fignon’s team took on a new sponsor and became the Système U team, which saw victory for him in the La Flèche Wallonne Classic. But, a poor showing in that year’s Tour saw him abandon after stage 12.

Fignon returned to near full strength in 1987, finishing third in that season’s Vuelta a España behind Luis Herrera.

Later that year, he finished 7th overall in the Tour de France, taking another victory at La Plagne.

In 1988, Fignon won his first Milan–San Remo Classic, but again was forced to abandon the Tour de France.

1989 proved to be a more fruitful season for Fignon, wherein he surpassed Sean Kelly in leading UCI Road World Rankings, which included victories in the Milan–San Remo Classic again and the Giro d’Italia.

After Delgado was inexplicably late for the start of the opening prologue by almost three minutes, this left the race wide-open to all contenders.

Greg LeMond ultimately won the prologue by one minute, during which time the American rider debuted the use of aerobars, a new type of teardrop-shaped aerodynamic helmet and a rear disc wheel, while Fignon relied upon a more traditional set-up.

LeMond led the general classification after that stage by 5 seconds. But, Fignon later beat LeMond by 12 seconds during stage 10, becoming the new leader by 7-seconds.

However, LeMond reclaimed the lead after winning the stage 15 time trial.

A defiant Fignon came back to regain the lead again, after distancing LeMond on the climb of Alpe d’Huez, followed by another mountain stage victory to Villard-de-Lans the next day. As a result, he led his American rival by 50 seconds heading into the final time trial.

To win, LeMond would have to reduce his deficit by two-seconds for every kilometer against one of the Tour’s fastest time trialists.

In view of this unlikely feat, not surprisingly, French newspapers prepared special editions heralding Fignon’s victory ahead of the final stage.

Meanwhile, Fignon had been battling with saddle sores, which were said to have caused him so much pain that he was unable to sleep the night before the time trial.

In the end, Fignon lost 58 seconds during the stage, ultimately finishing third in the “race against the clock”, and surrendering the overall lead to LeMond by a mere 8-seconds.

After the race, critics famously suggested that if Fignon had cut off his ponytail, the reduction in drag might have been sufficient for him to have won the Tour.

To make matters worse for Fignon, he had been on bad terms with the journalists throughout most of the race, often refusing to smile for photographs, and at one point is alleged to have spat on the lens of a cameraman who asked for an interview.

For his behavior, the press awarded him the “Prix Citron”, a prize that is given to the rider whom they feel was the least likable.

The loss of the 1989 Tour was a heavy burden for Fignon, who said in his autobiography “you never stop grieving over an event like that.”

Fignon withdrew from the 1990 Tour, which was followed up by a dismal 6th place finish the following year.

The next season, he moved over to the Italian Gatorade team to act as co-captain and advisor to promising young talent Gianni Bugno.

After a dramatic 1992 Giro d’Italia, in which he was in heavy crisis during mountain stages, Fignon rode his last Tour de France that season as well, finishing a disappointing 23rd overall.

Fignon’s last victory as professional cyclist was the early-season Ruta Mexico in 1993, after a tight duel with Francisco Villalobos and surviving a massive collision that saw the peloton struck by a  truck that was driven by a man who was determined to be intoxicated.

In 1995, Fignon founded the “Laurent Fignon Organization”, a business set-up to organize races like Paris-Nice and Paris–Corrèze.

His organization oversaw Paris–Nice from 2000 until it was taken over by Amaury Sport Organization (ASO), but remained in control of the Paris–Corrèze race.

In 2009, Fignon released his autobiography titled Nous étions jeunes et insouciants (“We were young and carefree”).

Later that year, he revealed that he was undergoing chemotherapy for metastatic cancer.

In January 2010, his doctors discovered that the cancer had spread to his lungs.

His funeral took place on September 3, 2010 at Père Lachaise Cemetery, where he was later cremated.

Greg LeMond said at the time of his death,”it’s a really sad day. He had a very, very big talent, much more than anyone recognized. We were teammates, competitors, but also friends. He was a great person, one of the few that I find was really true to himself. He was one of the few riders who I really admired for his honesty and his frankness. We talked about a lot of different things outside of cycling and I was fortunate to really get to know him when my career stopped. I believe he was also one of the generation that was cut short in the early nineties because he was not able to fulfill the rest of his career. But he was a great rider.”