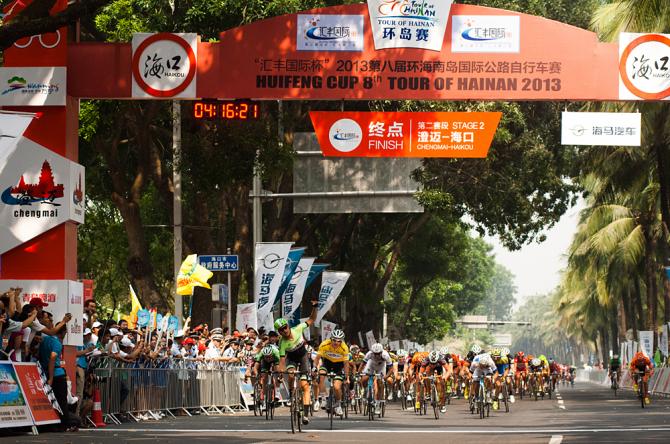 Theo Bos repeated his stage 2 victory from yesterday by winning stage 3 of the 2013 Tour of Hainan today. As well, Moreno Hofland repeated his second place finish fro yesterday in front of  Yuriy Metlushenko – who finished third.

“It’s been a similar race as yesterday”, Bos described. “A breakaway went but not very early and only one of our guys, Marc Goos, was able to set the pace of the bunch and chase by himself.”

At one point, Vasylyuk rode clear of the group – opening up a gap of 1:30 in the final 15 kilometers. The Ukrainian rider managed to stay out front until the last intermediate sprint point – located 8 kilometers from the finish. In second place was Anuar Manan – who took the time bonus he needed to reclaim the lead in the Asian riders classification.

“But a stage win at the Tour of Hainan is my goal more than the blue jersey, which is hard to keep for a sprinter although the profile is not so bad this year”, Manan said. “I’ve won a stage at this race in 2008 and 2011, last year I got a second place. This year, there are a lot of strong sprinters but I think I can still win. I believe in myself and I believe in my team-mates.”

“Some other teams were looking for time bonus at the end, so the last 20km went pretty fast”, Bos explained. “But we managed to hit the front and put our train in place. Lars Boom capped it off and gave me the way really close to the finish. He made it easy for us. We could repeat the same tactic with Moreno following me.”

“If possible, one day I’ll try to pass Theo”, echoed the race leader with a smile. “But when he sprints over 50km/h, he’s hard to beat. Only if a finish is uphill, we can go for a different result. For now, we’re gonna keep the same tactic. I’m confident I can keep the yellow jersey in the hills because I could climb well at the Tour of Beijing.”

Since switching his discipline from "track" to "road" after the Beijing Olympics, Bos has had the goal  to win one race every year. At Le Tour de Langkawi in February this year, he said he was unsure of his target after he exceeded his expected score in 2012 with seven victories. Winning stage 2 of this year’s Tour of Hainan marked his eight win of the 2013 season.

“It’s nice to break a record”, Bos concluded. “But maybe I should stop it there, otherwise I won’t know what to do next year. Anyway, we’ll try to get the most of this race as a team with winning more sprints and GC.”