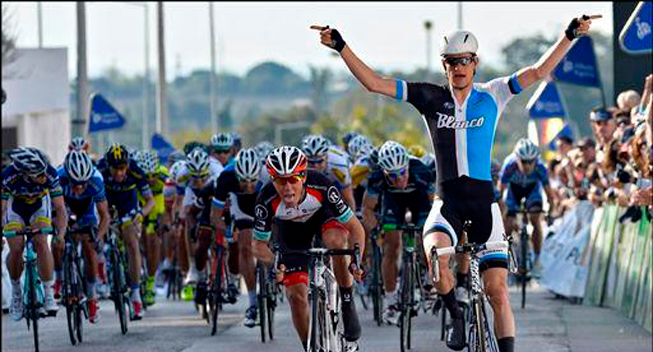 Following his third consecutive win on yesterday’s stage, Theo Bos expressed concern over his ability to survive the climbing on today’s fifth stage of the Tour of Hainan but not even the hills on the Chinese province was enough to stop the sprinter for adding another win to his tally. For the fourth day in a row, Bos emerged as the strongest in the bunch sprint that decided the stage.

However, the win was a hard-fought one as Bos had actually lost contact with the peloton on the final climb and only hard work by his teammate Marc Goos allowed him to return to the main group in time for the final sprint. As soon as he had regained contract, Belkin assumed their usual position on the front of the peloton and won the battle with Ukraine for control before delivering Bos to his fourth and Belkin’s fifth win in the race.

Having been blocked in yesterday’s sprint, overall leader Moreno Hofland was back in his usual position on Bos’ wheel and kept it all the way to the line to take his third 2nd place behind his teammate. As he also picked up bonus seconds in the intermediate sprints, he extended his lead over 2nd placed Frederic Amorison to 43 seconds.

Hofland faces his most difficult task yet in tomorrow’s short 115,6km 6th stage which contains two category 2 climbs. The final of those comes less than 20km from the finish and is likely to create a bigger selection than we have seen in the race so far.

The 187,1km 5th stage was the hilliest of the race so far as it contained two category 2 climbs along the otherwise mostly flat route. There was, however, time for the sprinters to get back in contention as the final ascent was located more than 50km from the finish.

As it had been the case on the previous stages, the race was off to a fast start and it took some time for the early break to be established. At the first intermediate sprint, the peloton was still together and so the GC riders could sprint for the bonus seconds. Hofland showed his speed by beating Fabian Schnaidt (Champion System) and his 3rd place teammate Tom Leezer to add another 3 bonus seconds to his tally.

A break still hasn’t gone clear by the time, the peloton reached the day’s first climb where KOM leader Vitaliy Buts (Ukraine) finished 2nd behind Michael Gogl (KTM). After the top, the elastic finally snapped when Floris Goesinnen (Drapac) and Lukas Ranacer (KTM) surged clear and were allowed to build up a gap of 3.25.

The duo picked up maximum points in the final two intermediate sprints while best Asian rider Yilin Liu (Hengxiang) and Hofland picked up the final bonus seconds. Meanwhile, Belkin had started to chase and the gap was now coming down.

On the final climb of the day, Goesinnen beat Ranacher while Mateusz Taciak (CCC) crossed the line in 3rd ahead of Buts who defended his mountains jersey. The fast pace saw Bos lose contact with the peloton and the Belkin sprinter was now left with teammate Goos as he tried to get back on.

Finally, he succeeded in his mission while the front duo was caught with 25km to go. Once again all was set for a big bunch sprint and Belkin and Ukraine were battling hard for control on the front of the peloton. The Dutch team won the battle and once again delivered their sprinter to a win while Hofland stayed well-positioned to score another 6 bonus seconds by finishing 2nd.