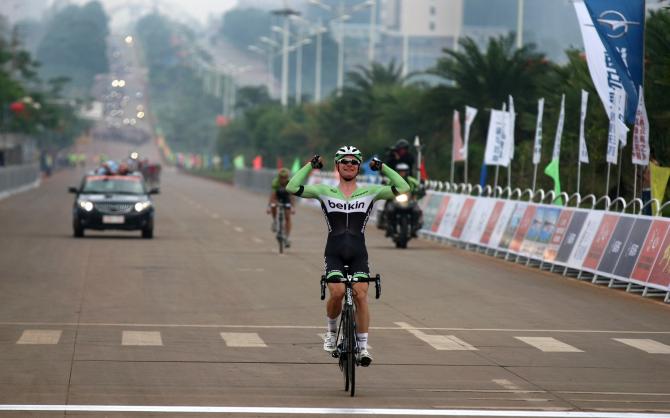 Team Belkin continues to dominant this year’s 2013 Tour of Hainan – with Moreno Holfland winning stage 6 in an uphill finish against teammate Lars Boom today. Today’s victory not only gave the Dutch rider his second win in this year’s race, but it extended his overall lead by almost a minute over  Frederic Amorison.

Given Belkin’s sprinting prowess, rivals were hopefully that today’s 15 kilometer climb might have leveled the playing field. And, while it may have sapped Theo Bos of any chance of winning, Moreno and Boom were successful in staying up front.

Once again the team took control in the final kilometers and race leader Hofland proved that he is a very fast sprinter in his own right. Having had to settle for 2nd behind Bos on three stages so far, he finally got the chance to sprint for the win and he paid back his teammates’ hard work with his second win in the race and his second win since turning professional at the start of the year. Teammate Boom was the final rider to lead him out and the classics specialist held on to take 2nd, thus adding to his string of results that already include two 4th places on stages 2 and 3.

With the win Hofland extends his overall lead over Frederic Amorison to 53 seconds with just three stages remaining. The first of those comes tomorrow, is 217,2km long and contains the only category 1 climb already at the 9,6km mark. After a short descent, the roads are, however, completely flat and another bunch sprint could be on the cards in Hainan.

Today’s stage was a relatively short one at 115,6 kilometers. However, it was considered the most difficult in view of the two challenging category 2 climbs.

Due to the short length, the stage was raced at a very fast pace and numerous attacks were launched in the first part of the stage. However, Belkin was also on top of things and made sure that no dangerous move got too much of a gap.

At one point, Marek Rutkiewicz (CCC) and Clement Saint-Martin (La Pomme Marseille) opened up an advantage, but Belkin kept the pace high throughout the entire stage. Even before they reached top of the first climb at the 60,2km mark, the break was swallowed up by the bunch which allowed Mateusz Taciak (CCC) to beat Volodymyr Zagorodnyi (Ukraine), Nikolay Mihaylov (CCC) and Michael Gogl (KTM) in the battle for the points. In the first intermediate sprint, Maksym Averin (Ukraine) beat teammate Mykhailo Kononenko and Jose Goncalves (La Pomme Marseille) and Goncalves continued his success when he won the second intermediate sprint a little later. Pengda Jiao (Champion System) finished 2nd ahead of Kanstantsin Klimiankou (Atlas) to get closer to Liu Yilin (Hengxiang) in the Asian riders’ competiton.

On the final climb, several attacks were launched and the fierce pace was too much for Bos who was one of the riders to get dropped. His teammate Dennis Van Winder tried to pace him back but the fast Dutchman never rejoined the peloton.

David Belda (Burgos), Chris Butler (Champin System) and Klimiankou were the first riders across the line at the top while Gogl beat KOM leader Vitaliy Buts (Ukraine) in the battle for fourth to get closer to the lead in the mountains competition. However, no one managed to escape and so all was once again set for a sprint decision. Hofland was perfectly delivered to the line by Boom and took his second win of his professional career to extend his overall lead.