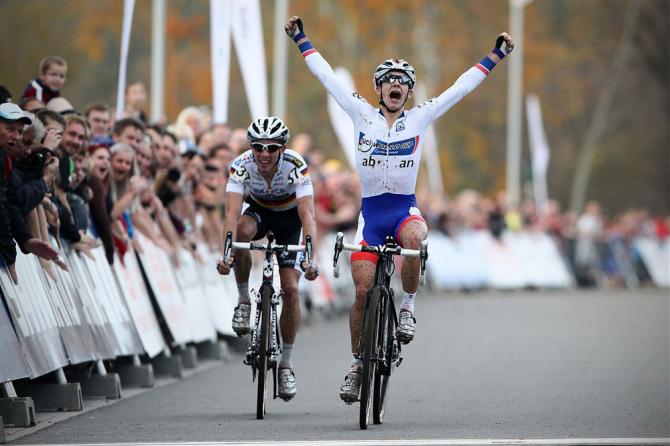 "I thought Sunday was the best day of my life but today I again felt really good and we could stay away," said Van der Haar. "I’ve never sprinted against Philipp and he has won sprints on the road but I knew if I could come out of the corner correctly I had a really good shot at winning. But you never know against such a strong rider like Philipp, but now I know."

Van der Haar and Walsleben rode away from their rivals on the second lap of today’s 9 lap circuit. At one point, the duo had opened up a gap of 34 seconds over the field. However, today’s victory for the Dutch rider did not come without it’s problems. Vam der Haar crashed on a downhill during the fourth lap – as a result of being distracted by a mechanical problem. Maintaining his cool, he was able to extract his bicycle from the mesh fencing and regain contact with Walsleben by the fifth lap.

"I had a problem with my derailleur," said Van der Haar. "The cable was loose, I looked at it but I forgot to turn so I crashed."

World champion Sven Nys also crashed on the second lap as well. However, unlike Van der Haar, the Belgian cross-star never rebounded – finishing as far back as 22nd place at 2:28 behind.

"It was crazy hard – I knew Philipp was really, really good," said Van der Haar of his pursuit of Walsleben. "I knew if I kept the gas full-open I’d have a chance of coming back because he was tired as well. I had no other option – I had to try."

Mourey attacked his Belgian compatriots – distancing himself from them on the sixth lap – and reducing the gap between Van der Haar and Walsleben to just 14 seconds.

However, the French Champion was soon met with a mechanical failure early in the seventh lap – that saw the three Belgians stormed past him – as he fell trying to remount. Mourey did manage to regain contact though.

The quartet was soon joined by Bina, Aernouts and Van Kessel to form a seven-man chase group. However, by the end of the lap, the group still trailed the leaders by 34 seconds.

Mourey attempted another surge on the penultimate lap – successfully breaking up the chase group. Vantornout was able to keep pace with the Frenchman while Pauwels and Bina chased just seconds back. Pauwels eventually bridge himself across to Mourey and Vantornout.

Near the end of the lap, Van der Haar initiated a strong attack as Walsleben went into the second pit for a new bike. But, by the time the Dutchman reached the final stretch – the German champion had regained contact with him.

For most of the final lap Van der Haar shadowed Walsleben. And, as their pace slackened, it appeared as though the Mourey-led chase was going to make contact. However, the lead duo increased their pace – maintaining enough impetus to hold off the pursuit.

Walsleben led Van der Haar onto the asphalt for the finishing sprint, but the powerful Dutch rider proved to be too strong as he came around the German in the final meters of the race.

Meanwhile, Mourey attacked yet again on the final lap with only Pauwels able to respond. The two remained together until the final asphalt approach – where Pauwels surged – thus creating enough of a gap to hold off Mourey.