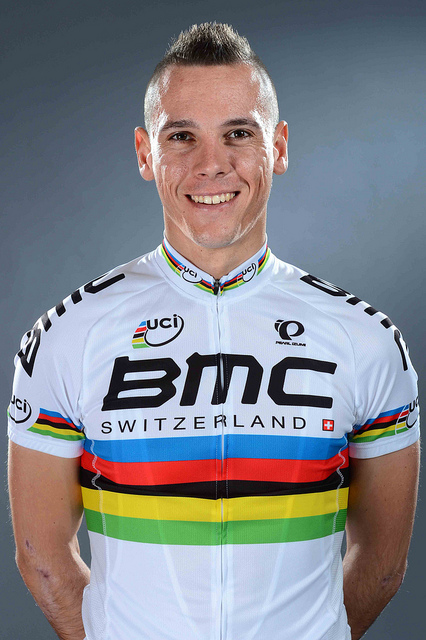 Philippe Gilbert succeeded in riding clear after the final climb of this year’s Amstel Gold Race to claim solo victory in today’s race.

Just as the peloton finally managed to reel in what remained of a small breakaway group on the final ascent of the Cauberg, Gilbert surged – subsequently opening up a slight advantage of a few bike lengths. And, despite the best efforts of a pursuit that was led by Michal Kwiatkowski, there was no retrieving the Belgian rider who crossed the line in a solo victory.

Today’s 252 kilometer race from Maastricht – Valkenburg claimed a host of victims; namely Joaquim Rodriguez, Andy Schleck and Geraint Thomas who were among those forced to abandon as a result of crashes.

At one point, Thomas Voeckler initiated an attack from within the ranks of the chase in an attempt to bridge himself to the leaders. In turn, the French rider was quickly followed by Zdenek Stybar, Greg Van Avermaet, Tim Wellens, Pieter Weening, Jakob Fuglsang, Alexandr Kolobnev, Bjorn Leukemans and Paul Martens.

Up front, Boem lost contact with this companions on the climb of the Keutenberg, leaving Van Hecke and Riblon alone out front.

With 24 kilometers remaing, the lead duo was still clinging to a 90 second lead, as they crossed the finish line for the first time during the final circuit.

In the meantime, Voeckler’s chase group had dwindled down considerably – with only a 24 second lead over the main field.

With 15 kilometers remaining, the leader’s gap had been reduced to just 40 seconds of over Voeckler’s, with a looming peloton just behind them.

As the race entered into the final 11 kilometers, with the exception of Van Avermaet and Fuglsang, all of the Voeckler group had been absorbed by the peloton, with the remaining leaders just seconds ahead of the pursuit.

Back in the main field, Garmin took up the pace setting as the race approached the penultimate climb of the Bernelerberg. It was then, that Giampaolo Caruso managed to ride clear of the chase group and latch onto the leaders.

In response, Van Avermaet initiated a counter attack of his own. However, the Belgian rider got nowhere. And, shortly thereafter, all of the remaining leaders were reeled in by the peloton, as the race headed into the final 7 kilometers in what was shaping up to be a bunch sprint finale.

From there, Orica-GreenEdge came to the front to take up the pace setting on the final ascent of the Cauberg. And, as teams were jostling for position along the descent, Gilbert suddenly surged from within the group.

As the Belgian rider crossed under the final kilometer banner, Simon Gerrans, Alejandro Valverde and Kwiatkowski pursued in earnest. However, the trio proved to be no match for Gilbert, who proceeded to cross the finish line in a solo victory.