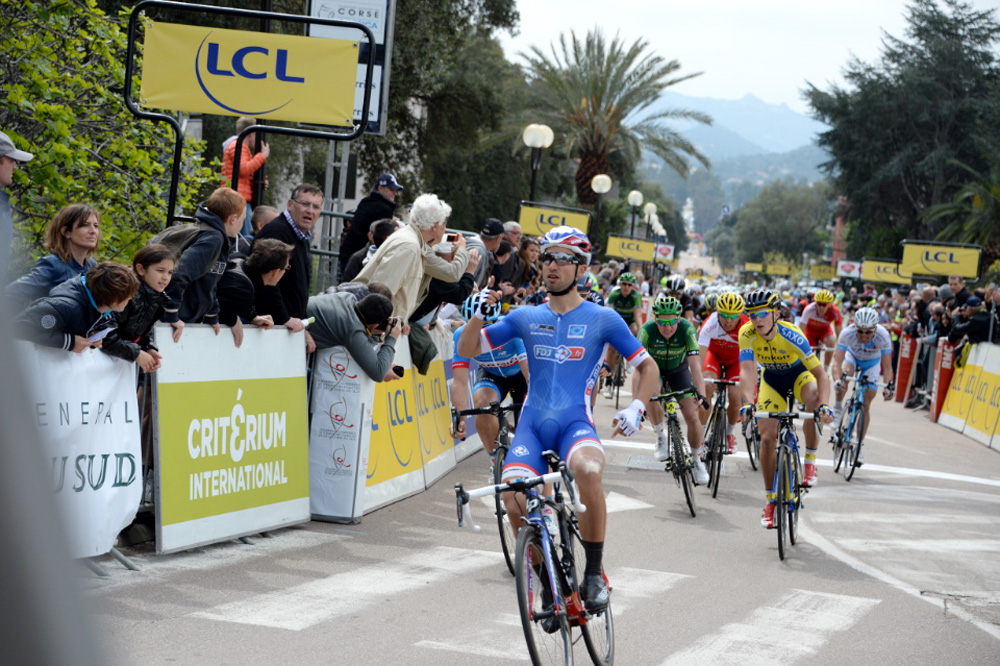 Nacer Bouhanni won the opening stage of this year’s Critérium International, capturing victory this morning around the city of Porto Vecchio. The FDJ.fr rider beat Nathan Haas and Marko Kump in a sprint finish to claim both the stage victory and the overall leader’s Jersey.

Today’s 83rd edition of the 2104 Critérium International, got underway with 113 riders setting out on the 89 kilometer course around the Island of Corsica. And, within the first kilometer, a breakaway group containing  Gougeard (ALM), Venturini (COF), Vaubourzeix (LPM) and Vimpère (BIG) succeeded in escaping the peloton – subsequently building up a gap of two minutes in the first 25 kilometers of racing.

As the race reached the first and only climb of the day, day, the Côte de Conca at the 46.5 kilometer mark, Vimpère proceeded to capture all of the "climber’s" points ahead of Gougeard and Vaubourzeix. However, a mere kilometer and a half later, the escapees were caught. From there, the  AG2R-La Mondiale team took control of the pace setting, wherein the peloton splintered into two groups, with some 50 riders including Andy Schleck and Janez Brajkovic momentarily being left behind. However, with 20 kilometers remaining, the field came back together again.

The only intermediate sprint of the day occurred at the 73.5 kilometer mark, with Brandle claiming the points over Jungels  and Rossetto. With 15 kilometers remaining, Vanotti attempted to ride clear on his own. And, with 10 kilometers to go, the Italian rider enjoyed a a climb10 seconds lead over the field, before caught in the final 2 kilometers.

At that point, the peloton began preparing for a bunch sprint finale, where Nacer Bouhanni made his way to the fore, to easily  beat Haas and Kump to the line.