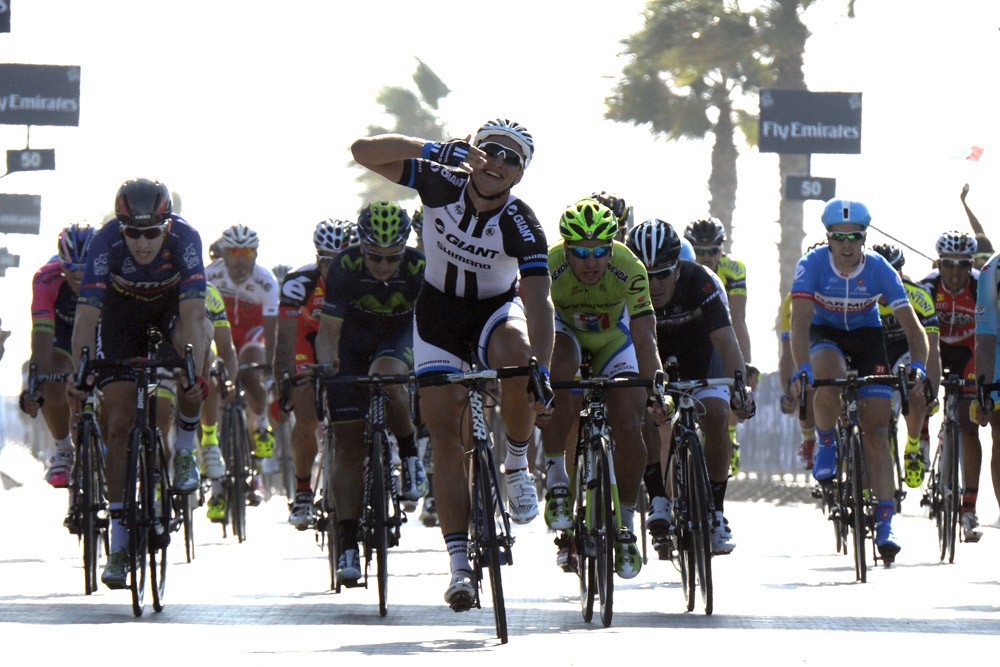 Kittel executed a perfectly timed sprint – as the German rider edged out Juan Jose Lobato and Peter Sagan on the finish line in Hatta.

Today’s 162 kilometer route featured two climbs towards the end of the stage – which were designed to balance out the course and not necessarily favor the sprinters.

Indeed, today’s race saw Kittel hold on in earnest, as the attacks came down on the final two climbs of the stage – ultimately shedding most of the sprinters. However, despite losing most of his "lead-out" men, Kittel demonstrated he can win on sheer will.

“It was really hard. I had enough power to pass the climbs but if it was one more kilometre then I would have been dropped. I knew the final and I knew my chances were 50-50 but I’m very happy to have made it,” the German said at the finish.

“The team tried to help me as much as possible and we had to go for ourselves and see who was left. It was more difficult without the train."

By mid-point in the race, the escapees had established a healthy lead over the peloton – which forced race leader Taylor Phinney and his BMC team to deploy riders to the front.

With 38 kilometers to go, BMC appeared to have the situation under control – as they had reduced the breakaway group’s gap down to 2:38.

Shortly thereafter, the breakaway group began to splinter, with Karimov, along with Nunes and Pereira being dropped – leaving just Smit, Huffman and Pliuschin out front with 34 kilometers remaining.

With the remaining escapees in sight, the Trek Factory team moved up front to assist BMC with the chase.

At the 16 kilometer mark, the escapees fractionalized again – leaving Pliuschin out front alone with just a 1:58 lead over the field.

At that point, BMC’s Max Sciandri decided to put the hammer down – ushering his teammates to up the tempo for one final assault. Indeed, their efforts instantly reduced Pliuschin’s lead by 20 seconds.

Up ahead, Pliuschin was met by the first of two climbs. And, as the Moldovan rider struggled to stay away –  his lead began to dwindle rapidly.

Back in the main field, team Movistar began making it’s way to the front – with Adriani Malori briefly riding clear.

Team Cannondale countered, and under the impetus of Damiano Caruso and Marco Marcato – they managed to reel in both Malori and Pliuschin with 7.4 kilometers remaining. Behind them sat Cummings and Phinney, with Sagan and Rui Costa also onboard.

On the descent, Tony Martin initiated a brief attack. However, this merely proved to be a launch pad for Alejandro Valverde – who managed to ride clear.

Back in the main field, things came together again – with 40 riders – including Cavendish, Kittel and Sagan at the front.

Rui Costa was the first to attempt an attack. However, the Portuguese rider was reeled back in during the final 1000 meters.

In the closing few hundred meters, Sagan looked poised for victory. However, too much jockeying caused the Slovak rider to find himself in a poor position, as Kittle once again powered his way through.