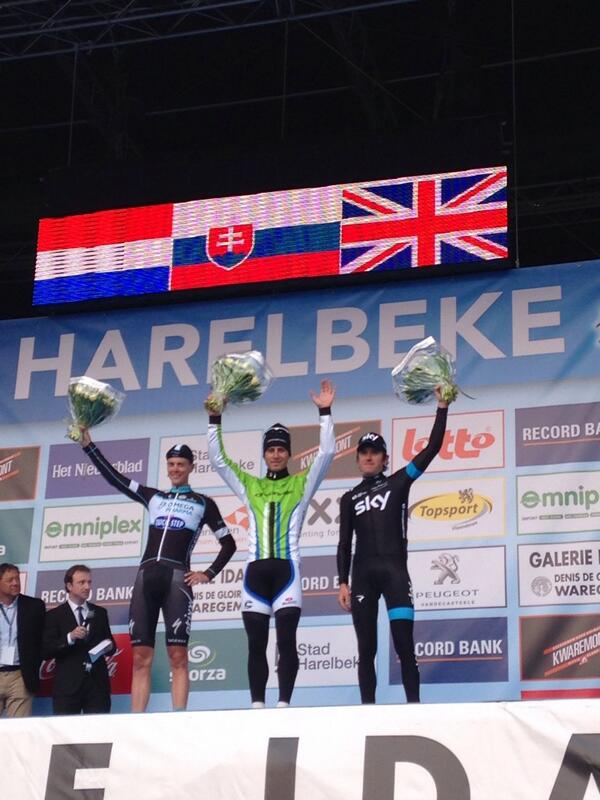 After steadily working in unison, the breakaway group succeeded in gaining a seven minute lead over the peloton. However, as the race turned toward the first of many climbs to come, their advantage began to steadily diminish.

Shortly thereafter, tragedy struck the peloton, wherein several riders were taken taken down during a crash; most notably Svein Tuft of the Orica – GreenEdge team, who was forced to abandoned the race. A subsequent crash took place on the cobbles of the Varent just before the climb of the Boigneberg, that ensnared Team Sky’s Ian Stannard after he struck a stationary rider who was blocking the route.

From there, the peloton held tight for the next 30 kilometers, as the race traversed the Taaienberg, Knokteberg, Hotondberg, Rotelenberg and Kortekeer.

At the 45 kilometer mark, a crash once again took place, where Michel Kreder proceeded to take out three Topsport Vlaanderen – Baloise riders with him.

As the race approached the the climb of the Kapelberg, the escapees still held 1:30 advantage over the peloton. However, yet another crash plagued the peloton, subsequently scattering the field and distancing race favorite Fabian Cancellara.

On the ascent of the Paterberg and the Oude Kwaremont, the race "blew" apart, with Sep Vanmarcke and Geraint Thomas being the first two riders over the climbs. Meanwhile, Cancellara continued to make his way up through the field, along with Stijn Devolder in support.

As the race exited the Oude Kwaremont and headed to the newly featured climb of the Karnemelkbeekstraat, the field was comprised of an eight-man lead group that held a slight gap of 15 seconds over a fourteen-man pursuit.

On the Karnemelkbeekstraat, Sagan initiated a surge, with only Thomas, Terpstra and Vandenbergh able to respond. From there, four leaders quickly opened up a gap of almost half a minute over the pursuit containing Cancellara, Devolder, Boonen, Degenkolb, Devenyns, Stybar, Bozic, Roelandts, Boasson Hagen, Bozic, Konvalovas, Vanmarcke, Cousin and De Vreese, as the race headed into the final 20 kilometers.

As the race approached the cobbles of the Varentstraat, the escapees had increased their gap to 45 seconds. And, by the time they had reached the climb of the Tiegemberg, their lead was hovering at around a minute.

At top of the climb, Cancellara commenced an attack, with only Paolini, Vanmarcke and Boonen being able to stay onboard with him. In the meantime, Boasson Hagen took control of the chase on the decent, ultimately bringing back Cancellara, but leaving De Vreese, Cousin, Konovalovas and Devolder still out front.

With 10 kilometers remaining, four leaders still clung to a 35 second lead over the first chase group.

With 3 kilometers remaining, the quartet as still holding together. However, Vandenbergh twice initiated attacks of his own – to no avail.

As the race entered into the final kilometer, a relentless Vandenbergh attempted to dislodge his companions one last time with a final surge at the 500 meter mark. However, Sagan was quick to respond – ultimately winning the sprint.