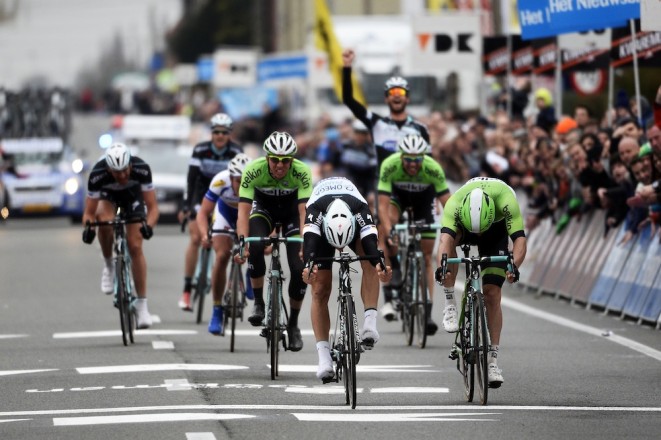 Today’s race saw a breakaway group of four riders containing Vladimir Isaichev (Katusha), Silvan Dillier (BMC), Gert Jõeäär (Cofidis) and Michaël Vingerling (Team 3M), get underway early on. And, at one point, the quartet build up a maximum lead of four minutes over the peloton.

Following the climb of the Cöte de Trieux, the Belkin team began to increase the pace – subsequently causing fractures within the peloton.

Upon reaching the climb of the Oude Kwaremont, Omaga Pharma then began upping the pace under the auspices of it’s rider Stijn Vandenbergh. And, on the descent to Berchem, the peloton split further – with both Belkin and OmegaPharma keeping careful control over Andre Greipel (Lotto Belisol) and Edvald Boasson Hagen (Sky).

With 70 kilometers remaining, both Belkin and Omega Pharma  succeeded in splitting the field into a 10-man breakaway group containing Boonen and his teammates Stijn Vandenbergh, Matteo Trentin, Guillaume Van Keirsbulck, Nikolas Maes, along with Sep Vanmarcke, Moreno Hofland, Maarten Wynants, Johan Vansummeren (Garmin-Sharp), Yves Lampaert (Topsport Vlaanderen-Baloise). And, despite the efforts of Sky, Lotto Belisol and Katusha, the escapees quickly established a gap of one minute over the chase.

By the 120 kilometer mark, the breakaway succeeded in reeling in the remaining four escapees. And, from there, Boonen et al quickly established a one minute lead over the peloton – as they approached the climb of the Tiegemberg.  And, by the climb of the Nokereberg – their gap had increased to 1:10.

However, as the race passed through Waregem, it appeared as though the breakaway’s lead was slowly starting to diminish.

Still, as the breakaway group entered into the final 16 kilometer finishing circuit in Kuurne, their lead  continued to hover around a minute. It was then that a number of teams decided to give up the chase. And with that, went the chances of Greipel and other sprinters hoping to contest the sprint.

Up ahead, the pace of the breakaway continued, with Wynants attempting a solo move of his own in an attempt to shake up the Omega Pharma team, but to no avail.

Into the final corner, Boonen appeared to have picked the wrong line, but after quickly repositioning himself, the Belgian rider managed to stave off a last acceleration from Hofland.