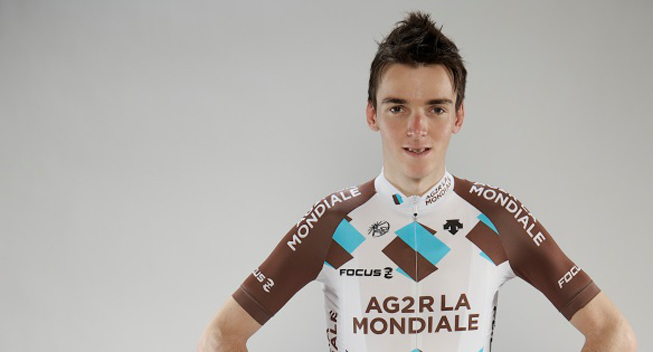 peloton early. After 40 kilometers the lead group numbered 36 riders, which swelled to 52 by the 60-kilometer mark.

The Verandas Willems team did the bulk of the work to bring the peloton together again, and by 80 kilometers it had all regrouped.

The next significant move of 18 riders forged off the front with 80 kilometers to go, which included both Riccardo Zoidl and Fabio Felline of Trek Factory Racing. The gap grew to almost two minutes before the peloton behind gradually reeled in the leash; with 50 kilometers remaining their lead had shrunk to 35 seconds.

Sensing an imminent catch, six riders slipped away from this group – including Zoidl – as behind a chase group of 12 formed out of a fatiguing peloton. The 12 riders would eventually connect with the six leaders, while a defeated peloton lost ground; it was now a race amongst the 18 riders at the front.

The attacks did not stop as riders jumped off the front, testing whom, if any, had any legs left. The group whittled down to number 13 with under 20km remaining, and Zoidl continued to battle, seemingly to be one of the strongest.

On the last categorized climb with 10 kilometers left, six riders went clear gaining 30” advantage, again with Zoidl, but the group behind would scramble back and relatch.

Attacks continued through the final kilometers, until finally Romain Bardet (AG2R La Mondiale) countered a move that no one could respond to. He powered away and had gained seven seconds advantage under the flame rouge. It proved to be the winning move and Bardet soloed in to take a strongman’s victory.  Behind, the remaining 11 riders sprinted for the last podium steps, with Sébastien Delfosse (Wallonie-Bruxelles) and Gianni Meersman (Omega Pharma-Quick Step) grabbing second and third respectively.

Riccardo Zoidl placed a respectable 11th after playing his hand numerous times in a highly spirited and tactical battle.

Romain Bardet said after he crossed the finish line:

“It’s a collective success that rewards the work of a whole group. We came close to the victory yesterday and we took the start this morning with same desire to succeed. I want to thank all my teammates without whom this victory would not have been possible. There’s really a great atmosphere in the team. Everybody works with same mind and we are all very motivated and glad to meet up, riders and staff. We have fun together, outside and on bike, and results follow.

"It was a challenging race from the start. The AG2R LA MONDIALE team has been present in all important breakaways and my teammates helped me to be well placed throughout the day. We had some information about the route thanks to Guillaume (Bonnafond) and Axel (Domont) who are native from this region. In any case, it’s a real pleasure to continue the series of victories of the team, obtained these last week-ends.
That’s important to win on the early season. Last year, I had to wait until August to get a victory and I’m very happy to win this season on March. It validates the work I did this winter and it’s important as we approach the major races.”

“This race was demanding from the start to the end with a lot of wind and some splits. The team were present from the start with six of our riders in the first split and then we put at least one guy at the front in every important moments. In the final part, we still had three riders at the front with Mika (Cherel), Guillaume (Bonnafond) and Romain (Bardet). As yesterday, the AG2R LA MONDIALE Team was at the attack. We knew that it was the right tactic because we would not have been in a favourable position in case of a final sprint. Romain perfectly followed these instructions and he has attacked three times on final kilometers. He did well to insist, all the more since we saw the group with Philippe Gilbert that was coming back on breakaway on the final kilometer.

"It was once more a great collective race. The team was ubiquitous and we can say that is not only a win but a victory obtained in the good manner. The Team AG2R LA MONDIALE works well these last week-ends and we keep fingers crossed to continue as well!”