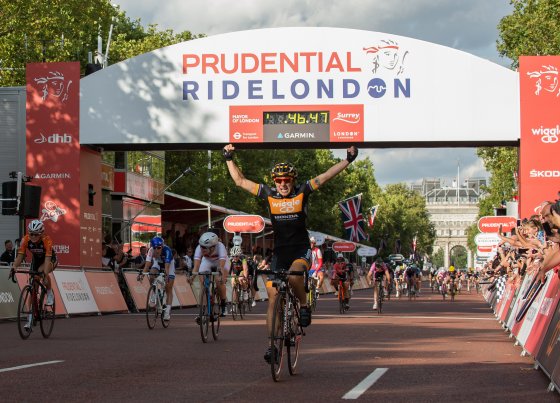 Team Wiggle Honda retained the Prudential RideLondon Grand Prix title last evening, thanks to Giorgia Bronzini who pipped the world and Olympic road race champion Marianne Vos in a thrilling sprint finish on The Mall in central London at the end of the greatest women’s criterium ever held in the UK.

The Italian timed her effort to perfection to snatch victory by less than a quarter of a wheel over the Dutchwoman who won Olympic gold on the same street two years ago.

Vos led off the final corner from Horse Guards Parade at the end of 15 laps of the 1.3-mile circuit around St James’s Park, but Bronzini was dragged into contention by her teammates Laura Trott and Peta Mullins, and launched herself to the line alongside the world number one.

Bronzini threw her arms in the air and Vos stretched out her hand in congratulations, but it was so close that at first the announcers weren’t sure who would get the verdict.

When the result was confirmed, Bronzini beamed with delight, relieved that she had made amends for her last appearance in London when her chances of an Olympic medal were ruined by a flat tire.

“That felt so good,” said Bronzini, a former world champion who celebrated her 31st birthday last Sunday. “Any time you beat Marianne in a sprint you know you’re going to win.”

Twelve months ago it was Trott who snatched victory for Wiggle Honda, but this time the 22-year-old Londoner played a supporting role, aiding Bronzini’s last-lap bid for the line, an effort the Italian was swift to acknowledge after the race.

“In the middle of the race I asked my teammates to make it hard and put in attacks to take the sting from Vos,” said Bronzini. “What I did today was because of the support of my team.

“I think we made her tired by attacking as a team. That was our tactic today, and in the end it was a great sprint into a headwind.

“She was ahead until 100 metres to go when I passed her, but she came back and I had to push hard in the final 50 and lunge for the line.

“The last time I was here for the Olympics it was not a good day, so this time I wanted to win badly. It is so amazing to win here in such a historic city and in front of these amazing buildings.

“I really like racing in the sun, and today was a beautiful day.”

Vos had come to London in great form after winning the Women’s Tour of Britain in May and the La Course race for women at the Tour de France last month. Wearing number one on her jersey, the team Rabo Liv rider was the pre-race favourite and looked a certain winner when she kicked off the final bend at the head of a large bunch, but later admitted that she couldn’t respond to Wiggle Honda’s determined teamwork.

“It was a hard race with a lot of breaks,” agreed the much-medalled 27-year-old. “On the last lap I was in the right position but you never know in a bunch sprint and I just couldn’t hold it at the end. I launched my attack early, maybe too early, but I am happy with second.

“Today Giorgia was faster on the line. I knew I couldn’t make any mistakes so it was always going to be close. At the end she was just very fast.

“It was so amazing to race here again, especially in such a great race,” she added. “To be part of a criterium with all the world’s top riders was an amazing feeling.”

Many had predicted Armitstead would be Vos’s closest rival, but the Briton admitted she was happy with third just a week after winning the Comonwealth Games road race gold in Glasgow.

“I had not really prepared for this because I’ve been concentrating on road races,” said the 26-year-old from Yorkshire. “For me it was not about winning today but about having some fun.”

“It was great to race on these streets though. It was so noisy with loads of people all the way round the course.”