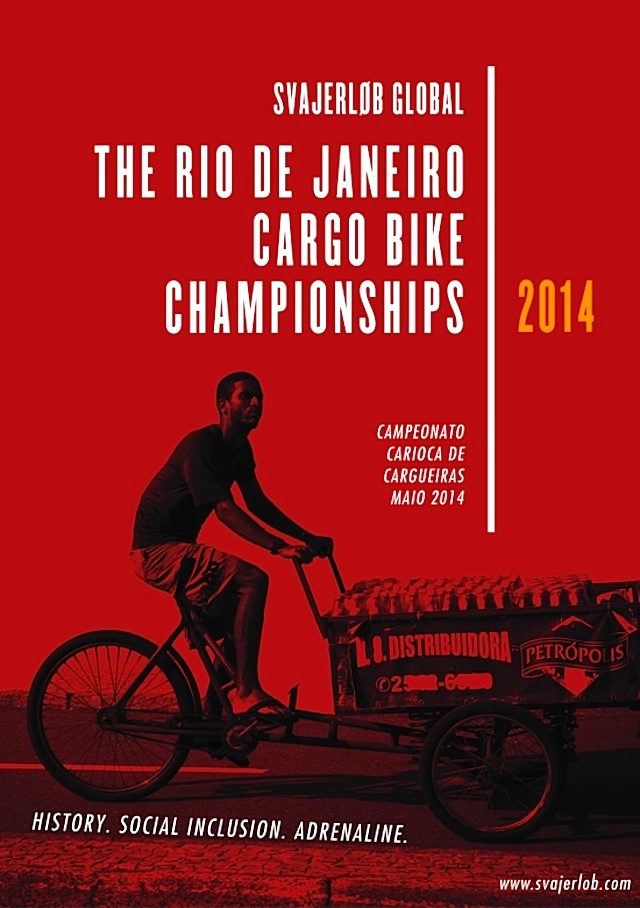 We have a dream. A project. A goal. Quite simply, it combines three fantastic bicycle ingredients: cargo bikes as transport in cities, the all-important social inclusion and a fantastic, traditional, historical bicycle race.

In May 2014, we want to stage the first cargo bike championships in Rio de Janeiro, in order to raise awareness about the hard-working cargo bike messengers of the city and elevate them to a position of much-deserved respect. We want to stage a high-profile event that thrills, inspires, and captures the imagination of the entire city.

A whole day of social inclusion wrapped up in a kickass, back-breaking bike race.

For 125 years since its invention the bicycle has been a powerful tool for urban transport. It has also been a powerful symbol for progress, modernity and, not least, social change.

In Rio de Janeiro’s Copacabana neighbourhood alone, there are an amazing 11,000 + cargo bike deliveries each and every day. The people who deliver the goods aren’t middle or upper class lifestyle cyclists. They are mainly from the poorer neighborhoods and they are largely invisible on the urban landscape – under-appreciated and undervalued – despite the fact that they are absolutely everywhere and completely indispensable. It is no understatement to say that large parts of the city would simply stop functioning without them.

They are the ultimate working class heroes. Quite possibly the hardest-working citizens in Rio de Janeiro. It’s time to give them some respect.

From Copenhagen to Rio with love

70 years ago in Copenhagen, the situation was identical to Rio today. A massive armada of cargo bikes were the backbone of transport in the city. A fantastic army of men and boys from the poor neighbourhoods made the city work. Men and boys who, like the cargo-bike drivers of Rio today, were also invisible in their social hierarchy.

They were called Svajere in Danish – or Swayers, because of the swaying motion of the huge bikes when heavily laden. In 1942, a priest named Kristian Skjerring decided to change things for the better. He wanted to give these svajere a pedestal on which to stand. He organised a Svajerløb in the city – a cargo bike race for these bicycle messengers.

The races become incredibly popular for the people of Copenhagen. Thousands came out to watch. There was prize money, but really it was about honour, and winning the right to call yourself the King of Copenhagen – at least until the next race. These Svajerløb races were held until 1960, when cars and vans started to dominate goods transport in the city.

In 2009, we revived the races in Copenhagen and they are held each year. This project, however, is about taking the traditional Copenhagen race and transporting it to Rio de Janeiro. From Copenhagen to Copacabana. The Copencabana, if you will.

It is our hope that all of you will see the value of supporting the staging of the first Svajerløb in Rio, and the immense worth of saluting these urban heroes with a crowdfunding donation, and helping us put them on a stage for the entire city – and the entire world – to see.

In May 2014, in different race categories, there will be champions and runners up. Prizes and medals will be won. But really, this will be a race with thousands and thousands of winners.

And the bicycle will be their urban chariot.

Copenhagenize is partnering with our good friends at Transporte Ativo, the Brazilian mobility NGO to put together the best possible event.

Where will your money go?

We want the event to be a great celebration of cargo-cycling culture in Rio de Janeiro. Organising a big event like this requires lots of planning. We need to set up the course, publicise the event, and put up a big screen so the crowds can see all the action. The more we raise, the better and more high profile the event, and the more we are able to do justice to the hard working cargo bike heroes of Rio de Janeiro.

We will use some of the money raised as prize money – whilst it’s not all about the race winners, having prize money will make entering the race even more popular, and make a significant difference to the lives of the winners.

We are determined that this will be big success. Our idea is to do this well in Rio, so it can spread to other cities in Brazil and South America who are already keen on the idea. Eventually we hope to even have South American championship. Imagine the huge benefits for the poorer neighbourhoods of a massive high-profile event across the continent. But first we need to do this Rio de Janeiro event well. And to do it well, we need your help.