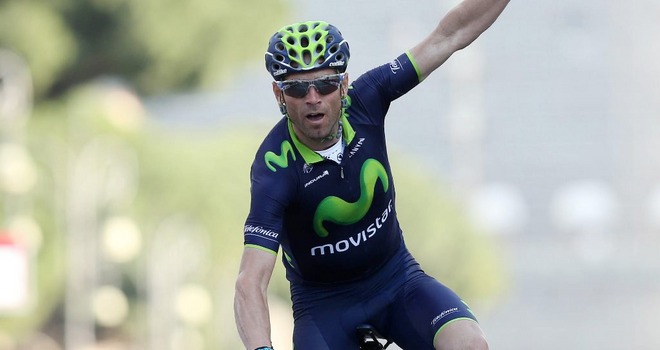 Alejandro Valverde narrowly held off the peloton to claim victory in the 2014 Roma Maxima today.

With 37 kilometers remaining, the Movistar rider, along with Domenico Pozzovivo, managed to escaped from a severely thinned-down peloton, and remain out front just long enough to stay outside the reach of the chase.

The escapees quickly opened a lead along the flat roads heading south from Rome. At the 50 kilometers mark, the gap reached 6:30, with the peloton now beginning to chase.

The first climbs of the stage came after 100 kilometers of racing, with a 10 kilometer climb up to the summit of Rocca Massima and Colle Callaccio. At that point, the escapee’s gap fell to just three minutes.

From there, Movistar began doing most of the chasing, along with some help from Bardiani-CSF.

On the climb to Rocca Priora, the breakaway group began to fall a part, with  Gastauer attempting to ride clear alone, but to no avail.

The decisive move by Valverde and Pozzovivo came on Campi di Annibale climb, where two riders succeeded in riding clear of the chase. And, from there, the duo began carving out a slight lead.

Over the Cappuccini climb, Valverde and Pozzovivo gained additional time over the chase, where they managed to increase their lead to 30 seconds  –  with 20 kilometers still remaining.

The chase group continued to linger at 30 seconds back, when they were caught up by the peloton. From there, the duo’s lead began to dwindle rapidly as well. However, a determined Valverde refused to give up, as they race headed over the cobbles of the Appia Antica – with five kilometers remaining.

Matteo Rabottini and Samual Sanchez made a last ditch effort to try and catch the escapees. And, with Valverde and Pozzovivo in their sights around the final loop of the Coliseum, the race suddenly seemed wide open. However, the chasers were unable to catch them before the final three hundred meters.

From there, Valverde timed his sprint to the finish well enough to escape the grasp of the peloton, to seize the win.