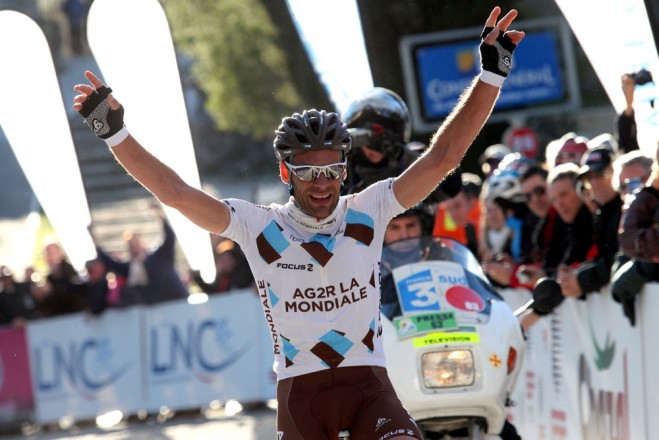 Jean-Christophe Peraud won the 4th and final stage of this year’s Tour Méditerranéen, with a solo finish ahead of Eduardo Sepulveda and Stefan Denif – atop  Mont Faron. Meanwhile, Stephen Cummings successfully defended his yellow jersey to claim the overall race victory.

"It was so close, I went way over my limit," Cummings said. "I just did my best and luckily it was good enough."

Today’s victory marked the second year in a row that Peraud won the Mount Faron stage in the Tour Méditerranéen.

The 36-year-old French rider began today’s stage in fourth place overall. However, his determination along the final ascent – earned him the second spot on the podium.

"That’s a great collective win," said Peraud. "Instructions were followed and it paid off. I knew this stage would be physically demanding but I have been well supported by my teammates. Yauheni who helped me to attack on the middle of the climb and so to leave behind my competitors."

Today’s stage saw a four-man breakaway group containing Omar Fraile, Rudy Kowalski, Mark Christian and Tom Dernies off the front for most of the day.

However, with 11 kilometers remaining, the quartet was caught as the peloton began to approach the final climb of the day.

After a flurry of unsuccessful attacks, Eduardo Sepulveda was the first rider to make his way clear of the peloton, subsequently creating a gap of 17 seconds – as the race headed into the final two kilometers.

At that point, Peraud commenced a counterattack of his own – ultimately catching and dropping the  Argentinian rider in the final kilometer.

Egor Silin of the Katusha team outsprinted Riccardo Zoidl for fifth place – allowing him to hold onto his spot on the podium.