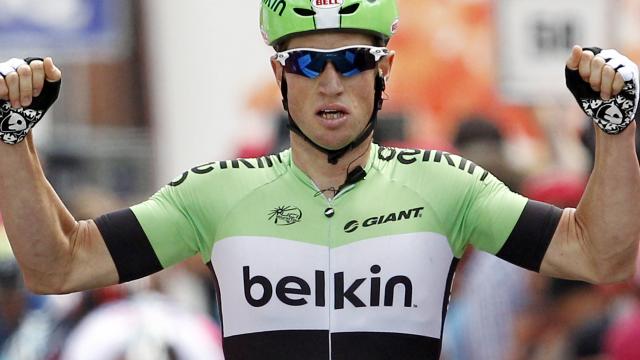 Theo Bos won stage 2 of the 2014 Tour de Langkawi just ahead of his teammate Greame Brown – after a finale marred with crashes.

The Dutch rider managed to avoid the mêlée that occurred in the final 500 meters, while Brown stayed out in front to claim second place over Marco Haller.

However, things did not go as well for Andrea Guardini, as the Italian got caught up in the incident – and subsequently taken away by ambulance with puncture wound to his foot.

Despite his victory, Bos gave little celebration out of respect for the twenty some odd riders who were involved in today’s crash.

“I don’t want to salute and be so much happy (because of the crash), some see it the other way,” he said at the finish. “There was many crashes. I hear on the corner to the left with 500 meters to go, no before, there was a crash and also in the last corner, behind me.”

Bos indicated that his goal at this year’s Tour de Langkawi is to win as many stages as he can before returning to the Europe to participate in higher caliber races.

“There are a lot of sprints and it’s not a super high level. Also for my team it’s important to get the number of victories up,” he explained. “I’d rather ride here than do Paris-Nice where you might be satisfied with a third spot. I’d rather win here. Paris-Nice is a very hard race for me.”

Earlier in today’s stage, a breakaway group containing Ho Junrong, Behnam Khalikhosroshahi, Elchin Asadov, Tural Isgandarov, Jiang Zhi Hui and Rashid Ibrahim, got underway within the first few kilometers of the race. However, despite enjoying being out front for most of the day, the five riders were caught within the final 10 kilometers.