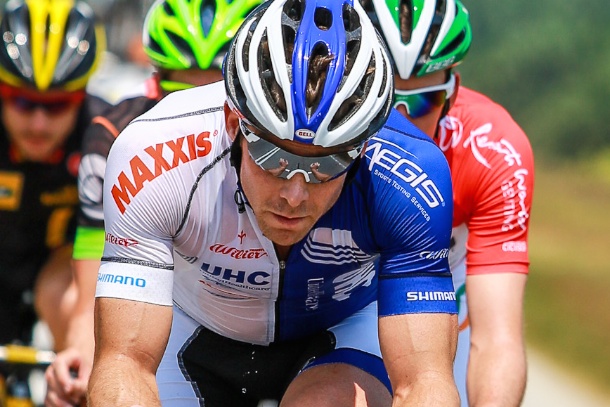 United Healthcare Pro Cycling got their first win of the season through their most unlikely source of Bradley White, who beat OCBC Singapore’s Thomas Rabou in a two-man sprint for the finish to take Stage Five of 2014 Tour of  Langkawi – covering 139.5 kilometers from Karak to Rembau today.

The two riders joined MTN-Qhubeka’s Louis Meintjes to form a three-man breakaway group midway through the stage, as they left behind Synergy-Baku’s Elchin Asadov, Androni-Venezuela’s Alessio Taliani and Aisan Racing Team’s Yoshimatsu Hiratsuka, who began the breakaway with them after just three kilometers of racing.

At one point, the escapees opened up a six-minute gap over the peloton – putting pressure on the overall leader Mirsamad Pourseyedigolakhour, who held just a third minute gap over Meintjes – which meant the South African rider stood the chance of wresting yellow leader’s jersey from him.

However, the Tabriz Petrochemical Team did just enough to protect it’s leader by closing the gap to 1:19  by the finish line for Pourseyedigolakhour to remain in the lead. Still, Meintjes finished in third place in the stage, just behind White and Rabou, to move up into 10th spot in the general classification – just 1:41 behind Pourseyedigolakhour.

The 32-year old American  was pleased with his win, especially since he was a last-minute replacement on United Healthcare’s squad for this year’s Tour.

"I’m normally used by the team for criteriums and even then I’m just as a lead-out man for our sprinters, so I don’t normally get the opportunities to go for wins," said White.

"I’d also gone on breakaways three days in a row so, as they say, you get third time lucky. I was on the break in Stage 3 and was caught in the final kilometre to the finish in Kuala Lumpur, then yesterday in the Genting stage I was on the break again. Today, as we opened up the gap and went further and further, we started to think this would really work and in the end I saw the line and just had to sprint for it.

"Any win, no matter how big or small the race is, for me is sweet. So, to be able to win a stage here is especially a good feeling."

Rabou was quite disappointed with his second place finish despite moving into the overall points classification lead, although he is tied on 40 points with Synergy Baku’s Matt Brammeier.

"I rarely get an opportunity to be in a position to win a race, so today with the break happening and to come so close to winning and then losing it at the last moment like that is a disappointment," said Rabou.

Pourseyedigolakhour said he wasn’t too worried about losing the overall lead, despite Meintjes posing a big threat with the breakaway opening up a six minutes gap for a long period during the stage.

"We have a strong team and I am confident we will be able to control the race and keep the yellow jersey until the finish in Terengganu," said Pourseyedigolakhour.

The Tour of Langkawi continues tomorrow with a long 199.1 kilometer stage  from Melaka to Pontian.