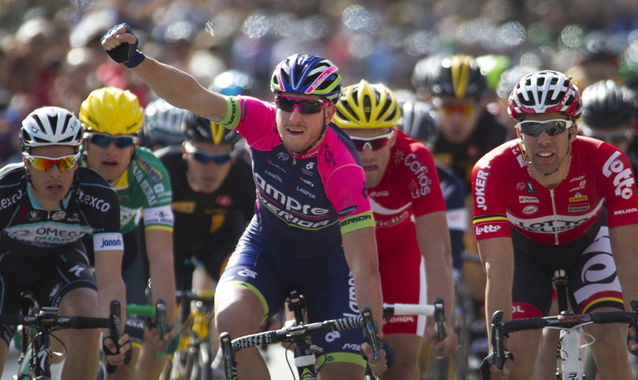 The Italian rider beat Ben Swift and Gianni Meersman in an uphill sprint. Modolo is only the second Italian to win two stages at this event – since Mario Cipollini did in 1999.

"Today I won more decisively, I knew with this slight climb to the finish I would be in my element, there were a lot of corners but once again Max guided me through perfectly", said Modolo."

"The team did a lot of work today in very difficult weather conditions. I knew I could do well, but winning an uphill today was always going to be a special kind of challenge. Looking a lot further ahead I would hope to do well in a race like Milan-San Remo, too, but we’ve got a lot of cards to play – Pozzato, Ulissi, and in my case maybe see if we get a sprint and see what happens."

Last year’s Milan-San Remo winner, Gerald Ciolek, was unable to contest the sprint, as the German rider crashed out midway through today’s stage. Adrew Talansky also crashed and abandoned the race. However, it was reported that his injuries were not serious.

In today’s finale, Modolo found the perfect line to follow during the finishing straight. However, this was not the case for Swift, as the British rider was inadvertently cut-off by Meersman as he was being leading out by his teammate Edvald Boasson Hagen to contest the sprint with Modolo.

Swift and Meersman exchanged words after the finish.

"It was a shame because I think I had a chance of wining that and if people had held their line… he came over from his line and I had to stop and start again. It’s frustrating but I’m getting better," Swift said.

"He said he kept a straight line but he didn’t and he needs to go and have a look at the finishing video. It almost looked like he saw me coming and then turned right."