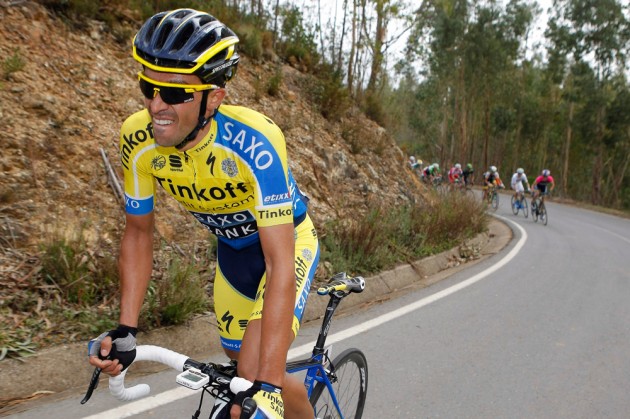 Alberto Contador won today’s "queen" stage of the 2014 Volta ao Algarve with one of his trademark accelerations on the short, steep climb of Alto do Malhao – that left Rui Costa and Michal Kwiatkowski struggling in his wake.

Today’s 164.5 kilometer from Almodovar to the top of the famous Alto do Malhao, featured a mostly flat stage until the end, where the peloton was met with a series of challenging climbs that featured gradients ranging from 9.6% to 13%.

A breakaway group containing Pablo Lastras, Michael Delage, Laurens de Vreese, Jimmy Engoulvent, Julien Fouchard, Paul Voss, Diego Rubio and Soufianne Haddi got underway after the 5 kilometer mark. And, from there, the escapees quickly built up a sizable lead over the peloton.

Rubio beat Engoulvent and Haddi in the day’s first intermediate sprint after 30.6 kilometers of racing. And, at that point the escapees had established a lead of 2:40 over the field.

The gap grew to 4:37, after Rubio beat Delage and Engoulvent at the second intermediate sprint – after 72 kilometers of racing.

However, this was the extent to which the escapees would get away, as the peloton began to up it’s pace – as the race entered into the hilly sections of the stage. Indeed, slowly but surely, the peloton succeeded in reducing the gap. And, as the race hit the climb of the Malhao for the first time, the escapees held only 2:13 lead.

De Vreese was first rider to cross the summit – beating Voss, Lastras, Rubio and Fouchard in the battle for the points. Meanwhile, the peloton exploded behind them, as Chris Horner set a brutal pace up the climb – cresting the summit several meters ahead of the main field, before falling back into the group.

Up ahead, Fouchard, Haddi, and Delage fell off the pace – leaving just 5 riders to continue on.

At the 126 kilometer mark, the gap of the remaining escapees had been reduced to a mere 26 seconds. And, a further 10 kilometers later, they were absorbed by the peloton.

At that point, Tinkoff-Saxo took to the front and set off a fierce pace in preparation for setting up their leader – Contador. However, Gorka Izagirre decided to initiate an attack of his own, who was soon joined by Bjorn Thurau, Oscar Pujol and Maxim Belkov, to form a 4-rider lead group that managed to gain a 20 second lead over the chase.

With 10 kilometers remaining, Izagirre and Thurau succeeded in dropping their companions over a short, steep climb – with Izagirre being the first rider over the top. Meanwhile, Tinkoff-Saxo’s Sergio Paulinho led the chase over the climb just 10 seconds back, as the Russian team continued it’s fierce pace-setting.

With 7 kilometers remaining, Thurau took off on his own. However, the German rider was quickly reeled in by the ensuing peloton.

From there, Ricardo Vilela launched an attack to no avail. In turn, Contador launched a fierce attack of his own – with only Kwiatkowski able to respond. However, the Polish rider was unable to hold the pace, and was subsequently passed by Costa. But, the world champion proved to be no match for Contador either – as the Spanish rider soloed across the line finish line.