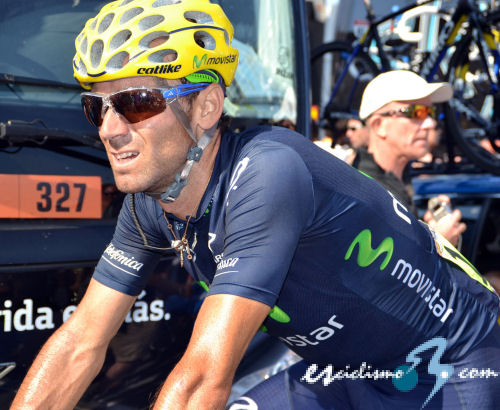 Alejandro Valverde won the 2014 Vuelta a Murcia on the slopes of the Alto Castillo de Lorca today – after he took matters into his own hands when his teammate Nairo Quintana failed to respond to a late attack from Tiago Machado.

Today’s race saw a seven-man breakaway group under the auspices of Enrique Sanz, get underway early on. However, the peloton never let the escapee’s lead extend beyond four minutes.

Indeed, the Movistar Team successfully reeled in the breakaway group just before the category 1 climb of the Alto de Espuña. However, in between the climb of the Collado Bermejo, Jérôme Coppel managed to get away – and subsequently opened up a gap of almost half a minute over the summit.

However, on the descent, Valverde made his move, and quickly bridged himself to the French rider. But, both lack of cohesion between the two riders and the determined efforts of the pursuit lead by CCC Polsat – ultimately reeled the duo back in.

However, with 15 kilometers remaining, under the close protection of his teammates, Valverde  was able to respond to a fierce attack initiated by Machado on the final climb of the Fortaleza del Sol.

From there, the Spanish rider executed one of his signature uphill surges – leaving Machado struggling to stay onboard.

Pleased with the outcome of today’s race, Valverde had this to say:

"I couldn’t race it some years, and I came close to winning last season," he said. "I really wanted to get a victory at home. I had the confidence from last week’s racing in Andalucía, but there were some teammates who could do well, too – we had to wait and value our chances when we were on the road. We still wanted to approach the climbs fast to make a selection into the group, and we succeeded.

"I chose to jump after Coppel to release some pressure off my teammates’ shoulders. Even though we got more than one minute, I knew it was hard for the two of us to reach the finish, because we could open a gap when the wind blew on our tail, but once we took the turn in Totana, the group would catch us – that’s how it happened, and that’s why I preferred to save energy in the finale, making the others behind spend energy while our guys could sit on their wheels.

"When we saw how everyone was going, we decided to play my card again. Machado attacked really strong, and even though Nairo went with him in the beginning, he eventually went solo. He was making a serious gap and I decided to make a long attack. When I was reaching him, I took some breath to accelerate again – and it turned out well."

Valverde is now ready to payback his team with a support role in tomorrow’s Clasica de Almeria – which traditionally suits the sprinters.

"I dedicate this victory to all my family, who were present here, and to the Murcian fans, who support me all year and were impressive on the roads today," he said. "Tomorrow in Almería, it will be time to work hard and keep this chance alive, but this time for another teammate."