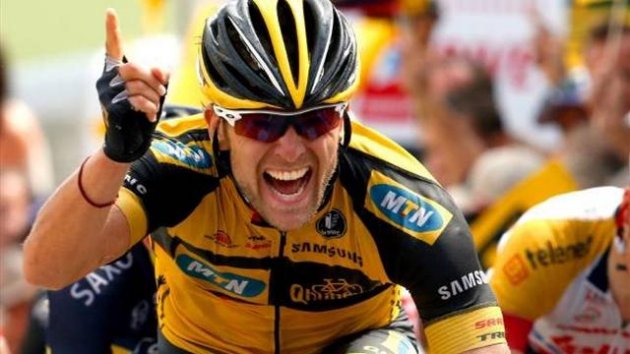 Gerald Ciolek claimed his first victory of the season today, by winning stage 3 of the 2014 Vuelta a Andalucia – in a very close sprint finish against Roy Jans, Moreno Hofland and Nikias Arndt in Seviila. In fact, the finish was so close, riders had to wait several minutes before race officials could confirmed the winner.

After two days of racing in the mountains, today’s mostly flat 183.8 kilometer route from Sanlucar la Mayor to Sevilla was not only a respite for the climbers, but it had "sprinter" written all over it.

Today’s stage got underway with a very fast pace. And, despite numerous attacks to establish a break, there was a protracted period of time before Fabio Silvestre, Edward Theuns, Martijn Tusveld and Haritz Orbe succeeded in forming a breakaway group around the 38 kilometer mark.  And, as the escapees reached the 40 kilometer mark, they had quickly established a gap of 1:15 over the peloton.

At the 51 kilometer mark, Theuns beat Tusveld and Orbe in the second intermediate sprint. And, at that point, the escapee’s gap over the peloton had increased to four minutes.

At that point, Team Sky came to the front of the peloton and began working in earnest to start reeling in the breakaway group.

Orbe beat Tusveld and Theuns to the top of the first climb, while Theuns in turn was the first rider over the second climb. Meanwhile, the peloton had succeeded in reducing their lead down to 2:20.

From there, the escapees managed to keep a stable gap of between 2 and 3 minutes over the chase. However, several teams began ushering their riders to the front of the peloton to further reduce the gap. Riders such as  Xabier Zandio, Francis De Greef, Jelle Vanendert and Yoann Bagot took turns pushing the front, eager to catch the escapees and move their respective sprinters into position.

With 40 kilometers remaining, the gap had been brought down to 1:50, and a further 10 kilometers later it had been reduced to a manageable 1:15.

With 13 kilometers remaining, and the escapee’s gap was down to just 30 seconds, when Tusveld decided to attack – leaving Orbe behind.

With 8 kilometers, Movistar hit the front with Ruben Plaza in place to protect Valverde. Meanwhile, Theuns decided to attack – leaving Tusveld behind – who was quickly swallowed up by the peloton.

At that point, Lars Petter Nordhaug of the Belkin team took up the chase – quickly succeeding in catching Theuns. With 5 kilometers remaining, Team Sky came to the front – with Bradley Wiggins setting the pace.

From there, Vasil Kiriyenka and Peter Kennaugh took over from Wiggins at the front. Shortly thereafter, a sizable crash took place at the front of the peloton. Fortunately, none of the big GC contenders were caught up in the fray.

Meanwhile, Kennaugh proceeded to lead out the peloton up to the final kilometer, when MTN Qhubeka moved in to go shoulder to shoulder with the British team.

While Team Sky and MTN continued to position themselves, Nikias Arndt of the Giant Shimano team commenced a long sprint to the finish – that subsequently disrupted the field and set off a scramble between him, Ciolek, Jans, and Hofland for the finish line.