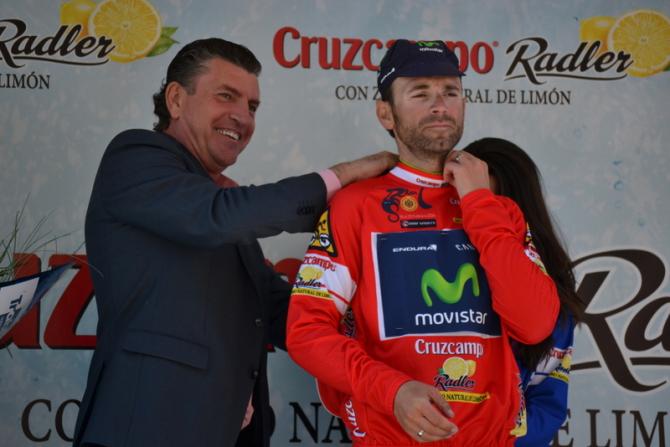 Shrewd tactics and excellent positioning handed Moreno Hofland the victory in the 4th and final stage of this year’s Vuelta a Andulucia, as the Dutch rider beat Nikias Arndt in a close sprint finish in Fuengirola today. Meanwhile, Alejandro Valverde sealed his overall title – marking his third consecutive victory in the Vuelta. .

With the presence of Txurruka in the breakaway, who was just 2:50 off of Valverde’s lead, team Movistar was forced  to keep a close watch over the group.

With 35 kilometers remaining, and a rapidly diminishing lead, cohesion amongst the escapees began to fragment. At that point, Dumoulin made two attempts to go clear.

At the 30 kilometer mark, the Dutch rider finally succeeded in a lone breakaway – subsequently stretching his lead back out to two minutes over the remaining field.

As Dumoulin posed little threat to the overall GC, the peloton (particularly Movistar) showed little interest in pursuing him.

However, as team Belkin moved into the front, and began upping their pace, Dumoulin’s advantage began to fall quickly. Still, the resolute rider continued with a fast pace up the climb of Coin.

With 12 kilometers remaining, Dumoulin still held a 45 second lead over the field.  However, at the 7 kilometer mark, Alexey Lutsenko managed to bridge himself to Dumoulin. But, that proved to be of little significance, as the gap at that point had been reduced to a mere 10 seconds. Indeed, as the peloton entered the final 5 kilometers, both riders were swept up by the field.

Shortly after Dumoulin and Lutsenko were caught, a determined  Topsport Vlaanderen-Baloise team took up the reins at the front of the peloton in it’s bid to set up their man Kenneth Van Bilsen for the sprint. With under 2 kilometers remaining, the Belgian team led the peloton into the final roundabout – with six riders emerging at the front, to include Hofland.

A group of three riders from Topsport led under the final kilometer banner. However, as they swung off in the last 400 meters, their sprinter Van Bilsen was left to face Hofland and Nikias Arndt alone.

From there, both riders swarmed past Van Bilsen in a charge for the finish – with Hofland opening up an insurmountable gap over Arndt.

Despite missing today’s final split – Valverde was wise enough to finish safely in 10th position to secure his overall victory in this year’s race.

Richie Porte claimed the second spot on the podium at 26 seconds down from the leader, while Luis Leon Sanchez finished in third a further 2 seconds behind.