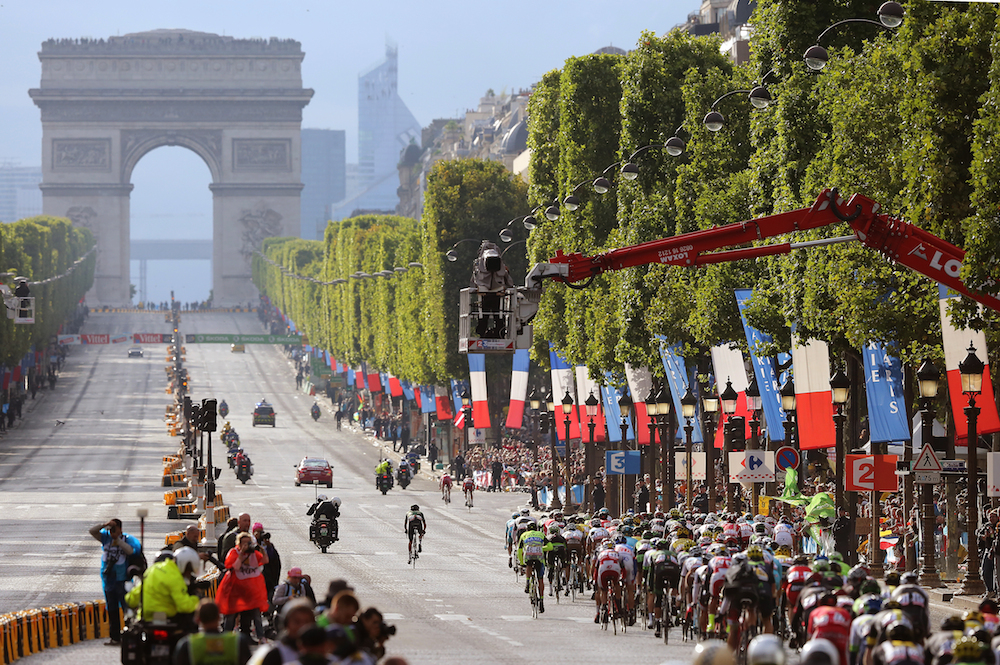 The 2017 Tour de France will visit the Alps twice, with the Pyrénées sandwiched in between and a time trial on stage 20 to decide the overall winner.
Dusseldorf, Germany, will host the Grand Départ on July 1, with the race also visiting Belgium and Luxembourg within the first four days before skirting down the east side of the country until the first rest day.

A transfer to the Pyrénées awaits riders ahead of the second week before the race heads back across the Massif Central into the Alps for a second time.

But the race won’t be decided by a penultimate-stage summit finish like the past few editions, with a time trial around Marseille likely to decide who will take the famous yellow jersey to Paris.

2016 Tour de France winner Chris Froome was in Paris for the route presentation. “Tough,” Froome said when asked of his reaction to the route. “It’s definitely going to be a climbers’ race from what I can tell. It’s very light on time trial kilometres but that’s all part of the race and that’s something I’m going to have to focus my training on, being the best I can be on the climbs.

“Certainly, from my first reaction there were quite a few stages going up over 2,000 meters. The Izoard goes up to 2,300 metres; that’s going to be an absolute beast of a stage. Initial feelings are that it’s going to be a race that is won or lost in the mountains. Of course, it’s the Tour and anything can happen so we have to be ready for all eventualities.”

Richie Porte said: “It’s quite a balanced course. There’s not a lot of time trialling but there is quite a bit of climbing but descending to the finish as well. There’s quite a spread between the Planche des Belles Filles on the fifth stage and then the Col d’Izoard on the 18th. There’s a lot of stages in between there with cross winds. I think it’s typical to stand here now and saw that it’s not a climber’s Tour but the road will always decide that.”

It was announced before the 2016 Tour de France that the grand départ for the 2017 edition will take place on German soil in the city of Düsseldorf. This first stage will comprise of a short time trial, similar to that of the 2015 race, which started with a 13.8km TT around Utrecht.

Stage two will also start in Düsseldorf, doing a small tour of the local area before heading out of town towards an unknown finish. The location of the city to the north west of Germany means we could be in for a stage finish in Belgium as the race heads towards France, with Liège – host of the 2012 Grand Départ – hosting the stage finish.

As can be expected with a race through Belgium, the parcours is pretty lumpy and the general classification could be shaken up early in the race with an uphill finish. It’s no mountain climb, but the ascent to Longwy hits 11 per cent over its 1.6km, averaging 5.8 per cent. Expect to see the Classics specialists and GC favourites in contention at the end.

The Tour de France returns to La Planche des Belles Filles, the site of Chris Froome’s first Tour stage win. Could this be the place where the Team Sky leader takes the early lead in the race as the leaders get their first chance to test their legs.

A lumpy stage is characterised by two categorised climbs in the final third of the day, culminating in an ascent to Station des Rousses.

Starting at altitude in Nantua, the peloton faces a categorised climb from the gun up the Cote des Neyrolles, with the route also taking in the Col de la Binche and the Grand Colombier in the middle kilometres and the daunting Mont du Chat immediately before the descent into Chambéry.

The race enters the Pyrénées from its traditional base, Pau, and as in 2016 the stage from the city will take in five categorised climbs, including the Col de Peyresourde immediately before the final climb to Peyregudes. The descent of the Peyresourde was the location of Chris Froome’s stage-winning attack in 2016, where he put 13 seconds into his rivals on stage eight.

The second Pyrénéean stage takes in three main climbs, including the Col d’Agnes and the Mur de Péguère before dropping down into Foix for the finish. At just 100km, this stage is the shortest mountain stage in Tour de France history and should be set up for some exciting racing.

The Tour returns to Rodez, having previously visited in 2015 as the race began its migration across to the Alps. Greg van Avermaet continued Peter Sagan‘s run of second-place finishes in that edition, beating the green jersey wearer in sweltering heat on an uphill finish.

The first stage in the second visit to the Alps sees the iconic climb of the Col du Galibier as the penultimate ascent of the day. Starting in La Mure, the peloton traverses the Col d’Ornon, the Col de la Croix de Fer and the Col du Télégraphe. The rider leading the stage at the top of the Galibier will be awarded the Prix Henri Desgrange, as the race passes its highest point.

A little bit of history for the 104th edition as the race finishes for the first time on the Col d’Izoard. The mountain has featured 34 times since 1922, but never has as stage finished on the climb. Interestingly, the Tour’s women’s race, La Course, will be contested on the Col d’Izoard this year – the first time in its four year history it has not taken place on the cobbles of the Champs-Elysées.

Shunning the tradition of recent years, stage 19 heads out of the mountains and towards the Provence region. A rolling stage may not shake up the general classification too much, though, as the riders prepare themselves for the following day’s time trial.

Penultimate stage time trials are not uncommon for the Tour de France, with the last being in 2014, although it’s not often that the race heads south for the final stage before Paris. You can’t get much further south than Marseille, where the deciding time trial will take place, with a long transfer for riders and staff up to the outskirts of Paris.

For the 42nd consecutive edition, the Tour de France will finish on the Champs-Elysées, where the fast men will battle it out for the ‘unofficial sprinters’ World Championship’ and the race leader will be crowned the winner.

The course of the 104th Tour de France (1-23 July, 2017), which was unveiled before an audience of almost 4,000 people at the Palais des Congrès in Paris, stands out for its atypical mountain stages. Although there will be fewer climbs than usual, their steeper gradients will separate the men from the boys. From the time trial in Düsseldorf to the one in Marseille on the eve of the finish, there are plenty of hat-tips to tradition. Inspiration for the brave.

Key points:
– 30 years after the 1987 Grand Départ in Berlin, the Tour will start in the German city of Düsseldorf and later head to Belgium and Luxembourg.
– The course of the 2017 Tour de France will feature France’s five mountain ranges. Tour favourites will go head-to-head on steep gradients. The           Izoard will host the last summit finish.
– Exceptional locations such as Marseille’s Stade Vélodrome and the Grand Palais in Paris will roll out the red carpet for the peloton.

Vosges, Jura, Pyrenees, Central Massif and Alps —the 2017 Tour de France will tackle France’s five major mountain ranges in this order. 1992 was the last time this mountainous Grand Slam was in the race. The new features it is rolling out this time around will raise eyebrows: the queen stage will tackle the Jura mountains between Nantua and Chambéry (Col de la Biche, Grand Colombier and Mont du Chat, for a total altitude gain of 4,600 m!); pretenders to the crown will go head-to-head in the Pyrenees in a 100 km stage from Saint-Girons to Foix; sections approaching a 20% gradient will provide fertile ground for attacks on La Planche des Belles Filles and Peyragudes; and the race will be decided in a spectacular climax on the Izoard, a fabled climb which will set the scene for the concluding mountain showdown in its first stage finish ever.

Mountain goats, however, will not have all the fun, and they will have to fight for the yellow jersey in a time trial on the Mediterranean coast, with the finish line right in Marseille’s Vélodrome stadium. The last time a stage finished in a football ground was in Bordeaux’s Parc Lescure in 1979. Less than 24 hours later, the peloton will be in Montgeron —start of the 1903 Tour— for the final stage, which will see them ride indoors in the prestigious Grand Palais. The Champs-Élysées will see a fast-man apotheosis to cap a series of sprints which will start in Liège and probably continue in Vittel, Troyes, Nuits-Saint-Georges and Romans-sur-Isère. Time to settle old scores…