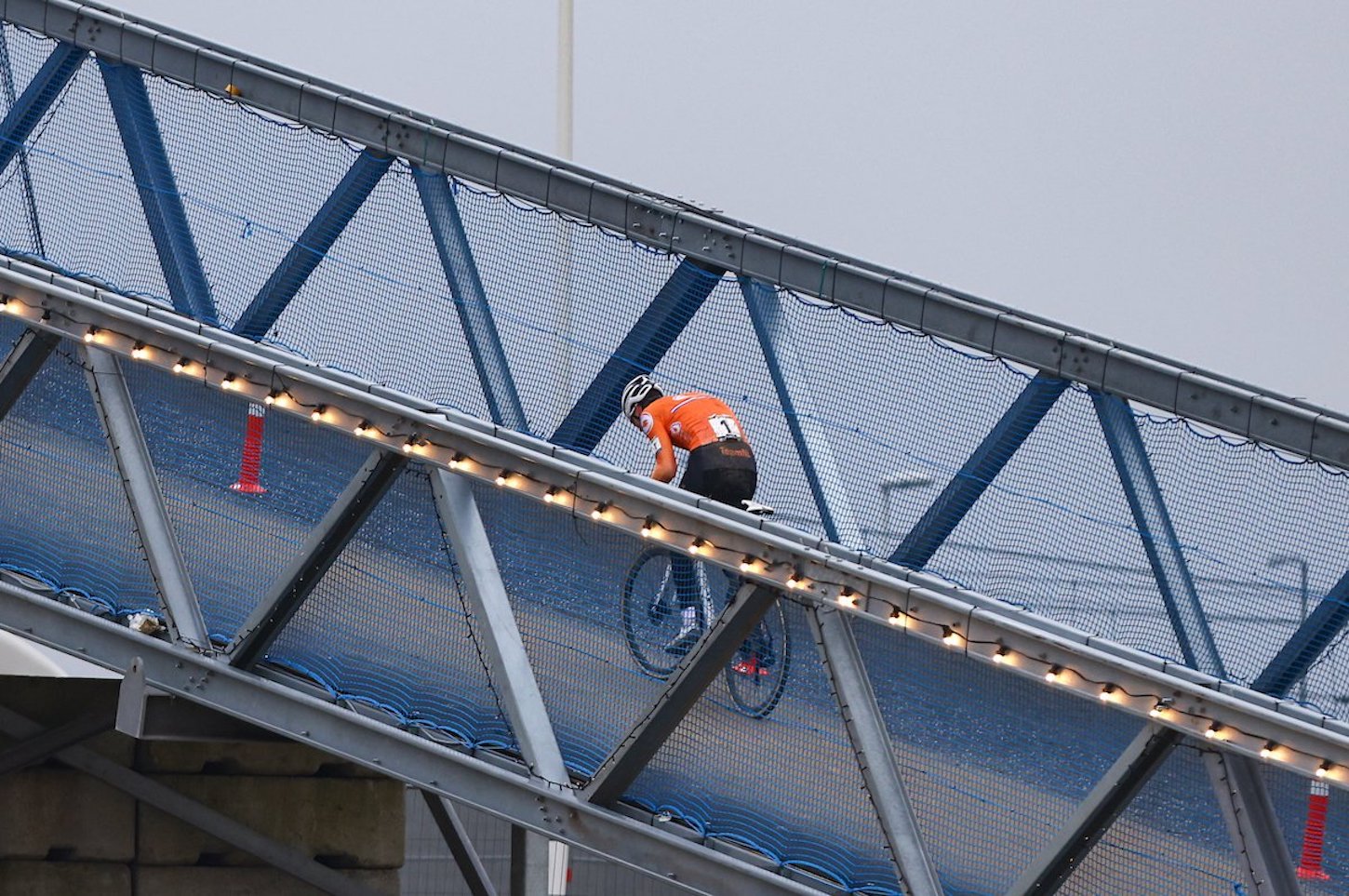 ‘The final day of the UCI Cyclocross World Championships in Ostend (Belgium) celebrated the rising talent of 18-year-old Fem van Empel in the Women U23 race and confirmed the rainbow supremacy of Mathieu van der Poel, who claimed a phenomenal fourth Men Elite title. Once again, the winners are all from the Netherlands with another Dutch rider, Aniek van Alphen, on the Women U23 podium, in second, and Hungary’s Blanka Kata Vas in third place – while the men’s was completed by Belgians Wout van Aert and Toon Aerts.

“I can’t believe it, I have no words”, said the new Women U23 UCI World Champion Fem van Empel, who claimed the third successive rainbow jersey for the Netherlands this weekend. “I think and dream about this. Before the race, mentally, I was very good. I believed in myself the whole race and on the last lap I could make it happen. It’s fantastic. In the sand, I made the difference. My coach said I must be first into the sand after the bridge. I pushed on the bridge, but Blanka Kata Vas went all out.”

“The flat tire for Van Aert was a little bit of luck from my side to come back but at that moment I didn’t feel the race was over yet,” said Mathieu van der Poel. “The course changed and became a bit faster at the beach section and I felt (I had) a bit better legs by then and I improved every lap running through the sand, so the good feeling was growing lap by lap and that made the difference for me today.”

One year ago Fem van Empel was primarily a soccer player who moved to cyclocross inspired by her father Paul, an amateur CX rider when he was younger. Fast forward 12 months and, at just 18 years, 3 months and 25 days old she took fourth place on the prestigious and tough Dendermonde (Belgium) course in the UCI Cyclo-cross World Cup, ahead of several bigger name riders including the 2017 Women U23 UCI World Champion Annemarie Worst from the Netherlands and former triple rainbow jersey winner, Sanne Cant from Belgium.

As in both races on the first day of the UCI Cyclocross World Championships, the decisive action came on the demanding deep sand section where the Dutch rider attacked thanks to her powerful running and pulled out an important advantage over her compatriot Van Alphen and Hungary’s Blanka Kata Vas – who went on to finish second and third, respectively, with gaps of three and nine seconds.

The 2019 U23 rainbow jersey winner, Inge van der Heijden, from the Netherlands, had led the race from its tumultuous start – with several athletes involved in crashes, including Van Empel – and gained a lead of up to 10 seconds climbing the bridge back into the Hippodrome, but was caught by the trio and had to settle for fourth position at the finish.

The duel between Mathieu Van der Poel and Wout van Aert started right from the first corner, with the two favourites immediately taking off, also helped by a crash for the outsider Thomas Pidcock (GBR). The chasing group was made up of four more Belgian riders: Toon Aerts, Laurens Sweeck and Quinten Hermans with Michael Vanthourenhout, winner of the first round of the 2020-2021 UCI Cyclocross World Cup in Tábor (Czech Republic).

The turning point came on the second and third laps when Van Aert attacked on the sand, with the Dutch rider crashing shortly after. But the lonely lead of the Milan-Sanremo winner lasted only until the next circuit when Van der Poel changed his bike, came back quickly to the Belgian, and counter-attacked, gaining a few seconds also thanks to Van Aert’s puncture. The Belgian  was forced to change his bike; a draw in terms of bad luck.

The gap between the two rivals remained under 10 seconds until the fifth lap when the Dutchman accelerated and almost doubled his advantage. In the meanwhile, Pidcock caught Aerts, moving into third provisional place. Shortly before the sixth bridge climb, Van Aert was forced to get off the bike, saying goodbye to his dreams of taking a fourth gold this year.

Van der Poel’s lead increased lap after lap and despite slight difficulty just before the finish the 2020 Tour of Flanders winner triumphed in Ostend with 38 seconds over Van Aert. Third place went to Aerts in front of Pidcock, at 1’24’’ and 1’37’’ respectively. For the Netherlands it completed a perfect 2021 UCI Cyclocross World Championships with four wins out of four races.

The Netherlands dominated the first day of the UCI Cyclocross World Championships in Ostend, Belgium. Dutch athletes showed their prowess on sand, one of the sport’s most demanding terrains. First Pim Ronhaar in the Men Under 23 category then Lucinda Brand in the Women Elite : both winning races that were decided in the beach section, with its unpredictable and difficult surface that caused much drama.

The other protagonist of the women’s race was Annemarie Worst, who fell numerous times, but was able to fight with Brand until the last lap (and her last crash). It was a similar fate among the Under 23s for the other Dutch rider, Ryan Kampf, who, after a fall in the early stages, recovered to claim the silver medal.

“For so many years I was so close and now finally after such a great season, to finish it off like this is really cool,” said Brand, who made the podium in the last three editions. “Regarding the crash in the finale, we crossed each other and I just touched her elbow or something. It was the weakest point to touch her so it wasn’t really nice but also not easy to avoid that situation. Unfortunately, it happened”.

“This is an amazing feeling”, said Pim Ronhaar. “At the beginning it was a bit hectic with six or seven riders in front for the first two laps, but I felt really strong and every time on the bridge, I was constantly in place one or two, so that was great. After three laps, I didn’t even attack but just rode my own tempo and got six seconds. On the grass section I was just riding easy, so I had enough power for the sand which paid off in the end.”

Ronhaar tames the sand, Kamp crashes and remounts for silver

A majestic performance from Pim Ronhaar won him the 2021 Men U23 UCI Cyclocross World Championships. From the first lap, the Pauwels Sauzen-Bingoal rider was the most solid on the demanding beach part and on the second circuit he immediately pulled out a significant advantage over his rivals.

As expected, the tough course led to an elimination race. The first amongst the favourites to lose their chance of winning the rainbow jersey was the Briton Thomas Mein, while climbing the wet steps. On the front, his compatriot Ben Turner was the only non-Belgian or Dutch rider in the nine-strong lead group. Ronhaar showed his form, swapping first position with Belgium’s Niels Vandeputte, only experiencing a little trouble when he briefly slid out on the mud on the wet coastal section

The second descent off the bridge into the beach was the undoing of the defending champion – and favorite – Ryan Kamp, from the Netherlands, who crashed. Ronhaar took advantage of his technical ability in the sand, gaining four precious seconds from the chasing group which included Belgians Timo Kielich and Toon Vandebosch and the Dutchman Tim Van Dijke.

Kamp rejoined the chasing group while, on the front, Ronhaar was already too far away, with an advantage of 16 seconds to manage on the final lap: he won with 8 seconds in hand over Kamp, who completed an amazing comeback, and 14 seconds ahead of Kielich.

In the day’s second race, for the Women Elite category, the drama came as early as the first turn, with the crash bringing down both the reigning UCI World Champion, Ceylin del Carmen Alvarado (the Netherlands) and the Belgian former triple rainbow jersey winner, Sanne Cant.

Another Netherlands favourite, Lucinda Brand, took the lead immediately on the way to the beach, where almost all the riders had to dismount and continue on foot. While the Belgian Alicia Franck rolled over, Dutch rider Denise Betsema attacked, proving to be one of the best sand specialists, no doubt thanks to her regular training ground on the island where she lives, in the north of the Netherlands. Betsema started the second lap with a small advantage over the remounting Brand and their compatriot Annemarie Worst, while Alvarado took fourth position, with a great comeback after her early crash. By the second lap, the Women Elite race of the  UCI World Championships race had become a purely Dutch affair.

The second part of the race was a roller-coaster for Worst: along with Brand she caught Betsema before the end of the second lap, but crashed shortly afterwards, leaving the duo up ahead. But the 2017 Women U23 UCI World Champion was able to push hard on the following sand section, eventually taking the lead just before crashing and remounting once again.

And then, in the exciting shoulder-to-shoulder finale, Worst suffered a final, and this time decisive, crash: and after the UCI World Cup, Lucinda Brand triumphed in the UCI World Championships. Third position went to Betsema and fourth to the American Clara Honsinger ahead of another Dutch rider, Yara Kastelijn.