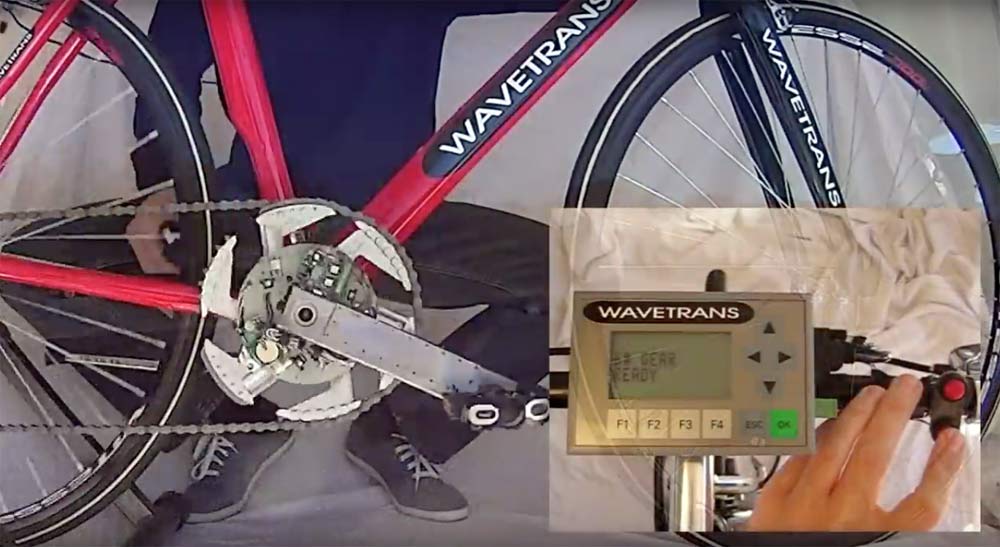 11 Jan 2016
By Campionissimo - In LATEST ARTICLES, THE DOUBLE DIAMOND

WaveTrans may have invented a new way bicycles shift, via the company’s far-out derailleur-less transmission system.

According the WaveTrans, their system works using push buttons that are controlled by a microprocessor and a programmable logic controller microprocessor (PLC), which in turn activates the groupset’s shifting and gearing.

Specifically, the WaveTrans has a single front chain ring, which is comprised of six separate sections that telescopically expand and contract as though they were six different gears.

Shifting is handled via two handlebar mounted buttons, alongside a control/display unit.

WaveTrans says, the virtue of their system lies in the fact, that not only is shifting a breeze, but the lack of componentry makes for a much simpler and seamless design, whereby cable tension, friction or spring force have all been eliminated.

It’s difficult to imagine what application this system could have for the hardcore roadbike segment, but as the urban cycling culture continues to grow, WaveTrans could very well gather the traction it needs to get past the prototype phrase.

The WaveTrans is something that you have never seen before.
It’s a new kind of Bicycle Transmission which uses a revolutionary logic.
You can change gears with a press of a button. It has six speeds.
It’s controlled by a microprocessor and a PLC which makes gear shifting really smooth and easy.

The WaveTrans has many advantages compared to old gear shifter systems (Derailleur for example);

1. It can be shifted uphill under heavy load. The pedals are always engaged.
2. No crunchy noises, the whole operation is quiet.
3. Smooth operation.
4. The chain never comes off.
5. Because the shifter is electronic it always lets you know what gear it is in.
No more looking back to the cassette to see what is going on.
(Derailleur many times double shifts causing riders to have to reshift to get to the gear they need to be in.)
6. The whole process is driven by two (up/down) electric switches on the handle bar.
No need to push the shifter hard anymore. Just push the button.

The prototype presented here is a proof of concept.

In order to be mass produced it needs to be further developed, therefore the final product
may look slightly different.

The expenses of the high volume manufacturing production line can be enormous.

Therefore, I’m looking for a partner or a buyer (company) for this product.

Patent has been filed.