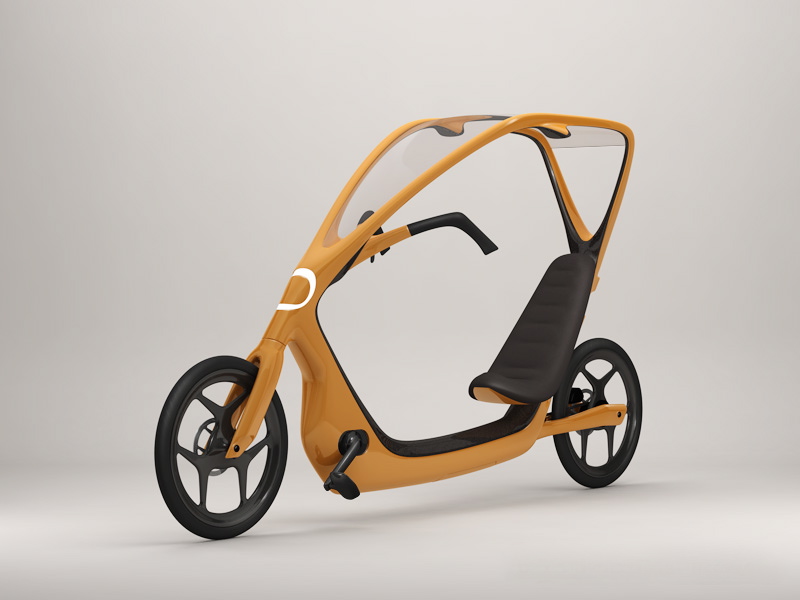 If urban cycling and/or commuting is up your alley, but you don’t care much for being subjected to the elements, then far-out concept bike called the ThisWay, just might pique your interest.

Drawing its design cues from both motor vehicle and motor bike, the ThisWay was designed by Torkel Dohmar as part of the Commuter Bike For The Masses design competition.

Given its hybrid composite/hydro-formed aluminum frame, the ThisWay is very light for a bike of its kind. And, it features front and rear LED lights, which are rechargeable via an onboard power supple.

According to Dohmar, the inspirational force behind the ThisWay, is not only to capitalize on the interests of existing bike commuters by offering  a bold new design, but to encourage non-cyclists to shed their cars and motorcycles, and take to the the urban cycling landscape as well.

Emphasis is made on automotive qualities in the design, to attract non-previous cyclists used to cars and motorcycles.

Another selling point to attract more people riding a bike (particularly here in Europe) is weather protection – ThisWay has a roof.

Built in composite materials (carbon or flax fiber) and some hydro-formed aluminium, this vehicle is very lightweight (approximately 11-12kg). It has built-in LED lights front and rear, powered by a rechargeable battery obtaining its power from roof mounted solar cells. For minimum maintenance ThisWay’s built-in belt drive is well protected and all cables are hidden within the frame.

The car-like ergonomics offers a riding position lower than a traditional bike to keep a low centre of gravity and optimal aerodynamics.

The rear of the frame has a “luggage connector”, where the user plugs-in his/her luggage (e g briefcase, helmet box or rack for shopping bags). The design also benefits from flexibility and comfort for riders of different sizes, as the crankset and seat is adjustable in length/height.

A “hybrid” version (pedal power/electric motor) will assist in hills and additional battery packs can be plugged-in into the luggage connector to extend the range further.

Although this design is more expensive to manufacture compared to its traditional rivals, it is still just a fraction of the price of a car and virtually zero in running costs…

There are roofed bikes out there on the market already such as rickshaws, recumbents, HPVs (Human Powered Vehicles)/velomobiles etc., so covered bikes do exist since a long time but the challenge is to design a functional and desirable bicycle that even appeals to non-previous cyclists.

It makes sense for a commuter bike here in Central and Northern Europe to offer some degree of weather protection for improved comfort. Instead of creating a totally enclosed design similar to other HPVs/velomobiles risking the user to feel isolated, a more open design will allow a higher degree of interaction with the surroundings.

The bike should have “attitude” with high visual impact giving the user a feel of “owning the street”.