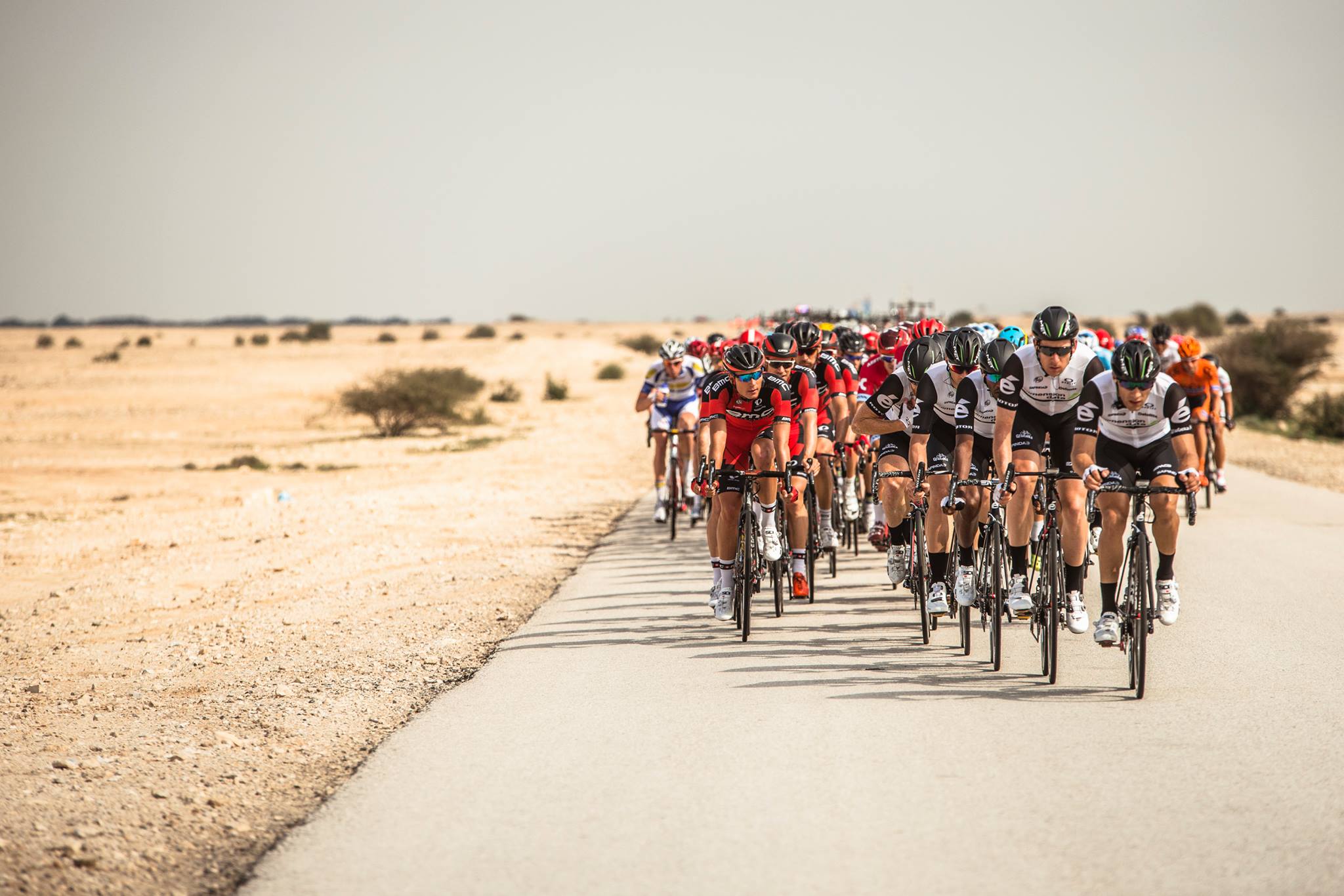 It took another photo finish to decide the final stage of the Tour of Qatar today, with victory once again going to Alexander Kristoff (Katusha), after nixing Mark Cavendish on the line.

The trio of Steven Tronet (Fortuneo-Vital Concept), Jesse Sergent (AG2R-La Mondiale) and Tom Declerq (Topsport Vlaanderen) got away early on in today’s stage, subsequently building up an advantage of 2:30 over the peloton – after 30 kilometers of racing.

In the meantime, Dimension Data saw fit to control the actions of the peloton back in the chase.

While the breakaway group enjoyed being out front in the limelight for most of today’s 114 kilometer stage, once the race reached the final 10 kilometers, the escapees were caught by the peloton.

From there, an AG2R La Mondiale rider briefly enjoyed a solo attack during the last 3 kilometers, but his efforts only lasted for a mere 500 meters before he was reclaimed by the peloton.

Heading into the final kilometer, Dimension Data, Katusha, Lampre and Astana were all vying for position, with each team attempting to position their respective sprinter.

Edvald Boasson Hagen, who had already put yesterday’s disappointment behind him, and did a crucial turn for Cavendish inside the final kilometer.

From there, it was Cavendish and Kristoff going neck and neck during the final 200 meters, which was so close on the line, that it warranted a photo finish – with the stage honors ultimately going to the Norwegian rider.

However, given his 2nd place finish, it was enough for Cavendish to seal the overall victory, by 5 seconds over Kristoff.

Meanwhile, Greg Van Avermaet (BMC Racing) grabbed 3rd spot on the final podium, while Boasson Hagen managed to hang onto his 5th place on position in the general classification.

We were really motivated for today and I have won this stage before a couple of times. The wind was always going to make it difficult today, it was a block head wind and we thought it was going to be cross. Actually it was more a cross head wind so you were never really comfortable. We knew we were going to have to take control and the team were really motivated after yesterday. Obviously we were in control at the beginning of yesterday but then with the puncture of Edvald it really put the team in a difficult situation. It also made it harder for us to take the overall today so we really had to be on top of our game to make sure we finished on the top step of the podium. The lads did it perfectly on the final laps when it was hectic, keeping me in the front and out of danger, so I was ready for the sprint, said Cavendish.

Obviously it’s nice to be wearing gold now, but I know I am only wearing it on behalf of Edvald. He only lost it because of bad luck and not through any other kind of cause. He should be the guy wearing this gold jersey but we are just super happy to keep it in Team Dimension Data. The team made the step up to World Tour this year and we’ve already won a GC. It is great for the new sponsors, Dimension Data, Deliotte and also to highlight Qhubeka here on the international stage, added Cavendish.