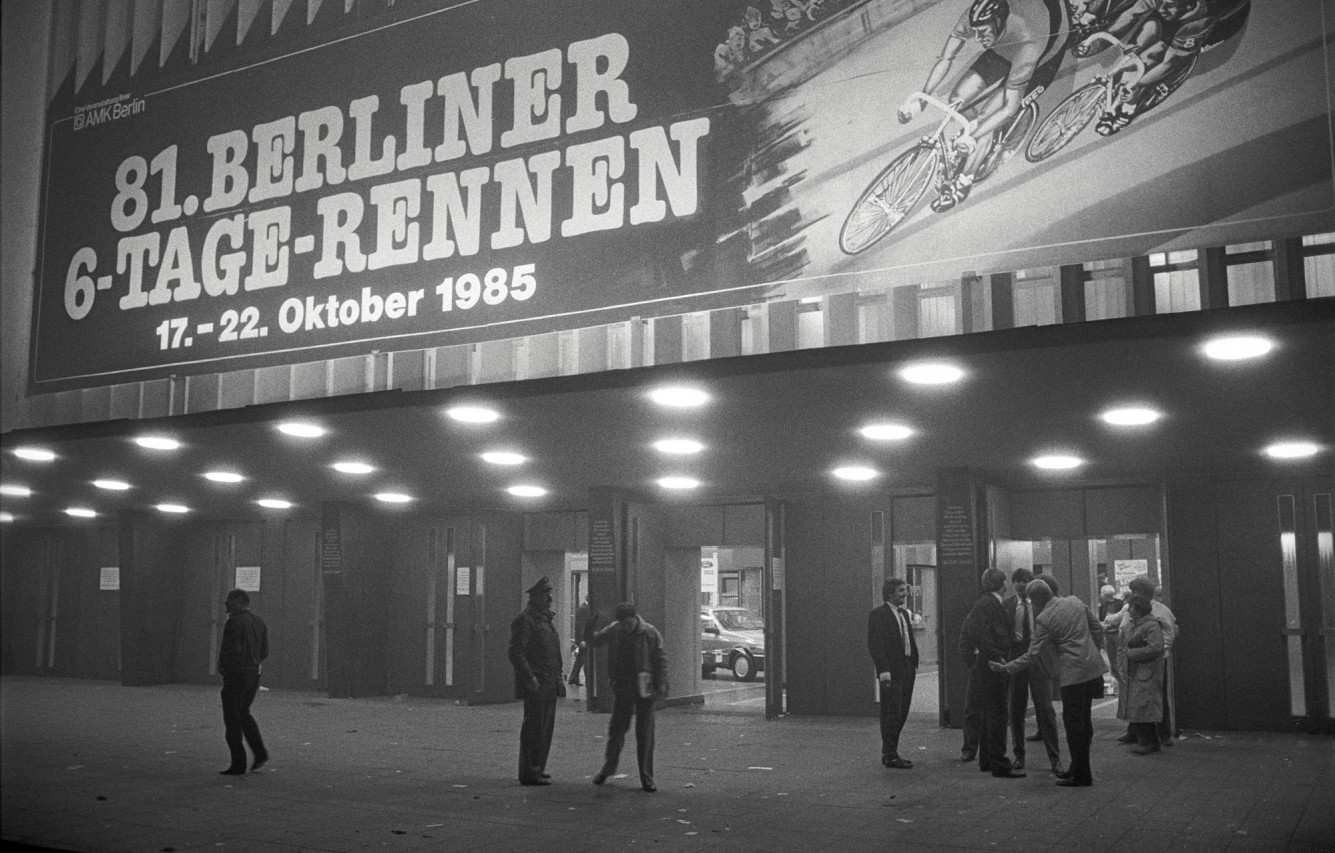 18 Feb 2016
By Campionissimo - In LATEST ARTICLES, THE PODIUM

While the sport of cycling was being universally embraced by most of the world, there was also a welling-up of political and social change that was coinciding with the sport as well.

Here, the historic photo essay by Swedish photographer, Staffan Jofjell, captures the aura and excitement surrounding the 1985 Berliner Sechstagesrennen Six-Day race in West Berlin, while simultaneously the political landscape was dramatically shifting underneath it – that would forever change Germany.

“17th of October, 1985, West Berlin, four days before the wall fell. The city is still an isolated island deep in East German territory. The cold war is more tangible here than anywhere in Europe although Glasnost will very soon spark the change that most Berliners are openly or secretly dreaming of. Trackside ‘85 is the work of Swedish photographer Staffan Jofjell and has been made public with the support of Ass Savers. The previously unpublished pictures were brought to life through a photo exhibition in 2014 that has been on show in Berlin, London, Barcelona, Oslo and Manchester. We are proud to finally bring this piece of cycling history to the internet. Enjoy.”

The tradition of the Berliner Sechstagesrennen is no exception and the city has hosted this event annually since 1909. On this chilly October Monday, the 81st race is about to commence in the massive Deutschlandhalle and among the spectators and riders, you can find a young photographer from Sweden. Staffan Jofjell had stumbled over a photograph in a café in East Berlin dedicated to the journalist Egon Erwin Kisch. It pictured hardy cyclists lining up for the 1925 edition of the 6-Tage-Rennen together with vibrant texts of Kisch, “the raging reporter”” He immediately became fascinated of what seemed to be the ultimate test of man and machine. Bicycles stripped down to their essence, men and women ready to prove their endurance in the setting of a city that had always fascinated him. That made it an easy decision to return later that same year, to photograph the race.

Jofjell spent the six days collecting visual impressions with his camera and recording the sounds of the event on a portable cassette recorder. Unfortunately, the sound tapes were lost shortly thereafter and because the aim was to make a still film, the photos remained unpublished for almost 30 years. When Staffan Weigel, co-founder of Ass Savers and long time family friend with the Jofjells heard about the unpublished pictures from Berlin they decided that it was time to tell the story about that October week to the world. The result is the photo exhibition Trackside ‘85, a small piece of cycling history.