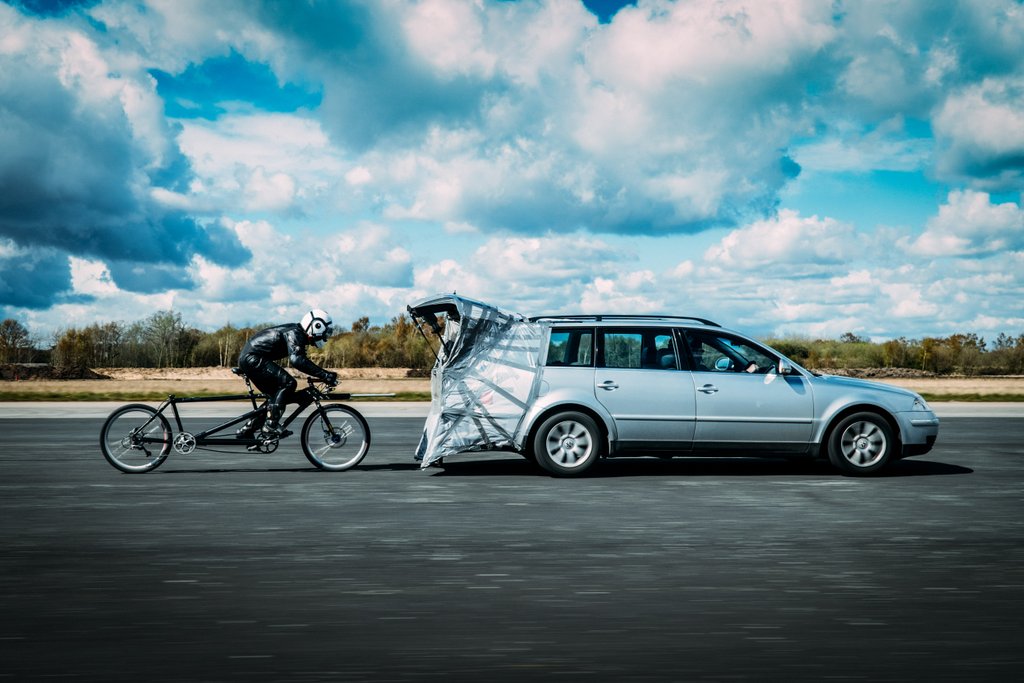 04 May 2016
By Lord Velo - In FEATURED ARTICLES, LATEST ARTICLES, VELOPATHIC

The daring duo and their team spent just £1,000 fixing up an old tandem bicycle, along with household items including a walking stick and an ex-military parachute, before taking on the record at Elvington runway in Yorkshire last week.

Le Grys had previously set the British and Commonwealth Cycle Land Speed Record back in 1987, after achieving a recorded speed of 110 mph.

In 2013, Le Grys trained Martin, who went on to set a new record that year, which was featured on the British TV series SPEED.

Le Grys and Campbell decided to try to break the record themselves, as a way of raising money for the BHF’s life saving research, after experiencing first-hand the devastating impact of heart disease.

Speaking of their recent success, a jubilant Le Grys said: “It’s fantastic to know that we have taken the record for the British and Commonwealth Cycle Speed record back! It’s been a massive team effort and I’m so grateful to the support of everyone involved in our Operation Pacemaker who made all this possible.

“We have raised over £1,400 for British Heart Foundation as their support following my open heart surgery just last year was incredible. We’re now looking forward to celebrating our success on the record and our smashing our fundraising target.”

Sophie Tibbitts, BHF Fundraising Manager said: “We’ve been cheering on the Operation Pacemaker team all the way and we’re delighted that they have now managed to take the record! It’s such an achievement and we’re thrilled that they chose to support the BHF along the way.

“However, we urgently need more people to join our fight for every heartbeat to help the 7 million people living with heart and circulatory disease in the UK. That’s why we’re calling on everyone across the UK to Raise Funds Your Way to help support our vital work.”