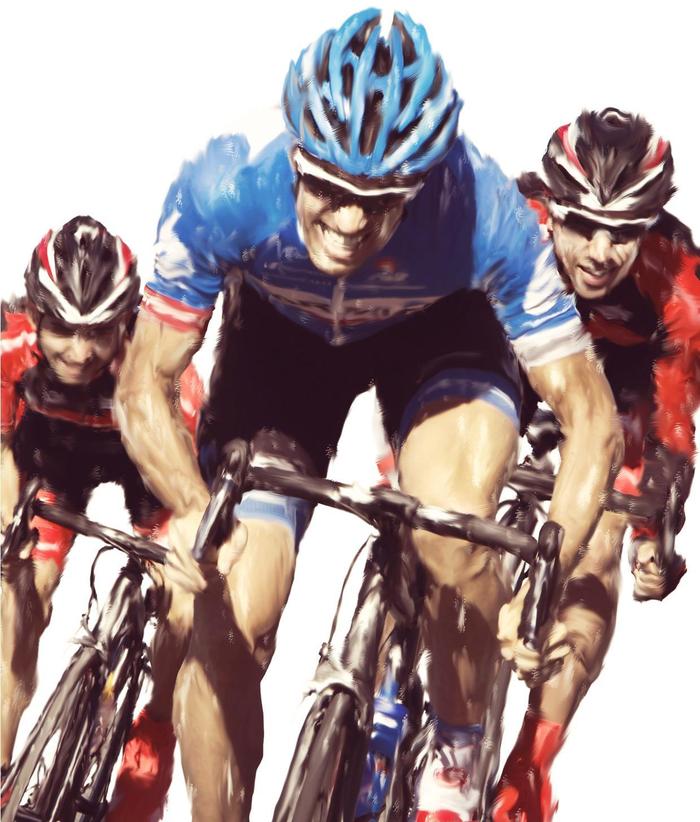 CYCLING PARTY is a board game that brings together the excitement of road cycling as a sport and the enjoyment of strategy games.

Direct and manage your own cycling team. Choose your race strategy, and look for the best opportunities by taking advantage of the situations that occur during the race.

CYCLING PARTY has 3 levels of play: junior, senior and master according to the skill and experience of participants.

Junior level: play a game at the junior level and learn the basic situations of the race: pelotons, pacelines, breakaways and climbing mountain passes and try to win the stage with  your sprinter.

Senior level:  you will have to manage the different kinds of riders: Climbers, rouleurs, domestiques…

Master version: is the most complete and attractive version of the game. Create a stage race with the help of the game software and play an absorbing game with a multitude of prizes and variations: stage awards, the general category, climber, regularity, for teams… to play with your favourite riders by simulating the routes of the best stage races. Excitement and thrills guaranteed!

The Cycling Party manual is the result of more than ten years of development and testing carried out with the aim of offering an attractive game in each of its versions. One of the great virtues of the game is that players can build on their knowledge of the junior version in order to play the senior game and, in turn, when they have mastered the rules of the senior game, they can go on to play the master version.

One of the features of Cycling Party that set it apart from other games is this: we want to make it easy for you to learn to play with us. And the best way to do that is to use the videogame tutorial we have prepared specially for those of you who want to learn and have fun at the same time.

The cover art for Cycling Party is centred on the professional rider of Garmin-Sharp, Koldo Fernández de Larrea

Yes, it’s our way of thanking you. We cannot stress our gratitude enough. You are helping us to realise our dreams and as a token of our thanks you will see your name shown on our website.

$25
Be one of the riders in the downloadable video game
. Include your name in the digital version. Wear your team colours and go into history as one of the original riders of the “Cycling Party” official app. Learn how to play with the app. Put your name on your preferred rider and team. The team and number will be chosen in the same order contributions are made, i.e., the first person who makes a contribution will be first to choose a rider.

$50
Yes, it’s here, the most realistic cycling board game is yours. Be the first; get the game in its exclusive first edition.
$70

Get your first-edition copy of the game. Besides, make your name in the "Cycling Party" universe by being included in the video game and be an authentic reference in the "Cycling Party" universe. Learn how to play with the app. Put your name on your preferred rider and team. The team and number will be chosen in the same order contributions are made, i.e., the first person who makes a contribution will be first to choose a rider.

Get your first-edition copy of the game. In addition, obtain your exclusive “Cycling Party” maillot and be a rider both in the game and on the road (the maillots will be sent after determining the shirt size of each backer). The maillot bears the GSG brand, one of the most prestigious brands in the world of cycling and similar to the one in which the game’s authors appear in the video

Get your first-edition copy of the game. In addition, obtain your exclusive “Cycling Party” kit and be a rider both in the game and on the road (the kitss will be sent after determining the shirt size of each backer). The kit bears the GSG brand, one of the most prestigious brands in the world of cycling and similar to the one in which the game’s authors appear in the video

Get 5 units of the game, an special offer for specialised establishments that want to be the first to have “Cycling Party” in the exclusive first edition.

Get 10 units of the game, an special offer for specialised establishments that want to be the first to have “Cycling Party” in the exclusive first edition.

If we reach this target, when the hexagons used to make up the board are produced, we will be able to screen print these on both sides. In this way we will be able to increase exponentially the possibilities of creating different routes and of making the stages as long and as interesting as we want.

lf we reach this target, we will improve the quality and visual attraction of our counters, giving them a cyclist appearance and achieve even greater realism in our games.

If we reach this target, we will develop our videogame in iOS and Android platforms.It’s a enjoyed way to know the basic rules of Cycling Party and it would be for free. Therefore, you could learn to play wherever you are…

Leandro: Computer engineer specialised in CRM and ERP solutions. Cheerful and a little stubborn, he is determined to make CYCLING PARTY a reality. As a player he is a bit of a hard nut, a passive shooter, a tough negotiator and cold strategist, prefering to play with a reasonable amount of risk.

Diego: Chemistry graduate specialised in food safety. Inquisitive and enterprising. Turning an adolescent game into a reality has enabled him to realise a long-held ambition. When he plays CYCLING PARTY he is cautious, minimises risks and curses his legendary bad luck…but always with the desire to keep on trying.

As with so many other things, the germ of the idea that led to the creation of the CYCLING PARTY game we know today came about in a completely fortuitous manner. When he was a teenager, Diego used to spend the summer in Malaga with the rest of his family. There, they revived the popular “bottle caps” game, which they had all played when Diego was much younger. They all pitched in to develop the game by sticking trading cards of famous cyclists of the time to the caps and by formulating a number of basic rules. Using a piece of wood as a board, peseta coins as counters and felt-tip pens to mark out the course to the best of their ability, they created the basic components of the game. Each member of the family formed their own team: Banesto, Kelme, ONCE, Festina, and so on, which they personalised with their favourite riders. The first rules created at this time (most of which are still applied today) are largely responsible for the addictive appeal of the game. They played multiple-stage tours, similar to the master version of today’s game, but in order to calculate times and classifications they had to spend hours with a calculator, pen and paper. Several years passed before they were able to improve this facet of the game.

Back to the daily grind in Vitoria and keen to share the new game his family had invented, Diego showed a rudimentary version of the game to his friends in the garage of his house. He made a large, hand-painted board of sufficient size to show his friends, including Leandro. He explained the rules and soon they began to play the game, and boy how they played – for hours and hours! They became more and more addicted and added more and more rules.… CYCLING PARTY was a great success!!!
After playing the game many times and despite the many innovations they introduced to improve its playability, the game still had an important drawback: calculating the classifications was extremely laborious and time-consuming. However, by using his computer engineering skills, Leandro was able to develop the management software for the master version to make this whole process much easier. In this way, Cycling Party players were left to concentrate on their enjoyment of the game.
In the summer of 2012 and after 10 years of enjoyment and fun, the game’s creators decided to turn their dream into reality and began to develop and share the first prototypes of Cycling Party.

Snake Eyes Games is a new publishing company which is launching its first publication worldwide. We are European and we are producing our publications in our country and so, unfortunately, we are forced to add a small charge for shipments abroad.

For us, the most important thing is to be able to offer you an attractive game at a very competitive price. We try to absorb the shipping costs as much as we can and so, although there are, unfortunately, some costs, we want you to know that these are well below the real shipping costs.

Once again, many thanks to everybody for helping to make our dream a reality!

Rest of the world: Add $35 for your reward

UE, Switzerland and Norway: Add $15 for your reward

Rest of the world: Add $70 for your reward

"Cycling Party" is currently 60% complete and will be finished and launched regardless of the results of the Kickstarter campaign. All the funds raised from the campaign will be used to finish production and to make the improvements that we have described.

We have been working on this project for more than 3 years and after overcoming many difficulties we now want to tell the largest number of people about our project. What better way to that than with Kickstarter? We want to provide you with the best possible game and the added value of the App.

We realise that we are being very ambitious and that we will have to overcome many more obstacles along the way, but despite that we know that with your help we will achieve our ambitions.