"Legends of the Road" Assemble for Race Across America 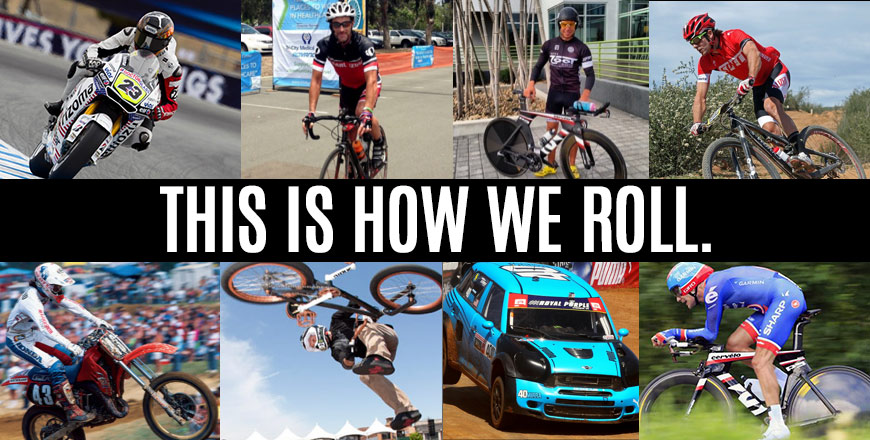 The Legends of the Road is a 4-person bicycle relay team consisting of the most decorated X Games athlete of all time, two multi-time AMA champion motorcycle racers and a 7-time US National Champion professional road cyclist. Dave Mirra, Micky Dymond, Ben Bostrom, and Dave Zabriskie join forces to race their bicycles from coast to coast in June 2014. Follow their escapades throughout 2014 in the video series, Riding The Line.

Each of our athletes has a carnal instinct that makes them push the limits every time they step into a race, no matter what the discipline. It’s this passion that Riding The Line will capture; showcasing these living legends in their various sports and coming together to compete as a team. The exhilaration, the sacrifices, the risks, the misery…all for that feeling that racing brings.

The Race Across America (RAAM) is a 3000 mile transcontinental race considered the pinnacle of endurance cycling around the world. The race has been around for 32 years, and draws competitors from over 27 different countries.

ABOUT RIDING THE LINE…

Riding The Line is a video series that follows four extraordinary characters on their unorthodox path to compete in the Race Across America as a 4-person relay team. The team is comprised of four world-renown athletes hailing from various two-wheel sports. In 2014, we will go in-depth with each athlete, following them through their “normal” lives of competing in sports such as motorcycle racing, professional mountain biking, Global RallyCross, triathlon, and more.

Dymond, Zabriskie, Mirra and Bostrom Take on The Race Across America

Four World-Class Athletes Head Out For Next Challenge in June

Denver, CO (April 17, 2014) – Not very often do four world-class athletes come together for a chance to become the fastest four-man team to participate in the famed 3,000 cross country road bike race, Race Across America. An endurance bike race unlike any other, what lies between is 3,000 miles of heat turning to cold, light turning to dark, flat roads turning to mountain passes, vitality turning to exhaustion, and the chance to achieve the glory of claiming the title, RAAM Finisher. Departing from Oceanside, California on June 14th and arriving in Annapolis, Maryland less than 9 days later, with a goal of finishing in 6 days.

Shimano and Pearl Izumi among others have come along side the team to make it a successful race. Additional sponsorship opportunities are still available. Visit the team website for contact information.

“As an endurance athlete my entire life, it has been a desire of mine to race RAAM, and I couldn’t have asked for a better team to come together. RAAM takes competition to the next level and we are up to the challenge,” Comments Micky Dymond.

A large part of RAAM is the charitable component. Teammate Dave Zabriskie has a passion for educating and bringing awareness to safety on the road between cyclists and vehicles. His organization Yield to Life will be the charitable beneficiary for the team. On top of that, the team has created an opportunity for fans and supporters to become directly involved by contributing to their race efforts online and the video produced to go along side it.

In addition to the race, a video series titled Riding The Line, will follow them on their unorthodox path to compete in the Race Across America. In 2014, Riding the Line will go in-depth with each athlete, following them through their “normal” lives of competing in sports such as motorcycle racing, professional mountain biking, Ironmans, and more.

Each athlete has a carnal instinct making them push the limits every time they step into a race, no matter what the discipline. It’s this passion that Riding The Line will capture; showcasing these living legends in their various sports and coming together to compete as a team.

To follow the team in their quest to become the fastest team in RAAM visit them online at www.TheLegendsoftheRoad.com and on Facebook.