'Wheels of Change: How Women Rode the Bicycle to Freedom' 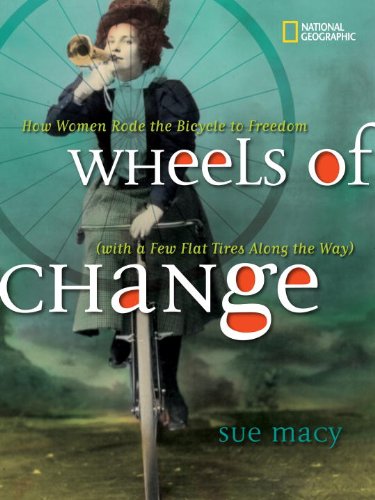 "Wheels of Change" tells the story of the impact of the bicycle on women’s lives from 1870s to the early years of the 20th century. It tells the stories of women who rode bicycles for fun, for profit, and to make a statement about women’s rights or women’s roles in the world. Illustrated liberally with photographs, maps, advertisements, and cartoons, as well as contemporary songs, poems, and newspaper clippings, the book helps readers travel to a time gone by to see firsthand how women used the bicycle as a vehicle to improve their lives. Witty in tone and scrapbooky in presentation with multiple sidebar features, Macy deftly covers the following subjects: Inventing the Bicycle – an amusing look at how women first took to the ‘wheel’; ‘The Devil’s Advance Agent’ – how early objections to women’s cycling on health and moral grounds gave way to an appreciation of the health benefits of cycling; and, rational Dress – how the bicycle freed women from whalebone corsets and led to permanent changes in women’s dress and style (Plus the abomination of bloomers). It also includes subjects such as: Fast and Fearless – women and the thrilling, but sometimes shady, early world of bicycle racing, with profiles of female racers and accounts of races, including one in Nassau County, New York, that was stopped after the district attorney decided it was improper, immoral and illegal to make such an exhibition on the public highway; and, New Freedoms – the bicycle as a means for social change, its part in the women’s suffrage movement, and why Susan B. Anthony declared that it has done more to emancipate women than anything else in the world. It comes with additional testimonies from Elizabeth Cady Stanton, France Willard, and other leaders of the early women’s movement. Full-spread features range from Celebrity Cyclists to Cycling Songs. A timeline of cycling runs parallel to a timeline of women’s history. Profiles of famous women cyclists, including Amelia Bloomer, are included, as are primary source excerpts from newspapers and novels of the day.

My former boss used to ask everyone she interviewed for a job the same question: “What were you like as a kid?” We worked in children’s publishing, and she thought people’s answers would tell us a lot about how they would approach their jobs. She was right.

So now it’s my turn to answer the question. What was I like as a kid? Well, I was always competitive, which probably has a lot to do with why I like sports. I tended to play active games like catch and touch football and “Cowboys and Indians.” I was a real tomboy. I never played with dolls and had limited patience for games in which you pretended to stay home and “keep house.”

I grew up in a New Jersey suburb, just 25 minutes from midtown Manhattan. My family used to go into New York (“the City”) often, to visit museums or watch baseball games or eat at the Automat, a cafeteria-type restaurant where individual servings of food stood behind glass doors that opened when you put money in a slot. New York seemed like a magical place when I was young, and it still looms large in my life. Having the City at my back gives me a frame of reference when I look at the rest of the world.

My dad was a certified public accountant, which means he worked late several days a week every income tax season, from January till April 15. That was enough to convince me to choose a different career. Tax season even affected my parents’ wedding date. They got engaged in December, but had to wait till after April 15 to get married.

My mom taught business classes in high school before she quit to become a homemaker. Later, she did computer work for my dad’s firm. She’s involved in lots of charities and once edited the newsletter for her woman’s group. My mom is also a great cook and a terrific baker. Some of her skills rubbed off on me, although I definitely don’t have the flair that she does.

I have one brother who’s two and a half years younger than me. As kids, our relationship was a little bit like that of the Peanuts characters Lucy and Linus. I was definitely the bossy older sister, and I often lost patience with my sweet, younger brother. We had our share of fights, too, although they were usually verbal rather than physical, since he’s pretty strong. Now we get along a lot better.

I was a good student and particularly loved history and math. Chemistry was my downfall. I don’t know if it was the subject matter or the World Series. The year I took chemistry, the New York Mets played the Baltimore Orioles in the Series. Our class was scheduled for the last period of the day, so our teacher let us listen to the games, which were all played in the afternoon back then. Despite living so close to New York, I was a dedicated Orioles fan—the only one in the class. I never got over hearing my team lose the Series in five games while my classmates cheered. For the rest of the year, I got a sinking feeling in my stomach every time I went to chemistry.

When I got to college, I planned to study politics and become a lawyer, but I ended up majoring in history and American studies. It was the early 1970s, and “Women’s Liberation” was in full swing. My school, Princeton University, offered a student-initiated seminar in women’s studies, led by two young professors. One of them became my advisor, and I became her research assistant. She was working on a study of early women’s prisons in the United States. I did my senior thesis—a year-long research paper—on Alice Davis Menken, a Jewish woman who worked to reform delinquent Jewish girls in New York City in the early 1900s.

Many of my college friends went on to medical school, but I had no desire to sign up for more schooling. Instead of writing papers for professors, I wanted to earn money for my work. After a long search, I found a job at Scholastic Inc., helping out on a new American history textbook for high school students. As research coordinator, I traveled all around the United States collecting original letters, diaries, and other papers for the author to use. It was an amazing experience. I got to see the country, stay in hotels, and learn how to get along on my own.

I ended up working at Scholastic a total of 16 years, leaving every so often for other jobs, but then coming back for something better. Scholastic is where I developed my writing skills and my editorial standards. Almost every editor in children’s magazines today—as well as many children’s authors—worked at Scholastic at some point in their careers. The company was a sort of finishing school for writers and editors, giving us hands-on experience that was much more authentic than what we would have learned in graduate school.

Although my art editor designed this logo as a joke, I’ve always iiked it!

While I was editing Scholastic’s math magazines—DynaMath and MATH—I started spending my weekends researching and writing about women in sports. This was in the 1980s, when female athletes had more opportunities than ever. But I was curious about the women who had played sports before it was popular to do so. I’d written a paper in college on three early female tennis players and I knew there had to be more women who had “dared to compete.”

I found some of them through a book called First of All: Significant “Firsts” by American Women, by Joan McCullough. The book only devotes a page to the All-American Girls Professional Baseball League, but it opened up a new world for me. I spent 10 years talking to players and reading their scrapbooks, and that led to the publication of my first book, A Whole New Ball Game, in 1993. It also led to cherished friendships and a long-term involvement with the “All-Americans.”

I spent six years on the board of directors of the All-American Girls Professional Baseball League Players Association, the group that organizes reunions and educates the public about the league. I’ve continued to be inspired by the players, and by other women who broke barriers to play sports or otherwise make their mark. I admire the courage of ornery women who won’t take no for an answer. Their stories encourage me to try and be a little ornery myself.