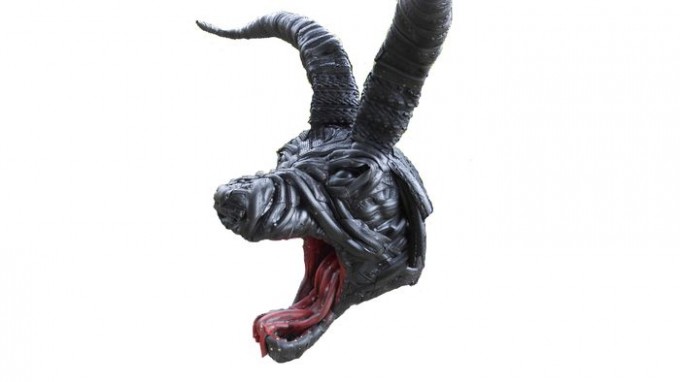 The Irish sculptor, Mick Davis, has found a way to take discarded bicycles tires and turn them into art.

Davis has been taking used rubber (no, not prophylactics) and transforming it into interesting and ominous forms of art – busts of humans and animals.

After transitioning from his usual medium of stone, Davis has created several human and animal exhibits in the experimental material.

‘I was pleasantly surprised at the versatility of the tires and how suitable they are for making human and animal forms,’ he said.

To create his sculptures, Davis begins by welding a steel armature to which he then applies wire mesh. Automobile tires are initially used to form the basis of the design, along a mesh frame work. Form there, bicycle tires are screwed to the existing form as to create the intricate detail.

According to Davis, many different types of bicycle tires go into the design of his sculptures. For example, smooth, flexible road bike rubber is used for detailed work, while hybrid and mountain bike tires are used in areas that require more texture. All the tires used in his sculptures, come from local bike shops, who would otherwise discard them.

Davis is passionate about recycling, and hopes that his work will help to change the way people look at used tires. He’s currently sourcing funding to pay for bills and equipment to produce a dozen or so pieces on the human form over the next 12 months.