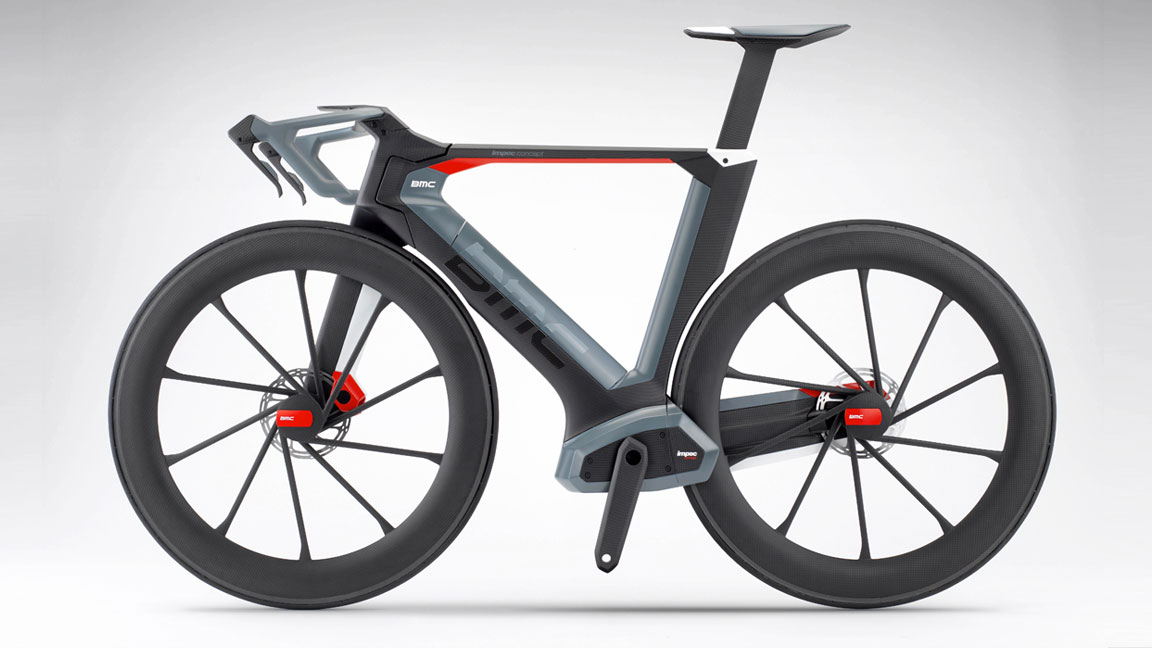 Built using the Swiss brand’s "impec" manufacturing process, it’s clear that the concept bike was an exercise in aerodynamics, wherein radical tube profiles, a one-piece integrated handlebar and stem, propriety brake levers and shifters, a computer that sits flush in the handlebar and the absence of a rear triangle and an abbreviated fork – comprise the bike.

But, what’s most fascinating about it, is the neatly concealed drivetrain. One could can only wonder if it’s destine to be electric powered ?

It will be interesting to see if such a design, or some variation thereof, ever makes into production sometime in the near future.

As a cyclist, you want a bike that represents you; your personality, your ride style, and your needs while out on the road. Is position on the bike your main priority? Maybe longer rides force you to become a combined mobile service station and food truck, with an extra tire, tube, pump, and enough food to feed an army? Or perhaps several hundred thousand kilometers ridden on a standard chain-driven machine has created a burning desire within for an entirely new ride experience? We have been listening to inputs from riders and professional athletes for years which has greatly influenced a unique collaborative approach to frame design. We’ve come up with a structure that is highly modular yet enables the integration of external add-ons such as a gearbox or an electric motor. We’ve found other functions for existing structures such as turning the down tube and seat tube fairings into batteries. We looked at aerodynamics and functionality and broke the rules just how we like it—exactly on our terms, with our people, at our R&D lab.

Regardless of rider priorities, the future of performance cycling mandates that a bike should accommodate each and every rider on the road. Based on a relatively simple structure the “base” of this frame allows for incredible modularity and integration through external add-ons. Add-ons and fairings serve two purposes that are intrinsically connected: improving aerodynamics and tidying up appearance. By integrating cables, tools, pump, water bottles etc. basically everything that you would bring on a bike ride anyway results in awesome functionality and beautiful visual integration.

A shift in gear: an integrated gearbox.

Rather than stick with derailleur gears, we created an integrated gearbox which means less drag and a lot less maintenance. After all, less time tinkering means more time riding. With space for either an internal gearbox or an e-motor, speed becomes a simple choice—use all your own power, or enjoy a bit of help. How about adding a specific handlebar for the e-bike version? Done.

Ever heard of Chris Boardman? Thought so. He won an Olympic gold riding a single-sided machine that minimized as much frontal area as possible. As it turns out, CFD software confirms he was on to something then, and we believe it’s just as relevant now. Any athlete searching for an aerodynamic advantage knows that the rider is the largest obstacle to speed. But in this age of high-performance bicycle fit and performance testing, it’s clear that optimizing rider position is no longer a competitive advantage. Enabling the rider to maintain a good position while retaining the absolute maximum aerodynamic advantage—this is the golden topic. We developed a twin-stem to optimize aerodynamics without compromising steering precision, a comfortable, ergonomic handlebar that minimizes the frontal area to reduce resistance, and a saddle mount that cleans up airflow. The result means absolutely no sacrifice to rider position, lateral stiffness, or weight. Bingo.

What’s hot and what’s not? Disc brakes—on both accounts.

Excellence in design doesn’t happen in isolation, but when the big picture and the end-use has been fully understood. Disc brakes are a very real feature on the latest road bikes and nearly every major brand and component manufacturer are pursuing them. It’s here, it’s real, and it’s improving every day. But, until now, disc brakes for road use have been problematic; inconsistency in breaking performance and over-heating during prolonged use being the primary challenges. The product development of disc brakes has also been mostly left in the hands of the manufacturer. We have been focusing on frame solutions that address both aerodynamics and overheating.

Comfort where it counts: the saddle.

We’ve been thinking about saddles. What about making the shell and seat post attachments just one piece? As opposed to the traditional shell/rail/clamp arrangement? We could reduce the weight, reduced the drag, and while we were at it, maintain all of the adjustability of a traditional seat/saddle interface. We could have simply made a post with a skinny profile, but that would have compromised lateral stiffness and handling. Our solution is lighter, laterally stiffer, fully adjustable, and more aerodynamic. Put simply—it makes the most sense.