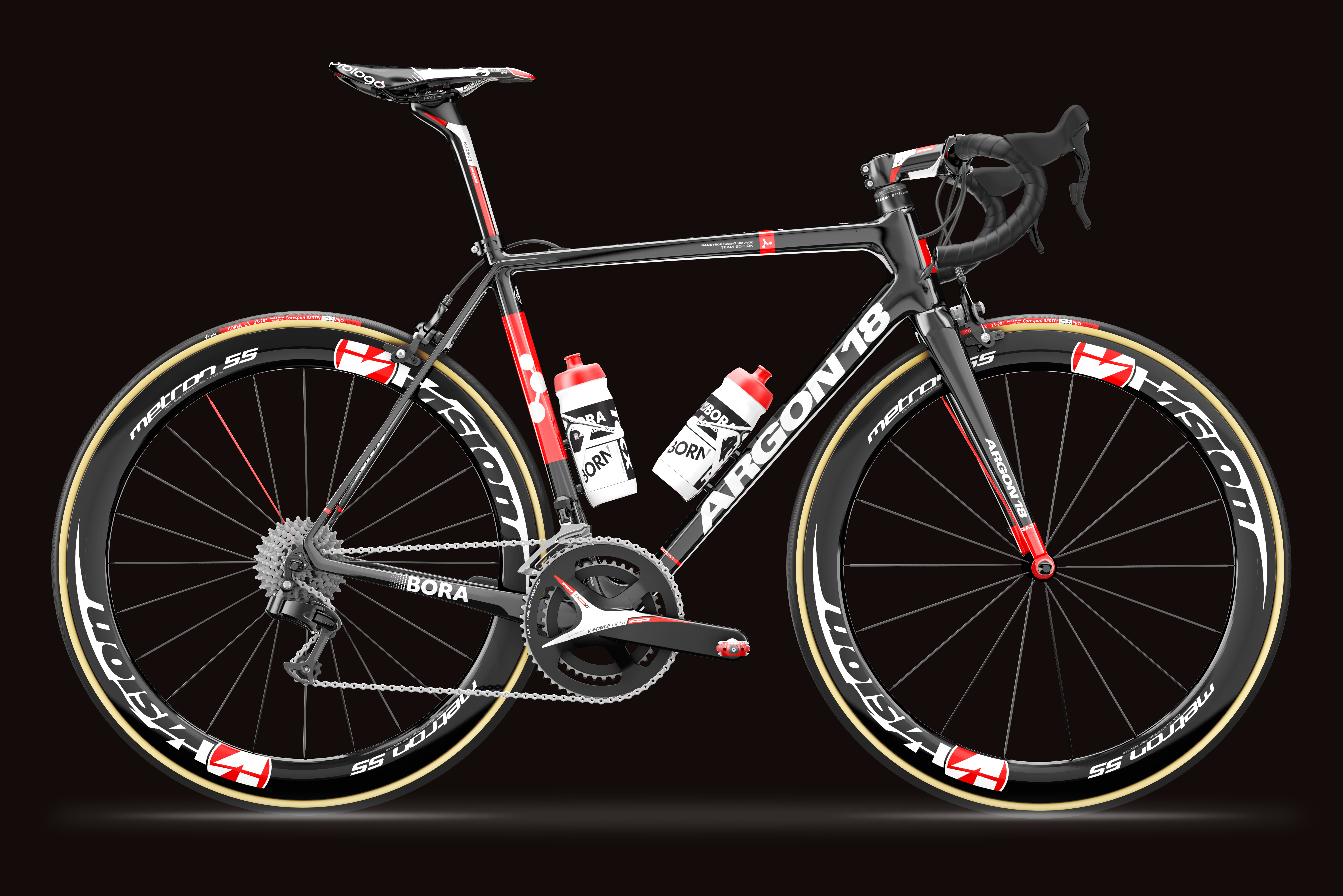 The BORA-Argon18 Team, issued a press release this week, detailing their range of team bikes for 2015.

In addition, to the Canadian-based Argon18 bikes, the team will also be supported by such products as  Vison wheels, Speedplay pedals, Prologo saddles, FSA and power2max power meters.

The German professional cycling team, BORA – Argon 18, is heading into the new season with firm optimism as it will rely on Argon 18 bikes to express the full extend of its riders skills and thirst for success.

"The delicate equilibrium between light weight, rigidity and comfort is the cornerstone of our bike development process. We believe optimal performances come from an optimal balance of these three characteristics.  We don’t compromise, so the riders don’t have to either when the result of a race hangs in the balance" says Gervais Rioux, founder and president of Argon 18.

The Gallium Pro incorporates a solid grasp of traditional time-tested cycling knowledge and cutting-edge technological research and advancements. With its outstanding stiffness to weight ratio, response is even more immediate and handling is razor-sharp on any terrain.

“The Gallium Pro accelerates incredibly well, whether sprinting or taking a hard pull in a breakaway situation” Gervais Rioux continued.

The Nitrogen will likely become the weapon of choice of BORA – Argon 18. Sprinters and breakaway riders alike will embrace its superior aerodynamics and unmatched handling. Based on the same refined geometry as the Gallium Pro, the transition from a pure road bike to an aero road bike is seamless.

This flagship time trial bike’s front end was redesigned and streamlined to be lighter, more integrated and yet offer the exceptional adjustment options the E-118 was already famous for. The E-118 Next will become the riders’ best ally when it comes down to shaving off precious minutes off their time.

The only German professional cycling team will line up next season as a UCI Pro Continental team under the name BORA – Argon 18. With the issue of the license by the UCI, the new name is now officially registered.

"As in every year of the team’s history to date, we also received the license for 2015 at the first attempt from the UCI. Our thorough and conscientious preparation paid off. Above all I would like to thank my new partners, who were involved in this process for the first time. Our smooth cooperation puts me in a very confident mood for the coming season," says Team Manager Ralph Denk.

Along with BORA, the German manufacturer of cooktops and cooktop extractor systems, the Canadian bicycle manufacturer Argon 18 will be a new name sponsor for the team in the coming season. With the arrival of these two companies the team will now also be sporting new colors. As of 2015 dark shades and a contrasting red, as well as a rather classically designed jersey will dominate the look.

"BORA and Argon 18 harmonize perfectly," continues Denk. "Both companies develop high-quality products and the design specifications of the two name sponsors were very similar. So we very quickly reached agreement on the look for the next season. Together with our new clothing supplier, Craft, we sorted out the details, and our new helmet partner, the German company ABUS, is slotting in seamlessly. The visual appearance is a complete success – the team’s riders and partners are delighted and spirits are rising in anticipation of the new season.”