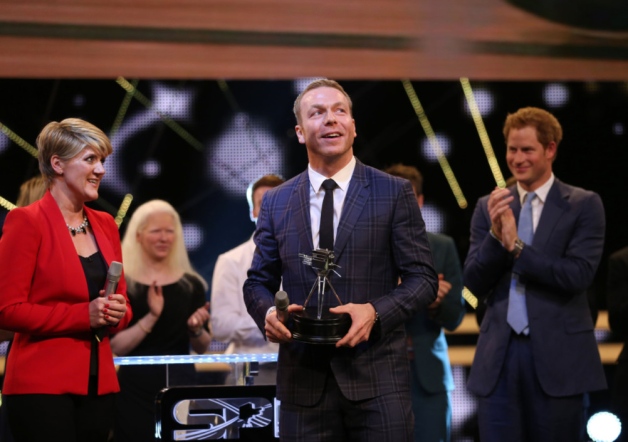 "It’s very hard not to get emotional when you hear amazing words from people you respect massively and to get this type of reception. This is really special to me,” Hoy said during his speech.

“I looked at the names who have won this trophy before me, Seve Ballesteros, Pele, Martina Navratilova, Bjorn Borg, the list goes on and on. To think that my name is going to be next to theirs is unreal.”

Hoy retired from track racing after the 2012 Olympic Games in London, after claiming victory in the Keirin ahead of the German Maximilian Levy. Hoy also has a silver medal from the team sprint in Sydney 2000, bringing his total medals to seven. Only fellow Briton, Bradley Wiggins, can match Hoy in terms of numbers of medals, but the 2012 Tour de France champion has two fewer gold medals than Hoy.

"He is the marker for everybody else because he was, in some ways, the model athlete off the bike as well as on it," said Wiggins. "He’s right up there, not only for British athletes but in terms of world athletes. I put Chris up there with the Usain Bolts of this world."

Hoy dominated the team sprint and the one kilometer time trial events. However, when the kilo was removed from the Olympic program after the Athens Olympics in 2004, he was forced to target the keirin and individual sprint.

Four years later he went on to take three gold medals in Beijing in the team and individual sprints, and the keirin. In 2012, Hoy ended his career with 37 medals (19 gold) at international level.

“Chris has always been the gold standard of what they want from an athlete,” said fellow sprinter Victoria Pendleton. “I know how much it hurts and he was the master of pushing himself to that place time after time. I think that he secretly enjoys it a little bit… He’s a massive role model and inspiration.”