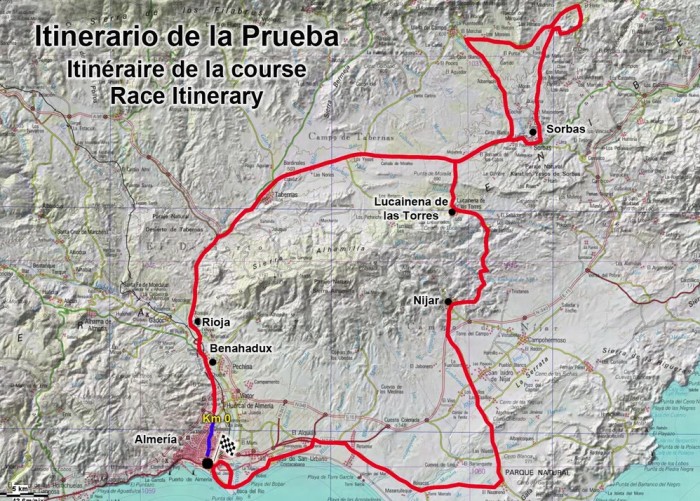 Mark Cavendish continued his impressive start of the season, by winning today’s Clasica de Almeria, in a sprint finale – beating Juan Jose Lobato (Movistar), while his teammate and lead-out man Mark Renshaw rounded out the podium in third.

From there, the escapees over time, built up a sizable advantage of 5:30 over the peloton.

The first rider over the top of the El Chive climb, was Sicard, while Van Overberghe and Intziarte lost contact with their breakaway companions.

However, as the remaining trio reached the Lucainena climb, their lead had been reduced to 3:15.

The final 60 kilometers was largely downhill or flat, while the peloton continued to chase the three escapees in earnest.

Etixx – Quick Set, along with Katusha and Movistar, led the chase as the race made its way back to Almeria.

A crash just two kilometers from the finish, ruined the chances of MTN-Qhubeka, who was hoping to move their man Tyler Farrar into position to contest the sprint, as well as Trek Factory Racing, who was hoping the same for Fábio Silvestre.

In the end, Etixx-QuickStep found themselves in perfect position to  avoided the crash, with Renshaw again using his skills to lead out Cavendish for the win.