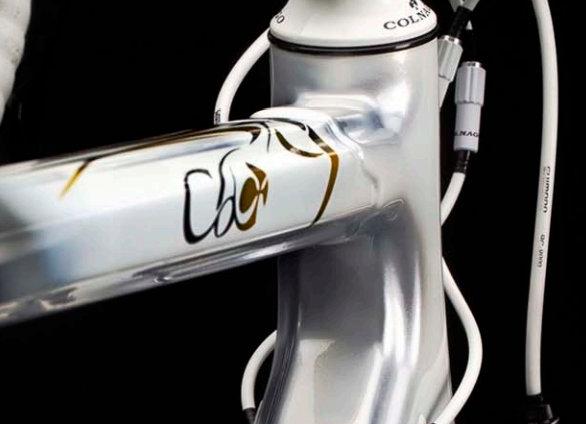 Rumors of a new Colnago C60 have been whirling about for over two years now. However, as of this week, the iconic Italian brand has announced, albeit cryptically, the official launch of it’s new flagship bike.

According to Colnago, the C60 will be available in both disc and non-disc brake versions.  In addition, the new frame will feature an all-new bottom bracket press-fit design, along with oversized tubes and new alloy dropouts, which Calnago says contributes to a frame that is significantly stiffer and lighter than the current C59. Moreover, the C60 Disc is claimed to be 140g lighter than the C59 Disc.

There’ll be no round tubes for the C60. Indeed, according to Colnago the new model will utilize star-shaped tubes and lugs that are similar to their famous Master steel frame. To wit:

“Star-shaped tubes are a proven design element and have become a signature design element for Colnago frames,” says Colnago. It adds that the full-length star shape “allows better control of the wall thickness and lamination of the entire length of the tube” which it regards as a step forwards for strength and comfort."

The hallmark of the C60’s increased stiffness, is predicated on an all-new bottom bracket design. According to Colnago after assessing other current designs, they felt none were sufficient in this application. So, therefore, they created their new ThreadFit82.5 system.
Colnago says the key to their new BB design, lies in a wider shell, along with removable threaded sleeves which can easily be replaced. Moreover, it’s compatible with all versions of Pressfit 86.5.
Indeed, by making the bottom bracket shell wider, Colnago was able to increase the diameter of each tube that conjoins at the location of the BB (i.e. down tube, seat tube and chainstays) .

With the new bottom bracket Colnago was able to increase the diameter of the downtube to  66x52mm square section – up from about 44mm of the C59. Furthermore, Colnago claims this leads to more efficiency, while also reducing weight. Again, who’s going to doubt the "master" ?

Wider too is the new seat tube, with a maximum width of 51.5mm, as compared to the C59’s 34.9mm. Also, Colnago chose to stick with a 31.6mm post, saying the reason is to “maximize lateral stiffness and quick response to handling input favored by Colnago’s professional racers.”

The chainstays are much larger as well. In fact, their thickness almost doubles at the junction of the BB, as compared to the drop-outs. Meanwhile, internal reinforcing ribs further add to the stiffness of the "stays" as well.

Another new feature to the C60 is, CNC-machined one-piece aluminum dropouts. Colnago claims they’re both lighter and stronger than dropouts made from carbon, and, perhaps, most importantly, they’re easily replaceable.

Lastly, the new dropouts have been developed with disc brake compatibility in mind as well.

The disc-specific dropouts mount the brake caliper inside the rear triangle, and use co-moulded post mounts with threaded inserts. They’re claimed to be lighter and stiffer than the disc mount dropouts used on the C59. Rear wheel spacing is a standard 135mm.